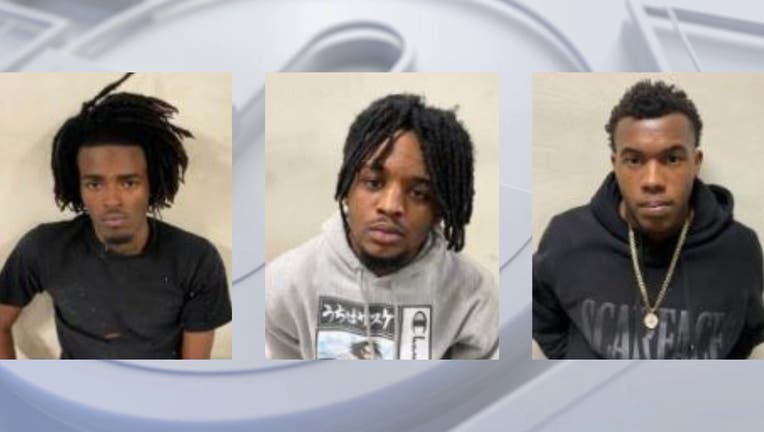 SAN BERNARDINO, Calif. - Four people were arrested for the armed robbery of a Los Angeles cell phone store after leading police on a chase through San Bernardino, officials announced Wednesday.

According to police, the four were responsible for an armed robbery at an AT&T store earlier that day. Officers said the thieves forced an employee to open the store safe at gunpoint, taking more than $30,000 worth of cell phones and other devices before driving away in a charcoal BMW.

Officers used the GPS systems in the stolen phones to track them to San Bernardino. There, they began searching for a vehicle that fit the description of the thieves'. They found the vehicle they were searching for around 6:45 p.m., near the intersection of Baseline Street and Waterman Avenue.

When officers stopped the car, the two people in the back seat got out and ran. Officers ran after them and quickly caught them. San Bernardino Police said one of the two threw away a hand gun while running from officers. While the two in the back seat ran on foot, the driver and the passenger tried to drive away, according to officials. The driver crashed the car shortly after, and the two left in the car tried to run as well, police said.

All four were arrested. When officers searched the BMW they found more than 30 stolen cell phones and tablets. The four were booked on robbery charges, and officers said that they believed the group was responsible for other similar robberies throughout the region.