An investigation was underway in Chino after two people were killed and one person was injured when a Chevrolet Corvette plunged into a backyard pool in Chino the morning of July 7.

CHINO, Calif. - Two people were killed and another person was injured after a car plunged into a backyard pool in Chino early Wednesday morning, police said.

Just before 2:30 a.m., the Chino Valley Fire District and Chino Police Department were called to a home located in the 3600 block of Alicia Way near East End Avenue following reports of a crash into a resident's backyard and landing into a pool. First responders discovered what appeared to be an orange Chevrolet Corvette with severe front-end damage and in pieces. 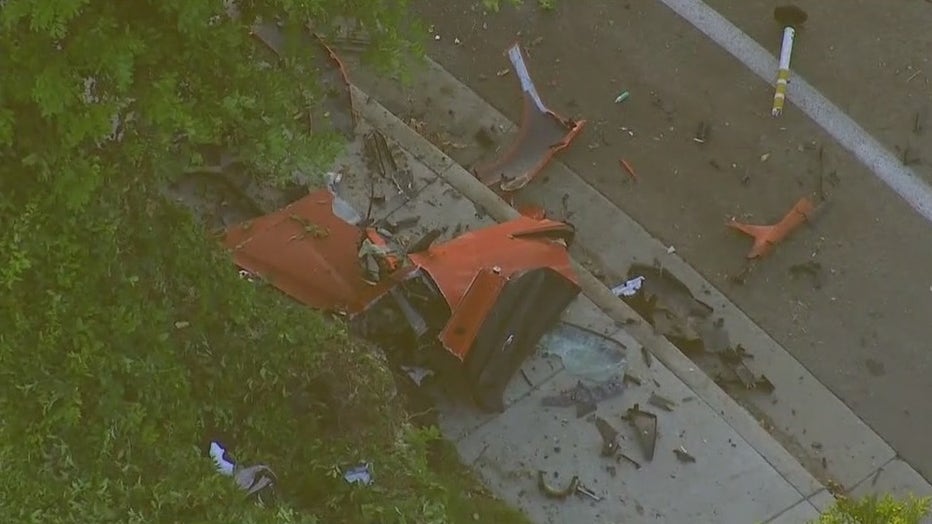 Firefighters found three people had been ejected from the vehicle. The driver and one of the passengers were rushed to the Pomona Valley Hospital. The second passenger, a 21-year-old woman, was pronounced dead at the scene, Chino FD officials said.

According to officials, the male driver in his 20s was taken to the hospital in critical condition where he died.

Investigators believe speed may have been a factor in the deadly crash. The preliminary investigation reveals the driver was speeding westbound on Shafer Avenue when they failed to turn, went airborne, crashed into a wall, and flew into the pool. The posted speed limit in the area is 15 mph and police said the driver may have been unfamiliar with the area.

Two people were killed after a car plunged into a backyard pool in Chino on the morning of July 7.

"It was a big old crash. I heard ‘bang,’ and I looked outside my window and I saw something in the pool. I wasn’t sure what it was," a neighbor said.

Neighbors who spoke with FOX 11 said speeding has been an ongoing issue in the area.

"It’s just ridiculous. It’s not necessary to be speeding in a residential area," another neighbor said.

Officials were in the early stages of the investigation and no further information was immediately available.