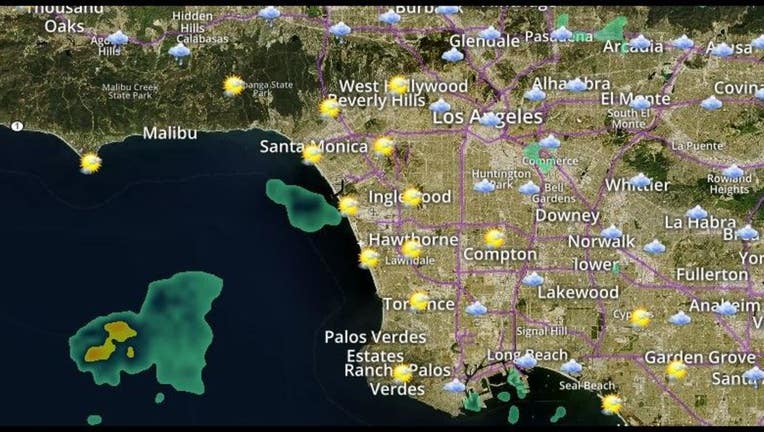 LOS ANGELES, CA (CNS) - The storm system that brought rain, gusty winds and cooler temperatures to the Southland is expected to linger on Sunday.

The first wave of rain arrived just after 1 p.m. Saturday and was largely over by midnight, Bruno said, with a second wave expected late Sunday morning in the form of showers. That rain is expected to let up later and be gone in time for the Hollywood Christmas Parade, which is scheduled to begin at 6 p.m.

How much rain the system will generate was uncertain, although the volume was expected to be "not too heavy" -- between a quarter-inch and three-quarters of an inch of rain generally but possibly more than an inch
in the foothills.

The storm might cause the snow level to drop to 4,500 feet. That could result in snowfall on Interstate 5 in the area of the Grapevine.

With the storm's arrival, temperatures are dropping sharply -- between 10 and 13 degrees throughout Los Angeles and Orange counties. Downtown Los Angeles, for example, dropped from 77 on Friday to 66 Saturday, while Saugus went from 75 to 62.

Temperatures will fall another few degrees on Sunday, forecasters said. Sunny weather is expected to return Monday but temperatures will remain in the 60s with a mild warming trend later in the week.