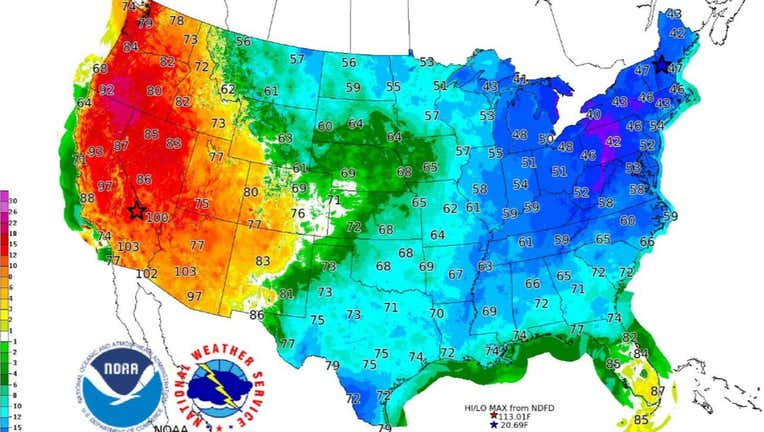 A contrast between temperatures on the West and East Coast on Saturday as a portion of the polar vortex brings bitter cold air to the Northeast. (NWS WPC)

Absent for the entire winter, the polar vortex is blasting in with bitter Arctic cold across the eastern U.S. for Mother's Day weekend, and setting the stage for a possible historic May snowstorm in the Northeast.

"This is going to be a record-breaking weekend," Fox News senior meteorologist Janice Dean said Thursday on "Fox & Friends."

The cold air mass will cause rain from a system moving out of the Tennessee Valley to change to wet snow that could be heavy over the central Appalachians Friday. The storm system then intensifies further as it skirts the New England coast, according to the WPC. 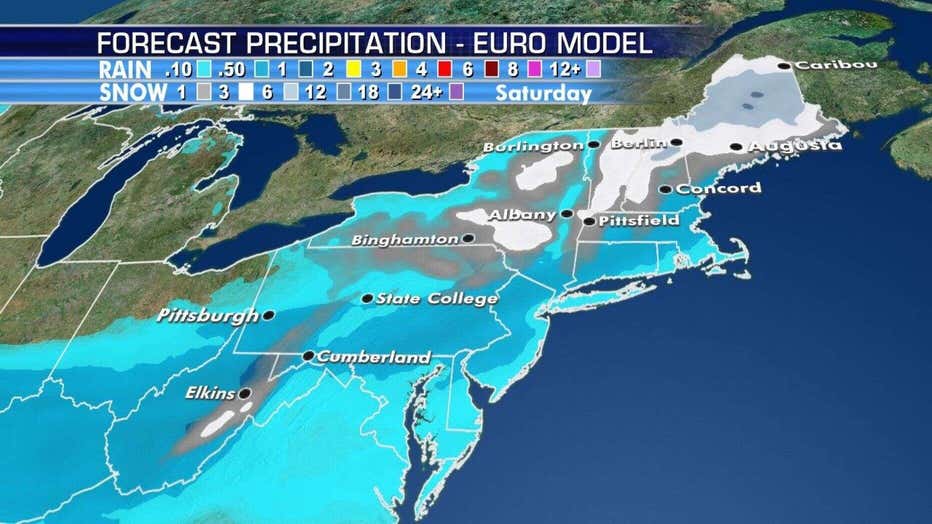 The interior Northeast may see a historic May snowstorm as the polar vortex ushers in bitterly cold Arctic air.

"The potential for heavy snow over portions of the higher terrain of northern New England Friday into Saturday is increasing," the WPC said. "May daily snowfall records may be shattered, with several inches of snow possible."

Forecasters said that across the higher terrain of western and northern Maine, isolated snowfall could approach a foot, which would "shatter" May daily snowfall records.

"Although daily snow in May across New England is not extremely rare, daily snowfall records for the month are possible," the WPC said. 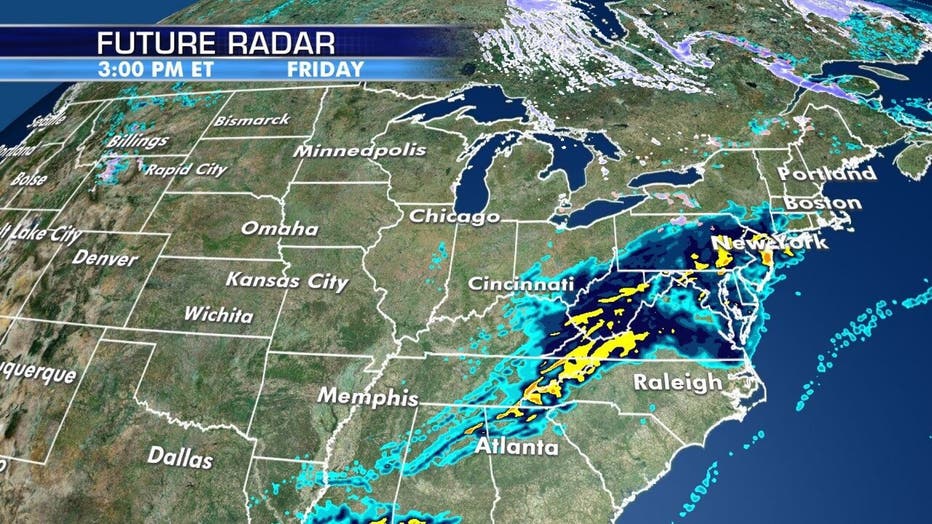 A storm system moving out of the Tennessee Valley is bringing rain that will change over to snow as it meets with cold temperatures arriving in the Northeast.

Even higher elevations in the Mid-Atlantic could see snow. The NWS Baltimore/Washington D.C. forecast office said that a storm system on Friday ushering in cold air may lead to snow in higher elevations of northwestern Virginia, Western Maryland, and West Virginia.

"As colder air rushes in behind the front Friday evening, there will be a transition from rain to snow showers along the Allegheny Front with minor snow accumulations likely," forecasters said. "Further east, not expecting accumulating snow, however some wet flakes mixing in remains a possibility along and west of the Blue Ridge." 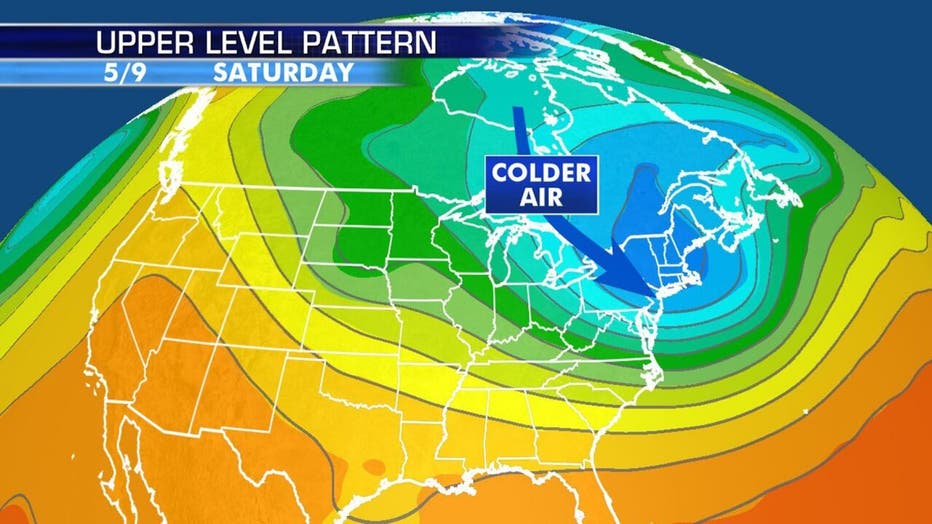 An Arctic blast is forecast to impact the Northeast for Mother's Day Weekend.

Some snowflakes could reach areas closer to Washington, D.C., early Saturday morning. But the chance of snow in the district is quite low, according to FOX5, which notes that the nation's capital has never seen measurable snow in May, as far back as the 1880s.

For those who do not see snowfall, a chilly rain is expected Friday into Saturday. 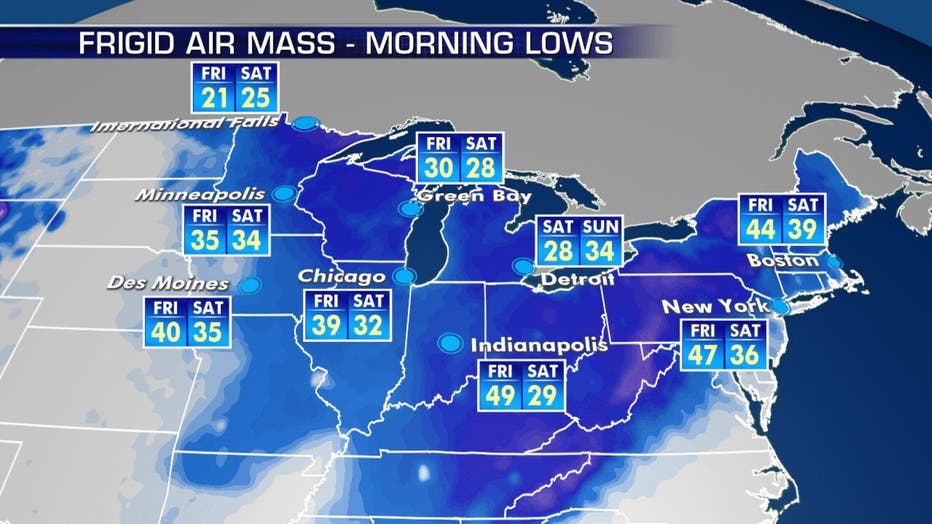 Besides the threat of snow, the eastern third of the country will get record-low temperatures, with the Great Lakes and the Northeast seeing the coldest conditions. 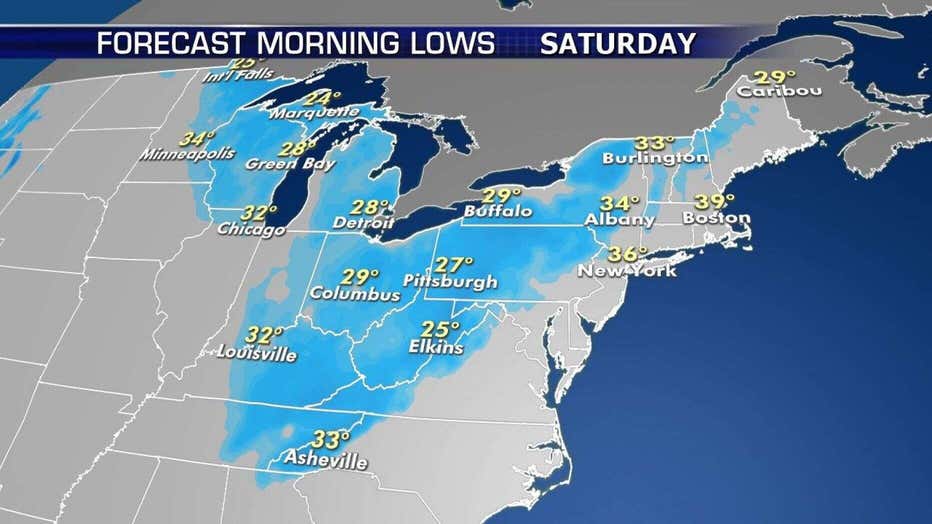 The coldest air will arrive by Saturday morning.

Temperatures are forecast to be higher in Fairbanks, Alaska, than in New York City, Philadelphia, Cleveland, and even Atlanta over the weekend. Widespread record low temperatures will span as far south as Alabama and Mississippi on Saturday. A high of 80 degrees is expected in Fairbanks on Mother's Day. 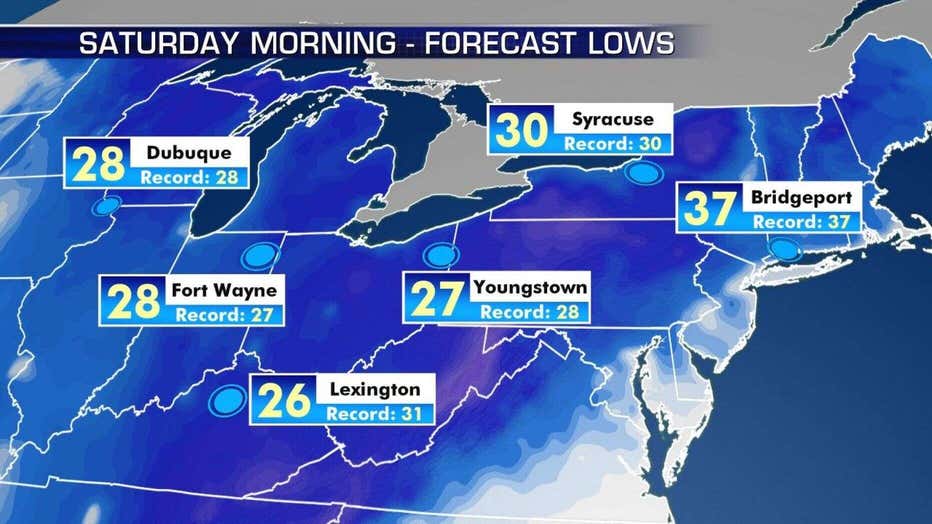 Record-cold temperatures may be broken on Saturday due to the blast of Arctic air.

“The potential for record lows across portions of the Great Lakes and the Northeast -- so something to, you know, remember Mother's Day by," Dean said Thursday. 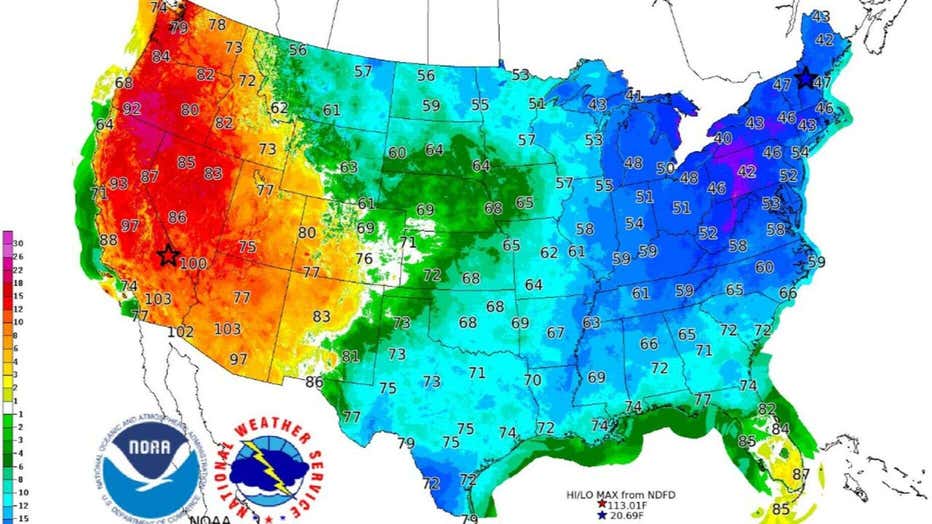 A contrast between temperatures on the West and East Coast on Saturday as a portion of the polar vortex brings bitter cold air to the Northeast. (NWS WPC)

Frost advisories, freeze warnings, and freeze watches already stretch across the Great Lakes into the Ohio River Valley and high-elevation locations in the Southeast.

“Over some areas, this cold surge would lead to a late frost/freeze where the growing season has already started,” the NWS said.

Climatologist Judah Cohen said on Twitter that a strong blocking near Alaska, which is giving the state the warm temperatures, is forcing the rare appearance of the polar vortex in the Northeast and the possibly historic snowstorm.

This rare visit from the polar vortex over the weekend will only last for Mother's Day weekend before temperatures eventually get milder next week.

As the eastern half of the country bundles up for the cold blast, the opposite is happening out west. 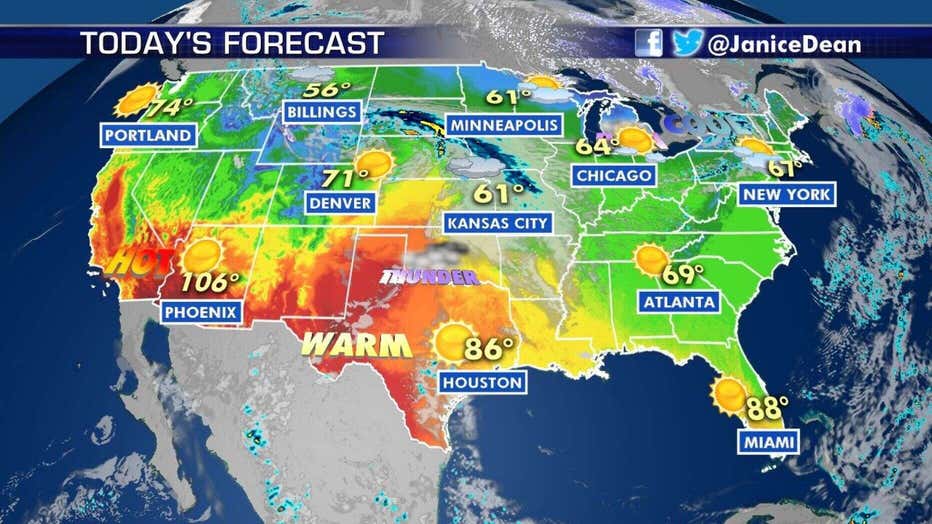 Hot weather continues out West on Thursday, as the Northeast braces for a shot of Arctic air. (FOX News)

Near-record heat is expected again for Southern California, the Desert Southwest and the southern Rockies.

Strengthening high pressure will mean excessive heat and wildfire threats across the Southwest into Southern California, with above-average temperatures expanding into the Pacific Northwest this weekend, according to the WPC. 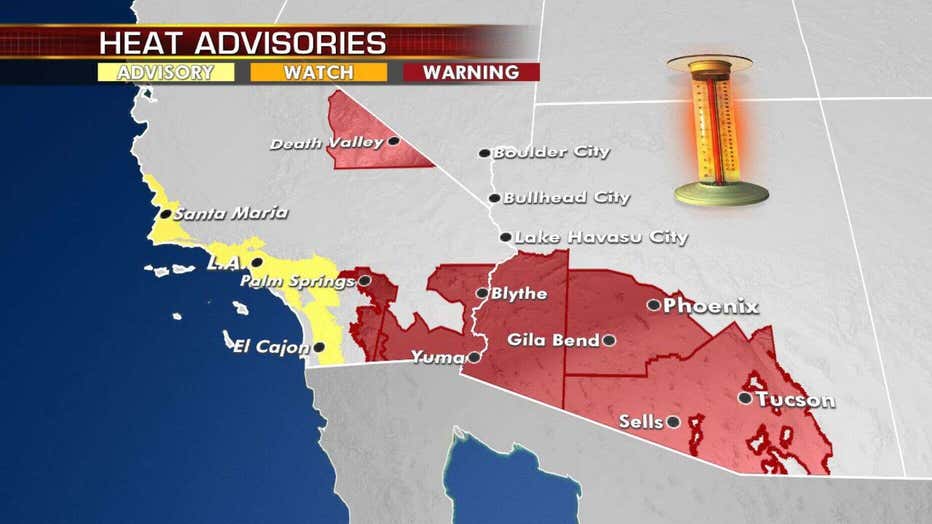 Excessive heat warnings and advisories are in effect out west as hot weather continues.

In addition to the heat, fire risk will be very high Thursday over much of the southern Rockies as a low-pressure system that could bring severe weather develops over the central Plains.