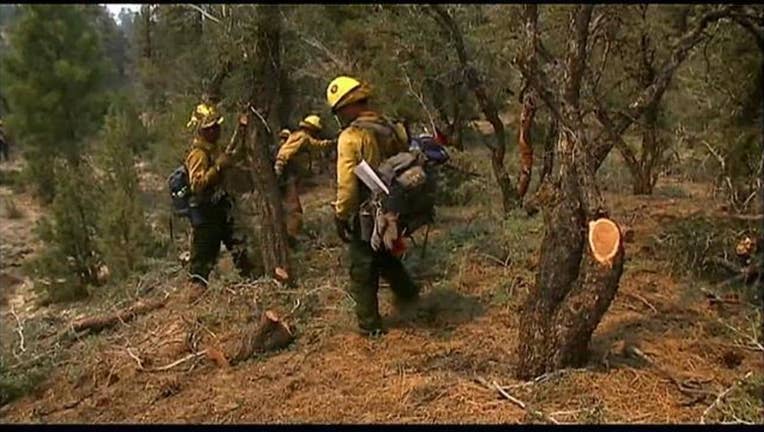 A huge, week-old wildfire roared to new life in the rugged terrain in Southern California's San Bernardino Mountains, threatening threatened thousands of homes and other structures as it stretched northeast into the desert.

The blaze about 90 miles east of Los Angeles has consumed some 40 square miles - nearly a quarter of that in the last two days. The tiny Mojave communities of Burns Canyon and Rimrock were ordered to leave their homes Thursday. Evacuations were voluntary in nearby Pioneertown, where Old West-style wooden buildings were constructed for use as a movie set in the 1940s.

At Pappy & Harriet's Pioneertown Palace, a landmark restaurant and music venue, owner Linda Krantz got updates on the fire from forest rangers in parked trucks. She could see a huge plume of smoke from the fire that ran onto a wildlife preserve just five miles away.

Crews relied on retardant-dropping aircraft to battle the hard-to-reach fire, which began June 17 in mountain wilderness. Officials say they had to temporarily ground air tankers for safety reasons after a hobbyist's drone flew over the fire, but flights resumed Thursday.

The fire was just 20 percent contained.

A wildfire has grown to more than 26 square miles in inaccessible terrain south of Lake Tahoe and has led to some voluntary evacuations, officials said Thursday.

No buildings have been damaged, but the small mountain town of Markleeville is under a voluntary evacuation warning, according to the Bureau of Land Management. Several campgrounds were evacuated earlier in the week, and two highways have been closed.

About 900 firefighters are battling the blaze ignited by lightning Friday about 20 miles west of the Nevada border and they had the blaze 15 percent contained.

Meanwhile, crews have contained a 533-acre fire about 50 miles east of San Francisco near Antioch that had led some 30 homes to be evacuated Wednesday night, news station KNTV reported. No structures were damaged.