California’s total represented a 16.4% increase over 2018, one of the largest year-to-year gains of any state, and enough to erase what would have otherwise been a national decrease in homelessness.

This week, in an effort to speak with lawmakers and leaders on both sides of the aisle about one of the major crises of our time, The Issue Is headed to USC, where the Schwarzenegger Institute for State and Global Policy hosted "Unhoused: Addressing Homelessness in California.”

Our exploration of the crisis starts with a discussion with the institute’s namesake, Former California Governor Arnold Schwarzenegger.

Schwarzenegger said that when he sees Californians on the streets, freezing in the cold, it breaks his heart. However, the sight also makes him think of “typical politicians.”

“They can’t get their act together,” the former Governor said. “This is not something that’s a pandemic that happens from one day to the next, this is something that has developed over years… they should have been doing stuff as the crisis was developing.” 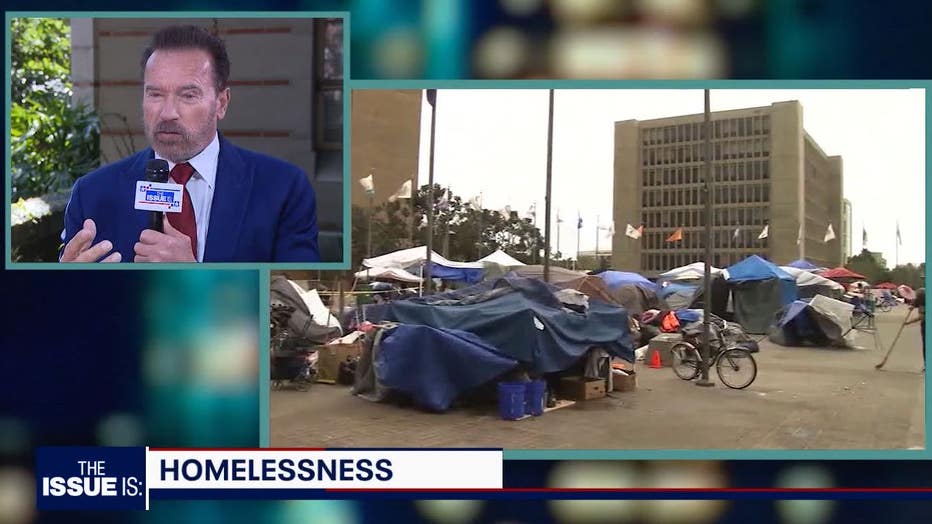 While Schwarzenegger admitted there is friction between local, state and federal governments, he said that in the history of America, the only way to get big things done is to work together.

“Democrat, Republican, young, old, minorities and whites, everybody should come together and talk about this issue,” Schwarzenegger said. “This is no different than being on a soccer team or a basketball team, if everyone on the team plays together, you can win.”

Two public figures who could take Schwarzenegger’s words to heart are CA Governor Gavin Newsom and President Donald Trump. In recent months, the two have sparred over who bears responsibility for the crisis, and whose job it is to clean things up.

Here to discuss the issue with Elex is Secretary of Housing and Urban Development Ben Carson.

When it comes to the federal government’s role, Carson said the White House is playing a part, issuing executive orders to eliminate barriers to affordable housing, as well as speaking with local jurisdictions to encourage removal of those regulations that make affordability difficult.

But what about issuing additional housing vouchers, as Governor Newsom has requested?

“There are two approaches,” Carson said. “One approach is you can keep chasing the escalating prices with more and more money – you’ll never get there. The other is to look at the cost for the escalating prices to deal with that. We want to look at the cost and deal with that and then if after we do that you need more money, then absolutely, but to do it the other way around is never going to lead you to the right place.”

When pressed by Elex if HUD would not be issuing more vouchers in the foreseeable future, Carson responded by saying “Well, let’s use the ones that we have and let’s use them efficiently. But let’s bring the prices into alignment with common sense so that we can make those vouchers actually valuable again.”

As the attendees at the “Unhoused” symposium looked for solutions to the state’s growing crisis, San Diego Mayor Kevin Faulconer was there for a different reason, to highlight what strategies have actually worked for him, as he has led San Diego towards becoming the only major county in California to see homelessness fall.

“We’re taking decisive action,” Faulconer said. “We have one goal, get people off the streets and get them transitioned into a house or apartment of their own… I do not allow tents on San Diego sidewalks, that’s unsafe, unclean and unsanitary, it’s not helping the individuals who are out there.”

Faulconer pointed to a number of San Diego policies, from bridge shelters to neighborhood policing that have allowed the city to clean up the streets and provide the needed services to unhoused individuals, whether they want to utilize them or not.

“To condone somebody to living on the street, oftentimes, is to condone them to die on the street,” Faulconer said. “I think we have to move towards a system that says, if we are going to provide the shelter beds, you have to use them – I thinks that’s common sense.”

Our exploration of the homeless crisis concludes with a panel on short-term solutions to the problem.

In the wide-ranging discussion, the panelists touched on mandated state benchmarks, dealing with mental health, NIMBY-ISM, aka “Not in My Backyard,” CA’s Proposition 47, and the intersection of the homelessness, climate change and CA’s bloated prison population.

"The Issue Is: with Elex Michaelson" is California's only statewide political show. For airtimes and more information, go to TheIssueIsShow.com