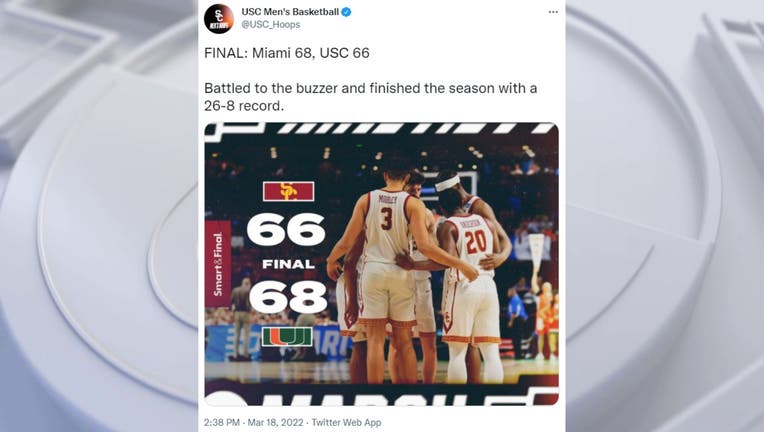 GREENVILLE, S.C. (AP) - Charlie Moore made two free throws with three seconds left and finished with 16 points to lift 10th-seeded Miami to a 68-66 win over No. 7 seed Southern California in the first round of the NCAA Tournament on Friday.

Moore drove the lane in the final moments and appeared to have his layup blocked by Chavez Goodwin. But a foul was called and Moore made the free throws.

USC’s Drew Peterson put up a shot from halfcourt that banked off the backboard and front of the rim as time ran out, sealing the Hurricanes’ first win in the tournament in six years.

Miami (24-10) will play Auburn on Sunday in a Midwest Region second-round game.

Isaiah Wong led Miami with 22 points before fouling out with 2:07 to play with his team ahead 59-58. The Hurricanes stretched the lead to 65-58 with 44 seconds left, but Peterson, who led the Trojans with 17 points, hit consecutive 3s and Peterson’s inside basket tied it.

Miami won its first NCAA game since defeating Wichita State in the second round in 2016.

Wong scored the next five points to regain the lead and set up a tight, back-and-forth battle to the final seconds.

There were eight lead changes over the final 11 minutes.

Miami: The Hurricanes leaned heavily on Wong the first 37 minutes, then got contributions from Moore and Kameron McGusty to advance. They’ll need everyone from the start if they hope to keep playing after Auburn showed its power and versatility in an 80-61 first-round victory over Jacksonville State.

Southern California: The Trojans’ slow start put them in an early hole, and it didn’t help that they had trouble taking care of the ball with 18 turnovers, 12 off steals. USC made just 8 of 27 shots the first 20 minutes as Miami moved out to a double-digit lead.