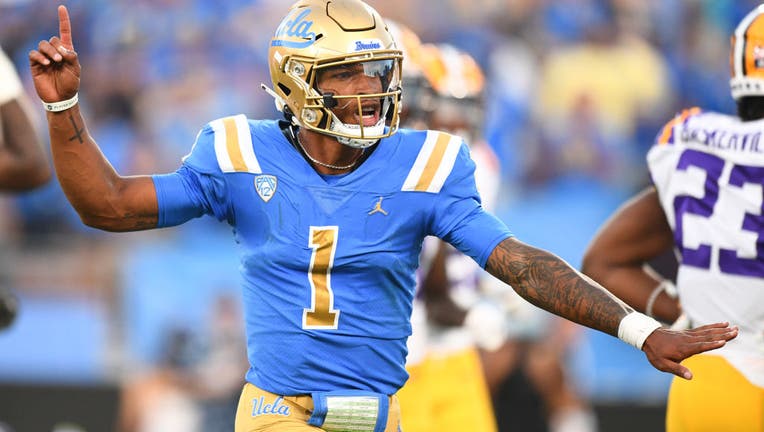 PASADENA, CA - SEPTEMBER 04: UCLA Bruins quarterback Dorian Thompson-Robinson (1) celebrates during a college football game between the LSU Tigers and the UCLA Bruins played on September 4, 2021 at the Rose Bowl in Pasadena, CA. (Photo by Brian Rothm

Thompson-Robinson completed 9 of 16 passes and had an interception. Tight end Greg Dulich had 117 yards receiving, including a 75-yard touchdown catch early in the second quarter to tie it at 7.

Charbonnet’s 12-yard run off right end with 9:49 remaining in the second quarter gave UCLA a 14-7 lead that it would not relinquish.

UCLA held LSU to 48 yards rushing and forced a key turnover in the third quarter when Caleb Johnson intercepted Max Johnson’s pass and returned it 34 yards to the LSU 17. Three plays later, Thompson-Robinson connected with Chase Cota for a 14-yard TD to extend the Bruins’ lead to 21-10.

Despite dealing with a deadly hurricane in Louisiana, several LSU fans showed up to watch the Tigers take on the Bruins at the Rose Bowl in Pasadena.

Thompson-Robinson’s 45-yard TD toss to Kyle Phillips extended the lead to 38-20 midway through the fourth quarter.

Brittain Brown added 78 yards on 14 carries, including a fourth-quarter touchdown.

Johnson was 26 of 46 for 330 with three touchdowns and an interception. Kayshon Boutte finished with nine receptions for 148 yards, including all three scores.

It is the second straight year LSU has lost its opener. The Tigers had to leave campus last weekend due to Hurricane Ida and spent most of the week practicing in Houston.