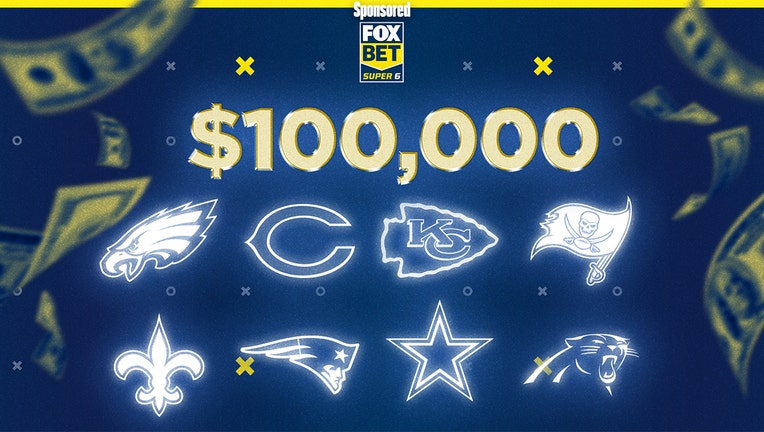 Can you believe we're already to Week 4 of the 2021 NFL regular season?

It's the magical time in the football calendar where overreactions are still running wild, yet the real students of the game can start to drill down and find trends that will matter the rest of the calendar year and into the postseason.

Still, you have to be wary about putting too much faith into your reads. The key is being willing to adjust and adapt as you get new information.

That's the kind of attitude you'll need to take home $100,000 of Terry Bradshaw's money in the Week 4 NFL FOX Bet Super 6 contest! All you have to do is download the FOX Bet Super 6 app (if you haven't already), enter the NFL Sunday challenge, and make your picks on which team will win and by how many points in six games from the Week 4 Sunday slate.

To help you get to the pay window, here are my thoughts and picks for each Super 6 game, with all NFL odds via FOX Bet.

The Bears, on the other hand, are rotten to the core offensively, and now have to deal with a swollen hand to rookie QB Justin Fields. Chicago may not name a starting QB until later in the week, with Nick Foles possibly being in the mix. Whoever it is, he'll have to try and trust an OL that surrendered nine sacks to the Browns.

Chicago had 47 yards on 42 plays, good for a 1.1 yards-per-play. The Bears' defense, featuring the trio of Robert Quinn, Khalil Mack, and Roquan Smith, won't let the Lions put up many points, so expect a low-scoring, boring game.

The look-ahead line here was Bears -6, but it was adjusted down to -3 after the inept showing in Cleveland.

The Cowboys' nettlesome defense, which didn't force a punt against Justin Herbert and the Chargers, and was toothless against Tom Brady, looked impressive bottling up Jalen Hurts and the Eagles. Philadelphia didn't score an offensive point in the first half and was limited to just three first downs. Now Dallas gets to face Sam Darnold, who will be without his security blanket in Christian McCaffrey.

Carolina comes in with extra time to prepare, having beaten Houston last Thursday. This will be a significant step up in class for the Panthers, who have faced rookie QB Zach Wilson, below-average quarterback Jameis Winston, and rookie signal-caller Davis Mills.

The Cowboys are the side here, but can their defense duplicate the MNF performance, which came against a hated rival? Probably not.

PICK: Cowboys to win by 4-7 points

This bet is a hold-your-nose special. Who in their right mind is going to take the Giants here? The owner got booed at halftime last week, they collapsed late against the winless Falcons, let a backup QB beat them in Washington, and oh yeah, the Saints are playing their first game at home.

Call me crazy, but give me the Giants here showing up on the road. For some reason, QB Daniel Jones is covering machine on the road (10-4 ATS). Yes, New York's receivers are banged up, and the coach and GM are on the hot seat, but give me a desperate, cornered animal.

This Saints team is overrated and starts a QB who hasn't thrown for 150 yards in a game yet this season. New Orleans is 2-0 as underdogs; 0-1 as a favorite. The spread is a large number for Jameis Winston to cover, coming off an impressive road win.

The public is down on the 1-2 Chiefs, even though you could credibly argue they are two plays away from being 3-0. If Clyde Edwards-Helaire doesn't fumble vs. Baltimore, and the Chargers don't convert a 4th and 9 late in the game, we would see a much higher line for this game.

The Chiefs are set up to pound a very overrated Eagles team that has struggled offensively in the first half this season. Philadelphia has two touchdowns, a field goal, and six punts in 13 drives. The Eagles' yards-per-play stats (6.5, sixth in the NFL) are heavily skewed by the Falcons result, a 91-yard pass in the 49ers game, and garbage-time numbers vs. Dallas.

It feels like the excitement is gone from Philadelphia's season-opening 32-6 win over Atlanta. The Eagles were without two offensive linemen vs. the Cowboys and then lost another to a foot injury.

On the other side of the ball, Philadelphia's defense gave up eight catches (on nine targets) for 94 yards and two touchdowns to Dallas. Look for the Kansas City offense to explode in this game. Travis Kelce is in line for a monster game.

After making the playoffs behind a stingy defense last year, Washington is 0-3 ATS, with its defense hemorrhaging yards (1,296, 31st in the NFL) and points (30.7, 4th). Last year, the Chase Young-led unit was 2nd and 4th in those two categories.

Maybe this is a get-right spot for Washington, against a fading QB in Matt Ryan, who has a career-worst 6.0 ypa through three games, and grades out as the 29th rated QB this season per PFF, behind Mac Jones and Carson Wentz.

The Football Team is desperate for a win to salvage the season, with the Saints, Chiefs, Packers, undefeated Broncos, and then Buccaneers looming. A loss here, and Washington can forget about the playoffs.

The problem is, I'm not sure Atlanta should be favored over anyone. This game feels like a coin toss.

PICK: Washington to win by 1-3 points

The Patriots' only path to success so far has been a short passing game from Mac Jones and a heavy ground game backed by their stingy defense. That game script worked against rookie QB Zach Wilson (4 INTs) but failed against mediocre offense teams in Miami and New Orleans. Now comes one of the football's most lethal offenses, led by a 44-year old QB who would love to return home to New England and drop a 50-burger on the coach who (kind of?) drove him out of town after six Super Bowl rings.

Bill Belichick knows Tom Brady better than any coach in the league, so he should be able to cook up some exotic defenses to keep this close for a half. Tampa is again struggling to run the ball, as Brady led them in rushing yards in the loss to the Rams, so that will be something to keep an eye on.

The anemic Patriots offense (4.8 yards per play through three games, 27th in the NFL) will have a decision to make when the Bucs go up by double digits: Unleash Jones and let him throw downfield against a secondary that is a tad overrated right now due to injuries, or stick with the ball control attack? Is the rookie ready for that?

PICK: Buccaneers to win by 8-12 points

Play FOX Bet Super 6 every week for your chance to win thousands of dollars, including $10,000 on the Big Noon Kickoff game of the week, a weekly $25,000 contest across college football, and, of course, the Sunday NFL Challenge. Just download the FOX Bet Super 6 app and make your picks today!