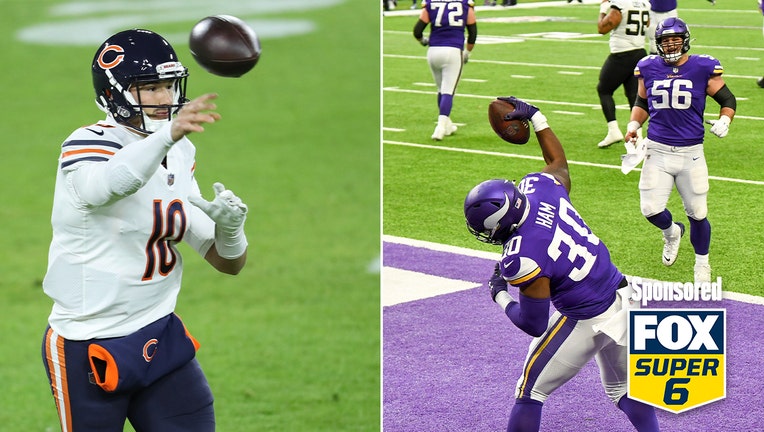 NFL playoff spots hang on the line. Division titles are up for grabs. And there are opportunities for you to take away cash on Week 15 of the NFL season with FOXBet’s Super 6.

This week, you could win the $100,000 jackpot if you match the winners of all six games and the correct margins in the Super 6 contest. (The jackpot will be split among those who get every game and margin of victory correct.)

The best part — it’s free. To play, go to the FOX Super 6 app on your phone or tablet.
When you click on the app, you will see the entry for the NFL Sunday Challenge. Just go onto the app, swipe for the team you think will win and the margin of victory.

Here are the six NFL games to pick for this coming week.

It is a “loser leaves town” type of game for the NFC playoff field for both the Bears and Vikings, who met back on Nov. 16 with Minnesota scoring a 19-13 win at Soldier Field. Bears quarterback Mitchell Trubisky passed for 267 yards and three touchdowns as the Bears broke a six-game losing streak with a 36-7 thumping of the Texans. If the Bears can win, they could sneak past the Cardinals for the seventh playoff spot.

Meanwhile, the Vikings 26-14 loss at Tampa Bay – fueled by Dan Bailey’s kicking woes – sent them back into the outside of the playoff race behind Arizona. Minnesota’s remaining schedule is more daunting with a road game at New Orleans next week. That’s why this is a must-win.

Who can stay alive in the NFC playoff race? Make your pick on the FOX Super 6 for free and it could lead to $100,000.

The Derrick Henry for MVP campaign gained more steam on Sunday as the Titans running back rushed for 215 yards and two touchdowns in a 31-10 win over the Jaguars. Tennessee still remains atop the AFC South thanks to a divisional win percentage over the Colts, who are tied with them.
Meanwhile, the Lions are – well, the Lions. Lions quarterback Matthew Stafford suffered a rib injury in the fourth quarter of a 31-24 loss to Green Bay that saw Detroit’s playoff hopes gate under interim head coach Darrell Bevell, the Lions showed more fight. But then again, that’s not enough to make up for a talent gap Detroit is facing.

The numbers that mattered show the Bucs improve to 8-5 with Sunday’s win over the Vikings. However, some of the underlying numbers were troubling again. Minnesota had an almost 2-to-1 advantage in time of possession and allowed the Vikings to have an edge in first downs and total yardage. Still, the Bucs control their destiny for one of three wild-card spots and can start to clamp it down with a win in Atlanta, who lost to the Chargers in Los Angeles on a late field goal and who have lost back to back games after a strong stretch under interim head coach Raheem Morris.  This is the first of two games in three weeks between the two teams.

With FOX Super 6, you can bet and take a shot at great prizes. If you win all six games, you can win $100,000. Download the app at the App Store or Google Play.

Raise your hands if you thought the division leader in this matchup would be the football team. Ok, now you are lying. Washington has won four in a row and surged into the lead in the NFL’s wackiest division. Sunday’s 23-15 win over the 49ers even brought the return of Dwayne Haskins at quarterback in replacing Alex Smith, who suffered a calf injury. But the real story was Washington’s defense, which recorded two touchdowns off 49ers quarterback Nick Mullins to give the deciding margin.

The Seahawks, meanwhile, were able to bounce back from a stunning loss to the Giants by pounding New York’s other team, the Jets, 40-3. Russell Wilson had four touchdown passes as Seattle stayed on the heels of the Rams for the NFC West lead.

New England’s last stand for a playoff spot. Both teams are coming off losses to potential Super Bowl contenders- New England’s offense stifled in a 24-3 loss to the Rams, the Dolphins falling just short in a 33-27 home loss to Kansas City. For the Patriots, the offense needs to get going and Cam Newton has to be better than he was during Thursday’s night’s loss to Los Angeles that saw him yanked for Jarrett Stidham in the fourth quarter.

Meanwhile, the Dolphins may have to play this one without Myles Gaskins, who was placed on the COVID-19 list.

This is a critical game for two teams hanging onto playoff hopes. Cleveland is looking to keep its lock on an AFC wild-card spot and get back on track after a tough 47-42 loss to the Ravens on Monday night. The Browns are also playing their way into the discussion as a serious AFC contender in that “team you don’t want to play” mode.

Meanwhile, the Giants had a serious stumble in a 26-7 loss to the Cardinals that raised more concerns about Giants quarterback Daniel Jones’ ability to finish the season with a hamstring injury that appeared to hinder him.

With FOX Super 6, you can pick the winner and take a shot at potentially $100,000 in prizes while playing for free. Download the Super 6 app on App Store or Google Play.

No purchase necessary. Open to legal residents of the US, excluding WA. 18 and older. See terms and conditions at foxsuper6.com. Sweepstakes and Prize Sponsored by TSG Interactive US Services Limited.