It was unclear what upset Howard, but Wisconsin was up 15 when it took a timeout with 15 seconds left.

After the game, Howard pointed a finger at Gard. Later on, Howard appeared to take a swing toward Wisconsin assistant Joe Krabbenhoft, and players from each side got involved in the skirmish.

Video of the punch was caught on CBS cameras and was quickly posted on social media.

Wisconsin outscored Michigan 44-25 over the last 18 1/2 minutes. Steven Crowl’s 3-pointer with 16:06 remaining put the Badgers ahead for good and highlighted a 14-1 spurt.

Davis took over from there. 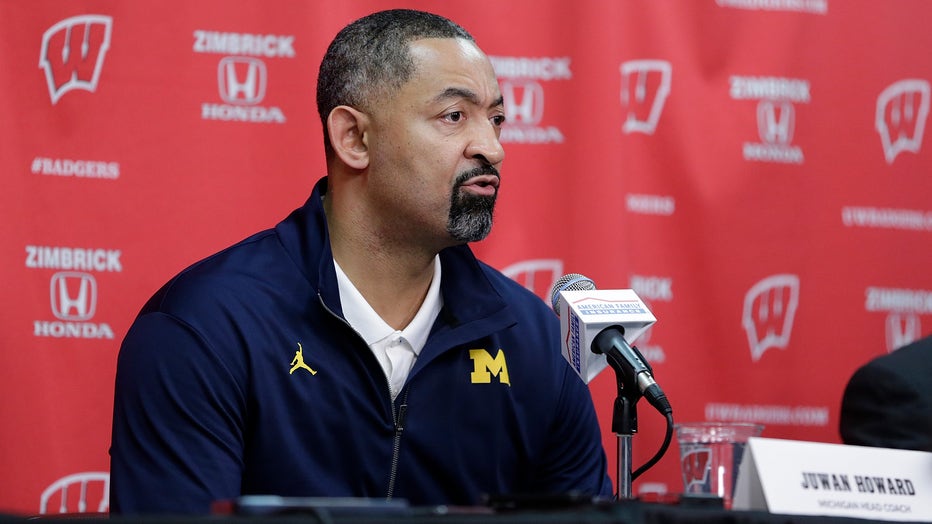 MADISON, WISCONSIN - FEBRUARY 20: Michigan Wolverine Head Coach Juwan Howard speaks to the media about the fight after the game against the Wisconsin Badgers at Kohl Center on February 20, 2022 in Madison, Wisconsin. (Photo by John Fisher/Getty Image

The national player of the year candidate went on a personal 9-0 run and blocked a shot in a span of 2 minutes, 12 seconds to give the Badgers a 56-41 lead. That stretch included a spectacular drive into the lane in which Davis scored with his left hand and drew contact to set up a three-point play.

Michigan (14-11, 8-7) scored five straight points to get the margin down to 10, but Davis answered with a jumper and teammate Brad Davison followed with a 3-pointer.

Hunter Dickinson scored 21 points for Michigan, which shot just 4 of 25 from 3-point range. Eli Brook had 14 and DeVante’ Jones added 11.

Wisconsin raised former Badgers star Michael Finley’s No. 24 jersey to the rafters during a halftime ceremony. Wisconsin’s pep band wore white No. 24 T-shirts throughout the game.

Finley joins Ab Nicholas (No. 8) and Frank Kaminsky (No. 44) as the only Wisconsin players to have their jerseys in the rafters. Those three numbers are still able to be worn by current and future Badgers.

"It wasn’t something that I came to the university as a goal," Finley said before the game. "My main focus was to win as many basketball games as I could, put the Wisconsin basketball program on the map, and whatever happened after that, happened."

Michigan: The Wolverines squandered an opportunity to boost their NCAA Tournament credentials and heard the Wisconsin crowd chanting "NIT" in the final seconds. But the bigger issue for now is the immediate future of Howard and what discipline he could be facing.

Wisconsin: Davis is the guy who could carry the Badgers on a deep postseason run, but the performances of Crowl and Hepburn also offer cause for encouragement. Davis, Davison and Wahl were scoring 65.2% of Wisconsin’s points heading into Sunday, including 67.2% in Big Ten competition. The Badgers will need someone else to provide some offense as well.

By following up a victory at Indiana with this home triumph over Michigan, Wisconsin should move up a few spots Monday as it tries to get back into the top 10.

Wisconsin: At Minnesota on Wednesday.