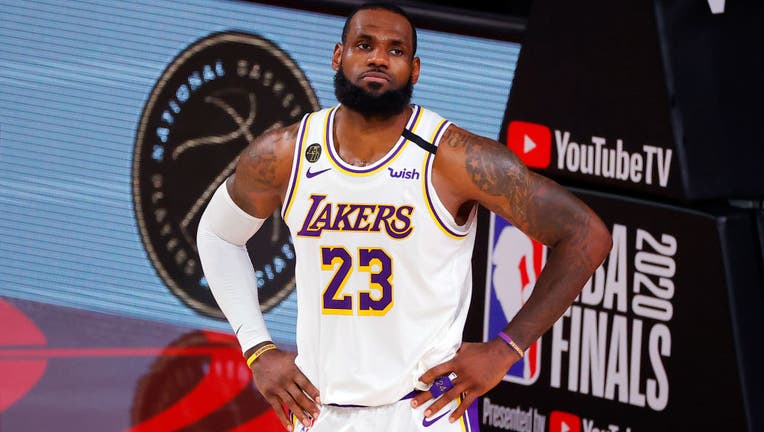 LAKE BUENA VISTA, FLORIDA - OCTOBER 04: LeBron James #23 of the Los Angeles Lakers reacts during the second half against the Miami Heat in Game Three of the 2020 NBA Finals at AdventHealth Arena at ESPN Wide World Of Sports Complex on October 04, 202

LeBron James powered into the lane, looking to take another step toward an NBA title.

Instead, he took too many steps.

James was whistled for traveling, ending a possession that could have given the Los Angeles Lakers a fourth-quarter lead.

A couple of minutes later, he did it again.

In the time of the game when he usually turns it up, James turned it over Sunday night, part of a sloppy performance by the Lakers in a 115-104 loss to the Miami Heat in Game 3 of the NBA Finals.

"It wasn't about effort, it was just about execution," Lakers coach Frank Vogel said.

Knocked off track early by Anthony Davis' first-quarter foul trouble, the Lakers wasted a chance to take a 3-0 lead, which has never been blown in NBA playoff history.

They never got control of Jimmy Butler or of the basketball in Game 3. Los Angeles committed 20 turnovers that led to 21 Miami points, with James committing a game-high eight of them.

Davis took only nine shots and finished with 15 points, less than half of his performances in the first two games when he scored 34 and 32.

"You have to be able to adapt and adjust," Vogel said of Davis' foul trouble. "It probably had a small factor on our offensive rhythm but we've just got to be better overall on both ends."

James had 25 points, 10 rebounds and eight assists, but the NBA assist leader's turnovers contributed to the Lakers never having sustained momentum.

"You just can't turn the ball over against that team," James said, "and I take full responsibility for that."

They fell behind by 13 points in the first quarter, even with James cutting short his usual early rest because Davis had to go to the bench with a couple of quick fouls.

The Lakers stayed behind until early in the fourth quarter. But Miami went back ahead for good right after James' first travel and Butler wouldn't Los Angeles come back again, finishing with 40 points, 13 assists and 11 rebounds.

James and Davis had been putting up numbers like Shaquille O'Neal and Kobe Bryant through the first two games of the series. With Miami short-handed, the only intrigue seemed to be which of the two Lakers superstars would win the NBA Finals MVP award.

Now there's much more intrigue than that.   But the Lakers never lost again after their defeats in each of the three previous rounds, finishing each series in five games. They can still do that now.

"I don't feel like we're concerned," James said. "We know we can play a lot better. We have another opportunity to take a commanding lead on Tuesday" in Game 4.

"Eyes ahead to Tuesday."