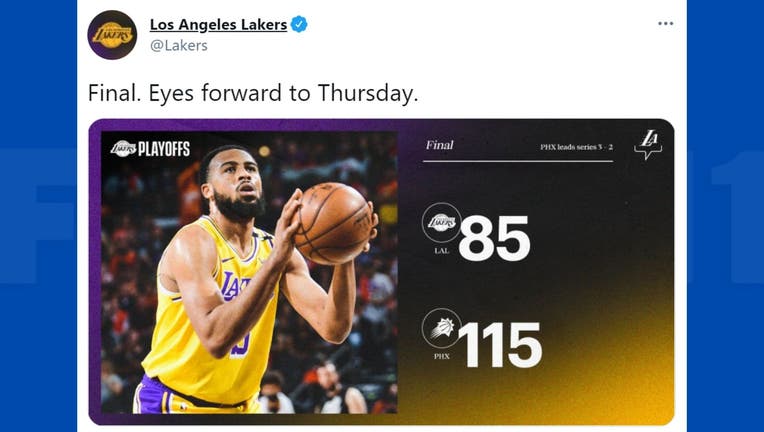 PHOENIX, Ariz. (KTTV) - The Los Angeles Lakers were scorched by the Phoenix Suns in a 115-85 blowout loss Tuesday night.

The Lake Show was without star Anthony Davis in Tuesday's blowout loss, who was scratched from the lineup due to a groin injury.

Los Angeles was torched early in the loss, entering the locker room trailing 66-36 at the half. The first-half deficit was the largest in LeBron James' playoff career.

The Lakers are hoping to keep their season alive Thursday night when they host the Suns at Staples Center for Game 6.

The Lakers locked in the Western Conference seventh seed after beating the Golden State Warriors 103-100 in the play-in tournament. The reigning NBA champs finished the COVID-shortened regular season with a 42-30 record.

The Suns secured the second seed after finishing the season with a 51-21 record. Phoenix's ended the franchise's 11-year playoff drought after clinching the playoffs earlier this spring.