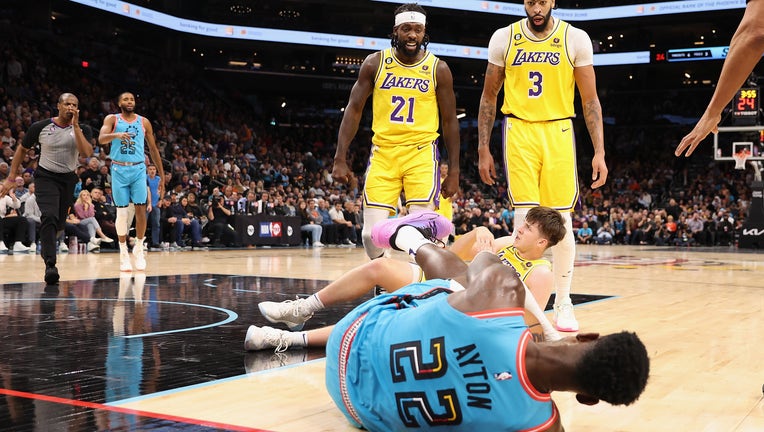 The NBA gave Patrick Beverley a three-game suspension Thursday, two days after the Los Angeles Lakers guard was ejected for shoving Phoenix’s Deandre Ayton from behind.

It’s the second time Beverley has been suspended for shoving someone from behind; the other came in the last game of the Los Angeles Clippers’ 2021 playoff run, when he struck Suns guard Chris Paul from the back and had to sit out the first game of the 2021-22 season.

"The suspension was based in part on Beverley’s history of unsportsmanlike acts," the NBA said in announcing the sanction.

"Tough foul, hard foul, Austin gets knocked down, there’s a little bit of chirping going on with Book and Ayton and some of our guys, and then from what I saw Ayton was just standing there about to walk over him," Lakers coach Darvin Ham said Tuesday. "And then Pat Bev ... you don’t want this to be a tough-man competition. You actually want to play tough basketball. But at the end of the day, I’m not mad at him. He’s there protecting his teammate."

The Lakers, who are off to a 5-11 start, will be without Beverley for games at San Antonio on Friday and Saturday, as well as a home game against Indiana on Monday.

Beverley will be eligible to return Wednesday against Portland. He is averaging a career-low 4.1 points this season on just 27% shooting.