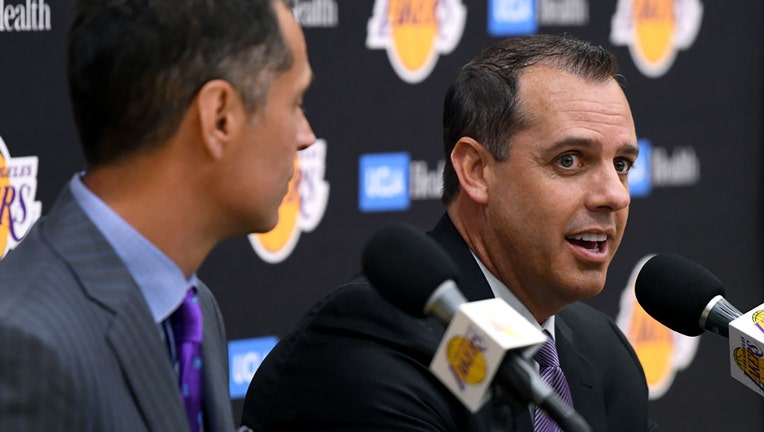 EL SEGUNDO, Calif. (FOX 11) - Former Indiana Pacers and Orlando Heat coach Frank Vogel was introduced on Monday as the Los Angeles Lakers' fifth permanent coach since the retirement of Phil Jackson in 2011. But his introduction was overshadowed by comments made on ESPN by Magic Johnson, who accused Laker General Manager Rob Pelinka of back-stabbing by deriding his work as team president of basketball operations, a position Johnson abruptly quit last month.

Johnson also said the team had been taking away his decision-making ability, most notably by preventing him from firing then-head coach Luke Walton.

Two days after Johnson quit the team, Walton and the Lakers announced April 12 that they had "mutually agreed to part ways," leading to the ultimate hiring of Vogel.

"I think all of us in life probably have been through things where maybe there's third-party whispers or he-said-she-said things that aren't true," Pelinka said. "... These things are surprising to hear and disheartening. But I look forward to the opportunity to talk with him and sit down with him and work through them just like in any relationship, because they're just simply not true."

The Lakers had a 37-45 record this season, missing the NBA playoffs for the sixth consecutive season, despite signing perennial all-star forward LeBron James in the offseason. They had missed the playoffs five times in their 65 seasons preceding the current streak.

Vogel had a 304-291 record in six seasons with the Indiana Pacers and Orlando Magic. He guided the Pacers to five playoff appearances and back-to- back trips to the Eastern Conference Finals in 2013 and 2014.

Vogel, a Laker advance scout in the 2005-06 season, said players can't be distracted by outside forces.

"The focus for our group has got to be to remain in the moment," Vogel said.

"There's going to be a lot of talk about getting our team back into the playoffs, and what the Lakers represent in terms of a tradition of competing for championships. Those are end-result things. We are going to be focused on the work."