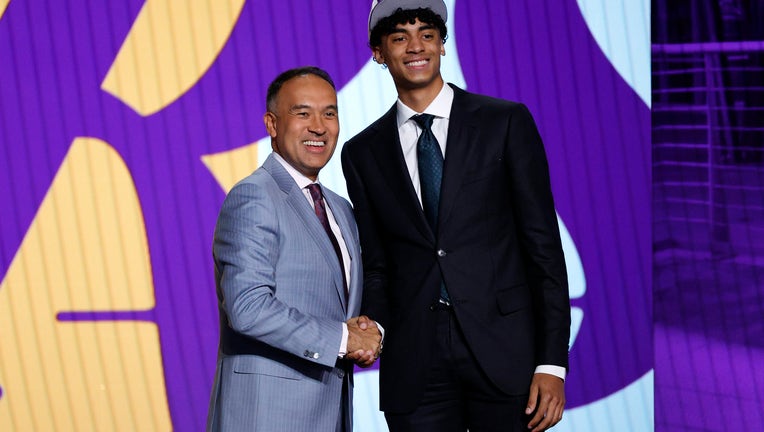 NEW YORK, NEW YORK - JUNE 23: Deputy commissioner Mark Tatum and Max Christie pose for photos after Christie was drafted 35th overall by the Los Angeles Lakers during the 2022 NBA Draft at Barclays Center on June 23, 2022 in New York City. NOTE TO US

The Lakers didn’t have any picks until Thursday morning, when they acquired a high second-round selection from Orlando in a trade for cash considerations and a second-round pick in 2028. Los Angeles traded away both of its own 2022 selections back in 2019 while acquiring Anthony Davis.

The 6-foot-6 Christie averaged 9.3 points and 3.5 assists last year with the Spartans. Although he hit just 31.7% of his 3-point attempts, his smooth shot and improving wing defense attracted attention as he elected to head to the NBA after just one collegiate season.

Christie is a Chicago-area native, as are Davis and Lakers swingman Talen Horton-Tucker.

The Lakers have a solid history of finding NBA-caliber talent outside the upper reaches of the past six drafts, and their scouting department identified Christie as a depth addition who could contribute more in the future to a team perpetually in win-now mode with Davis and LeBron James.

While most NBA scouts were undecided whether Christie can contribute to an NBA team immediately, the Lakers need low-cost supporting personnel. Most of their payroll likely will be going to James, Davis and Russell Westbrook, who is expected to exercise his $47 million player option to return.

New Los Angeles coach Darvin Ham said he is eager to coach Westbrook, whose ineffective play last year in his Lakers debut was a primary reason the franchise finished 33-49 and missed the play-in tournament. Injuries also doomed the Lakers, who had James, Davis and Westbrook in their lineup together for only 21 games.