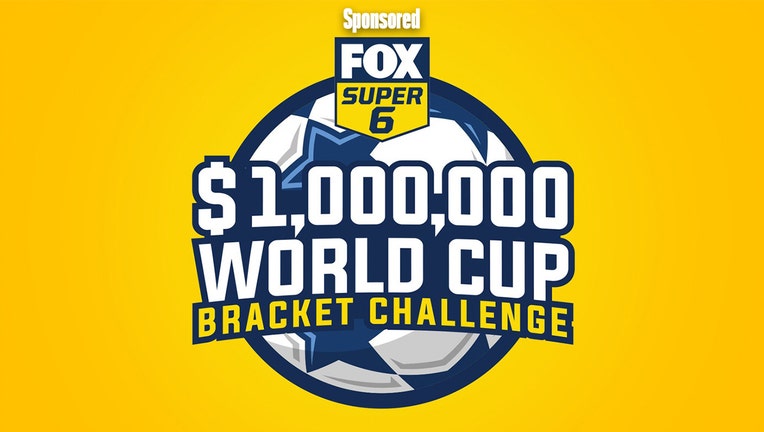 $1 million dollars is up for grabs in the FOX Super 6 World Cup Bracket Challenge. Jason McIntyre gives you simple tips on how to win this seven-figure cash prize. (FOX Sports)

Every four years, the globe unites for the biggest sporting event — the World Cup on FOX.

Whether it's backing a favorite like Brazil or rooting on the United States, fans and bettors across the land will all find excitement in watching how the competition unfolds. Play begins in Qatar on Nov. 20.

Do you know what else can make the World Cup more exciting? Free money!

This is where the FOX Super 6 $1 Million Dollar World Cup Bracket Challenge comes in! It's a free-to-play contest where you pick the winner and runner-up for each of the eight groups and then predict the knockout bracket winners all the way through the FIFA World Cup Final.

So, how can you try your luck at winning this seven-figure jackpot?

That's what I'm here for. Even if you know nothing about the World Cup, I have you covered with my 10 easy tips to win.

Let's dive into what you need to win. And after you read my secret formula, just go here and start making your picks. It really is that simple.

1. Keep it simple in the Group stage: Favorites, duh.

3. The end for Cristiano Ronaldo?

It’ll be easy for many filling out a bracket to see Portugal, knowing that it features one of the best players in the history of the sport —  Cristiano Ronaldo — and push them through. But Ronaldo has been struggling in club play with Manchester United, and Portugal has perhaps the most challenging group with Ghana, Uruguay and South Korea. The longest shot in the group (Ghana +1200) is the smallest underdog of any in the group stage.

4. If you want upsets, save them for the knockout rounds.

Who can forget in 2018 when Russia pulled off one of the biggest upsets in the history of the knockout round with a penalty kick win over Spain? Russia was the host country, which fueled that stunning result.

5. Can Mexico snap its knockout round struggles?

Mexico has lost in the knockout round in the last seven World Cups. This might be the year to snap the streak — assuming El Tri can get past Poland in group play. Their likely opponent would be France or Denmark. Mexico almost appears underrated heading into the World Cup, but keep an eye on the duo of Hirving Lozano and Edson Alvarez pulling an upset or two for El Tri.

After missing the 2018 World Cup, the Stars and Stripes are desperate for a good showing before hosting the event in 2026. They’re in a group with one of the tournament favorites, England, and they’ve got the youngest team in the entire field. And you’ll know their chances of advancing after the games against Wales because advancing becomes near-impossible if it’s a loss.

7. To win the Cup, you must win the group

The last six World Cup champions have finished first in their group. Even making the final is difficult if you don’t win your group. The last team to do that was France in 2006, and their unbelievable path included wins over Spain (which had won 25 straight games), Brazil (the pre-tournament favorite) and Portugal.

8. Look to Europe for underdogs to make a run.

9. One of the Super Six is very likely to win the title.

Going all the way back to 1970, only six teams have won the Cup: France, Germany, Spain, Italy, Brazil and Argentina. We should see more of the same this year.

The biggest knock against Lionel Messi in all the G.O.A.T. discussions is that he hasn’t won any international titles. But in 2021, he led Argentina to a win over Brazil in the Copa America title game and was directly involved in nine of the 12 goals scored by Argentina. At 35, this will be his last World Cup, and wouldn’t it be a storybook finish to a legendary career if Messi won the World Cup?

Are you ready to win some money? Of course, you are, so get your picks in now to win this cool million-dollar prize.