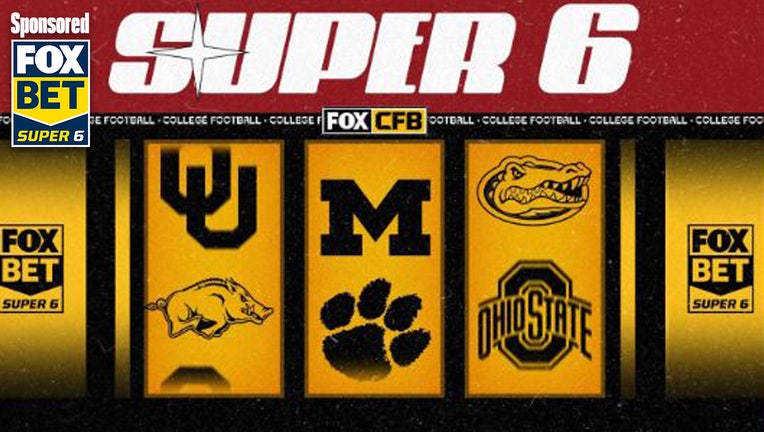 College football Week 4 is here, which means you have another shot at winning $25,000 playing FOX Bet Super 6. Here's how. (FOX Super 6)

Let's just all be honest here. College football season is the most wonderful time of the year.

The chilly fall weather makes you spend your cash on overpriced coffee and oversized sweaters. And that's actually perfect because those are the two things you need when you're braving the elements and watching your favorite college football squad in person.

But for the times we can't make it to the stadium to root for our teams and yell at the refs, FOX Bet Super 6 has you covered!

FOX Bet Super 6 is a free-to-play contest where you pick the winners and margins of victory of six marquee matchups. If you get all six right in the college football contest, you have a shot at winning the $25,000 jackpot.

And since the theme is keeping it 100, pocketing $25,000 is more exciting than sitting on hard stadium seats hoping your team wins.

So before you grab your pumpkin-spiced whatever and cozy up in front of the TV for this weekend's college football slate, read our predictions for these Week 4 matchups. These picks should help guide you as you make your selections for the contest.

Head coach Jim Harbaugh has gotta be happy that he's keeping the naysayers at bay for now. If we're judging Michigan's season so far, Harbaugh & Co. have nothing to worry about.

Michigan has outscored opponents 166-17 this season, including 103-0 in the first half. In fact, the Wolverines are the only Power 5 squad that has not allowed any first-half points. Big Blue also leads the FBS in scoring offense at 55.3 points per game, and they have the fourth-ranked scoring defense.

Michigan is winning games and taking names. But the Wolverines are facing a Maryland team this weekend that, like them, has a perfect 3-0 record. Should the 16-point favorite Wolverines be scared of the Terrapins?

Well, to their credit, the Terps aren't some scrubs. They're one of just three FBS squads averaging 8.14 yards per play. And Maryland is one of five schools averaging 40 or more points per game in the Big Ten.

While we're giving Maryland its due for getting to Week 4 undefeated, the buck stops at the Big House for the Terps.

Prediction:
Michigan by 14 to 17 points

This game features another showdown between two undefeated teams. This is the stuff college football dreams are made of.

Also, the Tigers' nine-game winning streak is the longest in the country. What's one more win for the 7-point favorites? Might as well keep adding to the count if you're Clemson.

With all that in mind, is there any reason for Wake Forest to even show up on Saturday?

Well, the Demon Deacons have a pretty impressive September record, too. Since 2016, they're 20-5 during the month. But we saw the real Wake Forest last week when they barely beat Liberty 37-36.

Sure, the Deacs are undefeated, but how much stock can a fan or bettor put in Wake Forest's worth when the squad defeated Liberty by just one point?

It's the Tigers for us.

Prediction:
Clemson by 7 to 9 points

Neyland Stadium is one of the toughest places to play in college football. Saturday at Neyland for a good game? That place is packed with 101,000 people, easily. And it's loud. And intimidating. So mark that down as the Gators' first big disadvantage as they head to Tennessee to take on the Vols.

Also, is Florida a legitimate Top 25 team? The team has already dropped one game to Kentucky and almost lost to USF last week. In the Gator's defense, though, they've had a grueling schedule already, and it's only Week 4. Florida is one of two teams in the nation to face three opponents ranked in the AP Top 25 in the first four weeks of the season.

When it comes to Florida-Tennessee, the Gators have owned this series lately. Florida has won 16 of the last 17 meetings, including each of the last four by at least 12 points. The last time Rocky Top won was in 2016 — 38-28 at Neyland.

With coach Josh Heupel at the helm, the Vols have demolished opponents in the first quarters of games. Under Heupel, Tennessee outscores teams 228-61 in the first quarter. And that includes 190-51 in 2021 and 38-10 this season. We expect to see more of that this weekend.

At FOX Bet, the Vols are favored by 10.5, but we think this SEC East clash will be a close one.

Prediction:
Tennessee by 4 to 6 points

Another SEC battle but this time on the west side — some would argue the best side — of the conference.

Here's something special to note about the Razorbacks. They lead the country in sacks this season with 17. Arkansas has also picked off 28 passes since the start of the 2020 season. That's good for a second-place tie in the SEC.

Let's give the Aggies their flowers, too. They are one of just three SEC teams to score every time they have touched the red zone this season. That's no easy feat. Red zone scoring is tough.

On the downside, A&M averages just 52.3 offensive plays per game. That's the fewest plays per game of any FBS team. As a matter of fact, Texas A&M is the only FBS team that averages fewer than 55 plays per matchup.

Since they already have one loss to Appalachian State, any College Football Playoff hopes would be effectively over if the Aggies drop another game.

Texas A&M will leave it all on the field Saturday night, but underdog Arkansas will just be too tough.

Prediction:
Arkansas by 4 to 6 points

The last time these two faced off was in the 2019 Big Ten championship game, when Ohio State won 34-21.

Do you sense a theme here?

This game for us is Buckeyes or bust. They're No. 3 in the country for a reason. And while they might face some challenging teams en route back to the College Football Playoff, Wisconsin won't be one of them.

Since 2017, Ryan Day-coached quarterbacks have thrown for 300 or more yards 40 times. This ties Alabama’s record for the most in that span. Last week, the Buckeyes put up 77 points and 763 total yards of offense on Toledo. Remember, we told you they would put up a basketball score. And they'll do it again this weekend against the Badgers.

Here's a fun fact: In eight of the last 11 meetings, the road team in the OU-Kansas State series has won. If you're Boomer Sooner, then maybe that's not so fun. It is interesting, though.

All that's great for State, but Oklahoma is favored by 12.5 for a reason.

The Sooners' defense leads the nation with 32 tackles for loss, ranking 14th nationally, allowing an average of 10 points per game. They've scored on 11 of their 12 trips to the red zone, and Oklahoma is one of 16 teams to have not thrown an interception this year.

The Sooners have put up at least 33 points per game this year, including 49 big ones over Nebraska last week.

In this new-look year since Lincoln Riley and Caleb Williams dashed for USC, OU hasn't yet skipped a beat.

Prediction:
Oklahoma by 14 to 17 points

Open your FOX Bet Super 6 app and make your selections before Saturday's games kick off. Remember to tag us across all social media @FOXSuper6 and @EricaReneeD and show us your picks using #EricaSuper6.