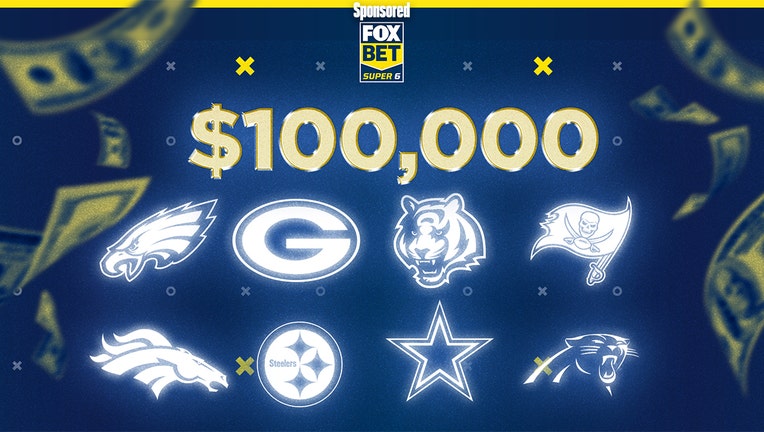 We're into the fifth week of the 2021 NFL regular season, and things are starting to come into focus.

Sure, you still have your outliers like a 3-1 Bengals team (is Cincy for real?), the Cardinals being the only remaining undefeated team in the league (who saw that coming?) and the Chiefs being at the bottom of the AFC West.

But teams that we expected to be good-to-great like the Bills, Cowboys, Chargers and Buccaneers are off to hot starts, while the Lions, three-quarters of the AFC East and a few other squads are already turning their focus to next year's draft.

Add it all up, and you have the makings of a fantastic Week 5 – and you have a chance to win big yourself with FOX Bet Super 6! We're once again giving away $100,000 of Terry Bradshaw's money after one grand-prize winner took home last week's $100,000 jackpot. Perhaps more importantly, after Sunday's win, FOX Bet has now given away over $5 million in total to fans just like you!

All you have to do is download the FOX Bet Super 6 app (if you haven't already), enter the NFL Sunday Challenge and make your predictions on which team will win and by how many points in six of Sunday's games.

Let's get to the picks (with all odds via FOX Bet)!

The Bengals are 3-1, but consider the victories: A fortunate, overtime win over the Vikings on a disputed fumble, a win over a depleted, reeling Steelers team and a second-half rally to defeat the winless Jaguars.

The Packers are by far the best team they will have faced, and it’s unclear what the Bengals will be able to do against Davante Adams. Is Chidobe Awuzie able to return from injury? Trae Waynes played his first game since 2019 last week. Eli Apple is the 104th (out of 108) graded CB in the NFL per PFF.

On the other hand, the Bengals will be able to keep up through the air, especially if Green Bay’s best defender, Jaire Alexander, is unable to go (shoulder; it could be serious). And the Bengals do have extra time to prepare coming off the TNF win, but running back Joe Mixon is nursing an ankle injury.

This feels like a high-scoring game with typical late Aaron Rodgers heroics, like he pulled off in Cincinnati in 2017.

PICK: Packers to win by 3-4 points

This is a gross matchup if Teddy Bridgewater (concussion) is ruled out and Drew Lock has to face an angry Steelers defense that sits in the basement of the AFC North at 1-3. Lock was sacked three times and intercepted once in relief last week against the Ravens. He’s a good deep-ball QB, but with both guards out last week, as well as both deep threat receivers (Jeudy, Hamler), there isn’t much to like about Lock’s chances on the road.

The line feels short, and the total extremely low (and dropping!), but that’s because the Steelers offense looks fitted for the 1980s. Immobile QB, ugly running game, 10-play drives that chew up seven minutes and result in no points. Life is tough for Ben Roethlisberger, who looks lost behind his four new offensive linemen.

Considering the Broncos blitzed Lamar Jackson on 65 percent of his dropbacks last week – an extraordinary high number – Ben’s going to have to unload passes even quicker than normal. The upside for Pittsburgh? Denver is down nine starters from Week 1 – a beat-up team in need of the bye week.

PICK: Steelers to win by 1-2 points

Two teams coming off losses. The biggest edge is clearly the Panthers in the trenches. Sure, they gave up 143 yards to Ezekiel Elliott on the ground last week, but can the Eagles exploit that? Not with four starters on the offensive line out – as they were last week – and not with Miles Sanders getting seven carries for 13 yards.

In fact, the Eagles' leading rusher the last three weeks has been Jalen Hurts. One fun note: Panthers coach Matt Rhule knows Jalen Hurts well. While at Alabama in 2017, Hurts beat Rhule’s Baylor Bears twice, and nearly beat him in the Big 12 championship, limiting Hurts to 38 yards on 23 carries after he torched them for 114 in the regular season matchup.

Meanwhile, the Eagles didn’t force the Chiefs to punt once last week. But after facing two of the top five offenses in the NFL the last two weeks, Philadelphia gets some reprieve going against the Panthers who may or may not have Christian McCaffrey.

One big injury to watch for the Panthers is linebacker Shaq Thompson, who suffered a foot injury versus Dallas, and is a linebacker who would slow down the Philly tight end attack.

PICK: Panthers to win by 7-9 points

The Vikings have three losses by one score, but the one at home last week against Cleveland was painful. They scored an opening-drive TD then did nothing, never returning to the red zone.

Here's the catch: The Browns are the No. 3 defense in the NFL right now, allowing just 20 points in the last 10 quarters. The Lions are the 31st ranked defense in the NFL, and couldn’t really contain rookie QB Justin Fields. Notice how Fields rebounded from the 9-sack effort against the Browns with 11-of-17 and 209 yards?

Toss in the fact that the Lions will be without one of their impact players in the front seven – edge rusher Romeo Okwara, out for the season – and Kirk Cousins should return to his early-season form. The Vikings should have success on the ground, as well, as Detroit gave up 188 yards to the Bears.

Yes, it’s a divisional matchup, and there’s been some money early in the week on Detroit, but the Vikings should win this handily.

PICK: Vikings to win by 15+ points

The defending Super Bowl champs lost two weeks ago and didn’t look impressive in New England against a rookie QB. The problem is the secondary injuries, which are mounting. Four secondary players may not be able to go for the Bucs, so monitor the injury report this week.

The thing is, can Jacoby Brissett take advantage behind that putrid offensive line? Despite covering the spread in a loss to Las Vegas, Brissett has been sacked nine times in two-and-a-half games, and he’s been pressured on 43 percent of his dropbacks, second highest after Carson Wentz. Tampa’s defensive line should own the trenches, and Todd Bowles dials up more blitzes than anyone else in the NFL (61, tops).

Maybe Brissett makes a couple splash plays to its strong receiver group to keep it close, or Tom Brady has a poor showing a week after facing Bill Belichick. But it’s difficult to envision a path to victory for the Dolphins here.

Expect a high-scoring game between two offenses that are growing more dynamic by the week. Daniel Jones is on the road again, where he has thrived (11-4 against the spread), including last week, when he torched the Saints for seven explosive passes. Without two of their top three receivers, Jones discovered first-round pick Kadarius Toney (6 catches, 78 yards) as a lethal new weapon. Jason Garrett has also bounced back after a rough start to the season, and the OC now faces his old team.

Still, the Cowboys have the third most efficient offense in the NFL behind the Chiefs and Rams, and they’ll have a lot of success against a team that let the Saints move eight of their 10 drives into Giants territory. The Giants figure to be a public dog this week, and I can’t back a defense that has been shredded by Teddy Bridgewater and Taylor Heinicke and let Jameis Winston have his best game of the season.

PICK: Cowboys to win by 7-9 points

Play FOX Super 6 every week for your chance to win thousands of dollars, including a $10,000 prize on the Big Noon Kickoff game of the week, the "Stack The Cash" college football promotion and, of course, the weekly NFL Challenge. Just download the Super 6 app and make your picks today!

Jason McIntyre is a FOX Sports betting analyst, and he also writes about the NFL and NBA Draft. He joined FS1 in 2016 and has appeared on every show on the network. In 2017, McIntyre began producing gambling content on the NFL, college football and NBA for FOX Sports. He had a gambling podcast for FOX, "Coming Up Winners," in 2018 and 2019. Before arriving at FOX, he created the website The Big Lead, which he sold in 2010.