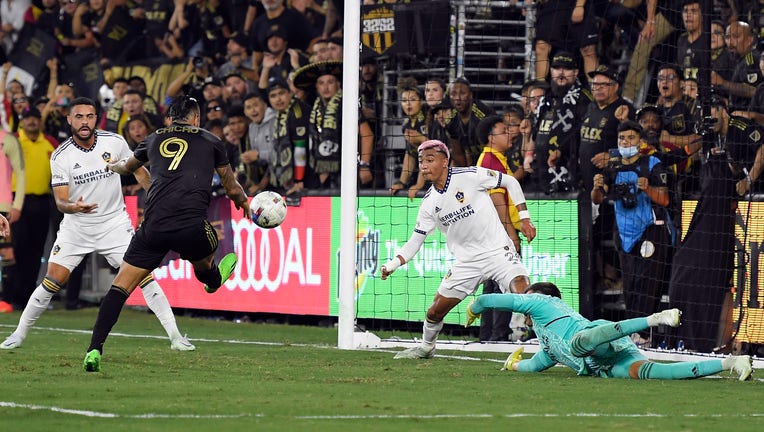 Arango scored on a rebound in the third minute of second-half stoppage time as LAFC advanced to the Western Conference final in the MLS Cup Playoffs on Thursday night with a 3-2 victory over the Galaxy in the latest dramatic edition of the rivalry known as El Tráfico.

"An exciting match and a little advertisement for MLS. Lots of goals, exciting football, passion, two teams giving everything they have," LAFC coach Steve Cherundolo said. "It took our very best to beat them. Our performance and aggression in the second half gave us the edge."

Kellyn Acosta directed a corner kick toward the middle of the box. Denis Bouanga, who scored twice, fired a shot that Galaxy goalkeeper Jonathan Bond saved, but Arango was there to pounce on the loose ball and scored in the 93rd minute.

"We had that belief we could put the ball in the box and create something out of nothing," Acosta said of the corner kick. "I knew if I could put it in the area, one of the guys would score the goal."

It was Arango’s fourth goal in five career matches against the Galaxy and third this season.

"Being able to win it like this brings a lot of joy. It was a goal for the team," Arango said. "I had to be where I was but my team set up our form and defended in the correct form. This goal represents the strength of our team."

LAFC, which captured the league’s Supporter’s Shield as the top team during the regular season, will host the winner of Austin FC and FC Dallas on Oct. 30 for the right to advance to MLS Cup on Nov. 5.

It is also the second time LAFC has defeated the Galaxy in the playoffs. The other was in 2019.

Samuel Grandsir and Dejan Joveljic scored for the Galaxy.

Bouanga has three goals in eight games since signing from France Ligue 2 club Saint-Etienne, He scored the match’s first goal in the 23rd minute when he got the pass from Carlos Vela, outbodied Galaxy midfielder Diego Costa from 6 yards out with a strike into the far right corner of the net.

The goal came at the end of a 19-pass sequence. The forward ran near the corner and did a front flip to celebrate the score.

The Galaxy evened it by taking advantage of a turnover. LAFC’s Eddie Segura was unable to clear the ball out of box with a header, before Grandsir grabbed the rebound and fired a right-footed shot from near the back of the box into the bottom left corner of the net.

It was Grandsir’s third goal in six matches against LAFC and second this season.

Bouanga put LAFC ahead in the 80th minute when he tucked it into the near post. Kwadwo Opoku was unable to finish after sliding to get the crossing pass, but Bounanga was there to knock it in after Bond originally tried to stop Opoku.

The Galaxy leveled it at 2-2 five minutes later when Joveljic, who came on as a sub in the 84th minute, fired a rocket past Maxime Crépeau into the top right corner.

The loss was only the second for the Galaxy in their last 13 games. They went 6-2-5 to end the season.

"In the first half we had a lot of the game, especially early on. They got a goal the first time we got a little bit passive," Galaxy coach Greg Vanney said. "We got ourselves into it and then it went back and forth.

"It has been a hell of a stretch of games that the guys have put together for over the last 12-13 games. I’m proud of this group. We’ve come a long way."

Bond and Crépeau each made two saves.