Dodger fans call it a rollercoaster ride.... the Boys in Blue lost to the Braves Wednesday night in Game 4 of the NLCS.

LOS ANGELES - A 9-2 loss to the Atlanta Braves Wednesday evening in Game 4 of the National League Championship Series has put the Los Angeles Dodgers on the brink of elimination.

Julio Urias allowed three solo home runs over the first three innings and six Atlanta pitchers limited the Dodgers to four hits before a crowd at Dodger Stadium announced at 53,025. 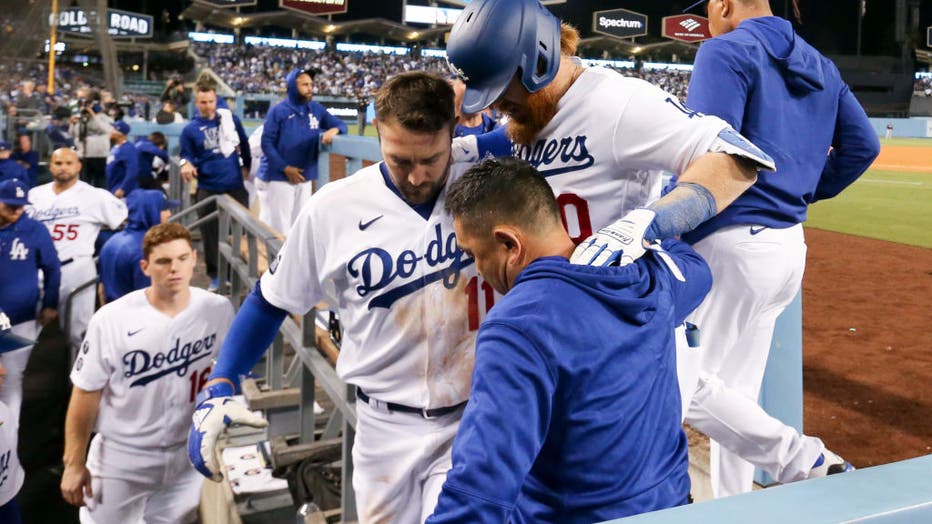 Los Angeles, CA - October 20: Los Angeles Dodgers' Justin Turner is helped into the dugout by AJ Pollock and staff after an apparent injury during the seventh inning in game four in the 2021 National League Championship Series against the Atlanta Bra

Eddie Rosario hit a solo homer in the second and a three-run homer in the ninth as part of a four-hit night as the Braves took a three games to one lead over the Dodgers in the NLCS for the second consecutive year. The Dodgers won the final three games of the 2020 NLCS, then defeated the Tampa Bay Rays in the World Series.

Game 5 of the best-of-seven series will be played Thursday at Dodger Stadium.

Rosario and Adam Duvall hit back-to-back homers in the second and Freddie Freeman homered leading off in the third. Rosario tripled with two outs in the third and scored two batters later on a single by Joc Pederson,  who played for the Dodgers from 2014-20.

The Braves increased their lead to 5-0 in the fifth. Ozzie Albies led off with a single, moved to third on Rosario's one-out single and scored on Adam Duvall's sacrifice fly.

The Dodgers didn't have a baserunner until Corey Seager drew a full- count walk from Drew Smyly with one out in the fourth.

Justin Turner singled with one out in the fifth for the Dodgers' first hit. Cody Bellinger hit the next pitch for a single, advancing Turner to third.

Chris Martin relieved Smyly and retired Chris Taylor on a fly out on his first pitch for the second out. Bellinger stole second. Pinch hitter AJ Pollock singled in Turner and Bellinger.

Following Pollock's hit, the Dodgers only had one hit over the final 3 1/3 innings, a single by pinch hitter Albert Pujols leading off the seventh. Turner, the next batter after Pujols, hit into a double play.

Turner suffered an apparent left hamstring injury running to first base and was forced to leave the game.

Atlanta added four runs in the ninth. Dansby Swanson led off with a single, stole second and scored on Freeman's ground-rule double for the first run.

It's business as usual. Fans are buying all sorts of items as they cheer on the Boys in Blues...and it's greatly helping many local businesses.

Smyly was credited with the victory, allowing two runs and two hits over 3 1/3 innings, striking out two and walking one in his first appearance since Oct. 2.

Urias was charged with his first loss since June 21, allowing five runs and eight hits in 5 innings, striking out three and walking two. Urias was MLB's winningest pitcher in the regular season with 20 victories.

Braves' manager Brian Snitker opted for a bullpen game and initially planned to start right-hander Huascar Ynoa. However, Ynoa experienced right shoulder discomfort while playing catch early Wednesday afternoon and was removed from the roster. He will not be eligible to play in the World Series should Atlanta advance.

Jesse Chavez started in Ynoa's placed and retired all three batters he faced, then was lifted for a pinch hitter.

The victory ended the Braves' 10-game losing streak at Dodger Stadium, which included two games of a National League Division Series in 2018.

The loss was the Dodgers' second in their last 20 games at Dodger Stadium.