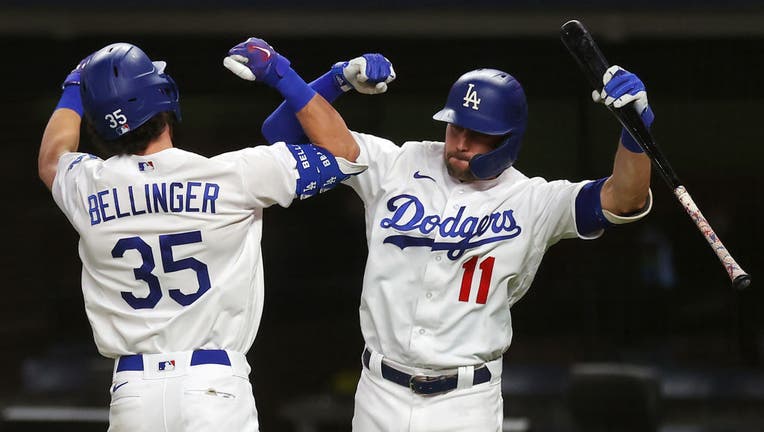 ARLINGTON, TEXAS - OCTOBER 18: Cody Bellinger #35 of the Los Angeles Dodgers is congratulated by A.J. Pollock #11 after hitting a solo home run against the Atlanta Braves during the seventh inning in Game Seven of the National League Championship Ser

ARLINGTON, Texas - The Los Angeles Dodgers beat the Atlanta Braves 4-3 in Game 7 of the NLCS, now they advance to face Tampa Bay Rays in World Series.

Dodgers advance to the World Series

Cody Bellinger hit a tiebreaking solo homer in the seventh inning and the Los Angeles Dodgers advanced to the World Series for the third time in four years by topping the Atlanta Braves 4-3 in Game 7 of the NL Championship Series on Sunday night.

Bellinger connected an inning after Kike Hernandez became the first pinch hitter with a game-tying or go-ahead homer in a winner-take-all-game. His homer tied it at 3 and, like Bellinger's, came on the eighth pitch of the at-bat.

The Dodgers, who matched an LCS record with 16 homers, overcame a 3-1 series deficit by winning three consecutive games when facing elimination for only the second time in their storied history.

After winning both their NL Division Series and the NLCS in the new $1.2 billion Globe Life Field, the Dodgers get to stay in place for the World Series. Game 1 against the American League champion Tampa Bay Rays is Tuesday night.

Fans in Hermosa Beach are so excited for the LA Dodgers heading to the World Series.

The Dodgers again will try to win their first World Series title since 1998. They lost Game 7 at home three years ago to the Houston Astros, and then lost in five games to the Boston Red Sox in 2018 when Mookie Betts was the AL MVP and playing against Los Angeles.

Tampa Bay's win in Game 7 of the ALCS late Saturday night wiped out the chance for an October rematch with the Astros, whose 2017 World Series victory over the Dodgers has been heavily tarnished by the revelations of Houston's sign-stealing tactics that season.

Betts, the first-year Dodger signed for 12 more years, made another incredible defensive play, robbing NL MVP candidate Freddie Freeman of a solo homer in the fifth. 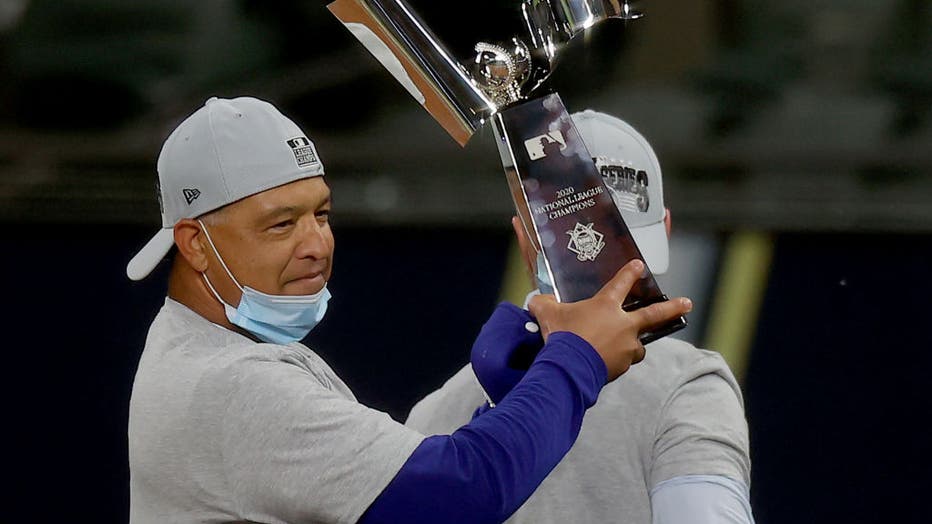 Julio Urias, the fifth Dodgers pitcher, retired the last nine batters for his fourth win in four appearances this postseason. The 24-year-old right-hander, already in his fourth postseason, has a 0.57 ERA in these playoffs.

The massive shot to right by reigning NL MVP and 2018 NLCS MVP Bellinger came on a 94-mph sinker after fouling off three pitches in a row by Chris Martin, the fifth Braves pitcher who started the seventh with strikeouts of Max Muncy and Will Smith.   Hernandez led off the sixth with a 424-foot drive to left-center off A.J. Minter.

Dansby Swanson homered for Atlanta, which hasn't been to the World Series since 1999.