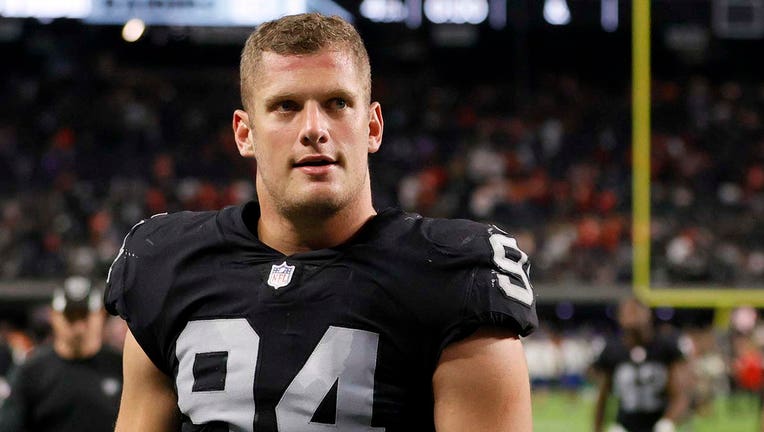 LAS VEGAS, NEVADA - NOVEMBER 14: Defensive end Carl Nassib #94 of the Las Vegas Raiders walks off the field the team's 41-14 loss to the Kansas City Chiefs at Allegiant Stadium on November 14, 2021 in Las Vegas, Nevada. (Photo by Ethan Miller/Getty I

TAMPA, Fla. - Carl Nassib is returning to the Tampa Bay Buccaneers on a one-year contract.

The outside linebacker wasn't on the field Tuesday morning for the Bucs final practice. The 29-year-old will have to pass a physical and sign the contract before he can rejoin the team.

He's expected to join the Bucs for their joint practices against the Tennessee Titans in Nashville starting Wednesday.

Nassib left the Bucs after his two most successful season in 2018 and 2019 when he totaled twelve and a half sacks. He signed a lucrative three year $25.250 million contract with the Las Vega Raiders as a free agent in 2020, but he was released by the Raiders in March in a cost-cutting move.

He became the first openly gay, active player in the NFL. During his announcement, he pledged $100,000 to the Trevor Project, which focuses on suicide prevention and mental health counseling for LGBTQIA+ youth.

Nassib, a favorite player for Bucs Head Coach Todd Bowles, will reunite with the coach he said has always been the best he's ever played for. In his last season with the Bucs, Nassib shared his thoughts about his then defensive coordinator with FOX 13 Sports.

"Don't tell him this, but he's probably my favorite coach I've ever had," said Nassib. "He's really smart and he knows football. A lot of time, you get a coach that just knows football, but he's got it all. He's an impressive person."

Prior to officially signing with the team, Bowles is glad to be getting Nassib back after losing reserve outside linebacker Cam Gill. Gill suffered a Lisfranc injury in the Bucs' preseason opener Saturday, so the Bucs are in need of Nassib.

"Carl’s tough in the run. When he played, when he was here with us, he’s a very good pass-rusher on the outside, and he can also play inside in some nickel situations," Bowles said. "He has a lot of versatility, he brings a lot of energy, brings a lot of toughness, and he understands the system. He was comfortable in it. We look forward to him coming here."