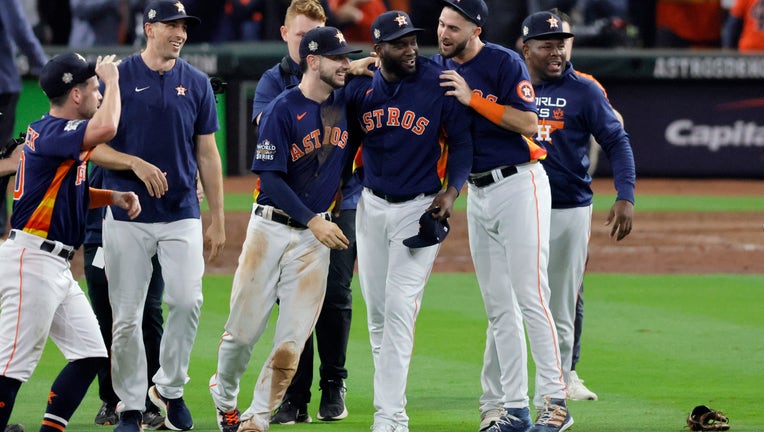 HOUSTON (AP) - Yordan Alvarez hit a moon shot that sent Space City into a frenzy, and the Houston Astros to their second World Series title.

While the stain on Houston’s first championship might never completely fade, Alvarez’s majestic three-run homer helped fashion a fresh crown for the Astros -- and the first for Dusty Baker as manager -- in a 4-1 win over the Philadelphia Phillies in Game 6 on Saturday night.

"What happened before, it doesn’t ever pass over completely," said Baker, the veteran manager hired by the Astros in the wake of their sign-stealing scandal. "But we have turned the page and hopefully we’ll continue this run." 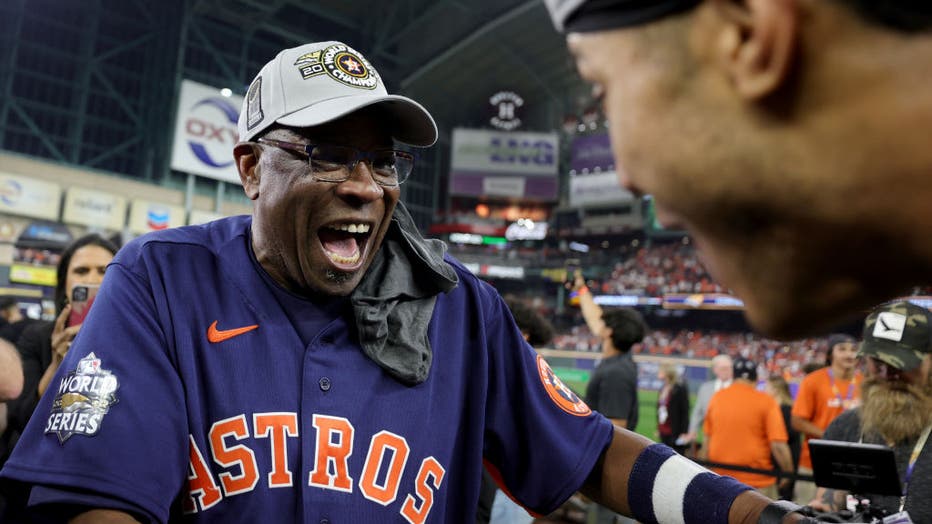 Alvarez blasted a ball over the 40-foot batter’s eye in center field during the sixth inning immediately after Phillies starter Zack Wheeler was pulled with a 1-0 lead.

"When I was rounding second base, I felt the whole stadium moving," Alvarez said through a translator.

The 73-year-old Baker finally got his first title in his 25th season as a manager. He's spent the past three with the Astros after they hired him to help the team regain credibility after their trash can banging scheme cost manager A.J. Hinch and general manager Jeff Luhnow their jobs, and made Houston the most reviled team in baseball.

People rushed to a sports gear store in Rosenberg, Texas, late on Saturday, November 5, after the Houston Astros defeated the Philadelphia Phillies to claim the World Series title. (Credit: Serbino Sandifer-Walker via Storyful)

"I wasn’t here in 2017, but it’s definitely a weight off of everybody’s shoulders. Ain’t nobody can say (anything) now," said closer Ryan Pressly, who finished the Series with another scoreless inning.

Baker, who won a World Series as a player with the Los Angeles Dodgers and had been to the Fall Classic twice before as a skipper, is the oldest championship manager in any of the four major North American sports. The win came 20 years after a near-miss, when he came within five outs of taking the title while guiding the San Francisco Giants.

"What’s next? I said if I win one, I want to win two," Baker said afterward.

Houston's coaching and training staffs circled around Baker after Nick Castellanos flied out to end it, jumping up and down, and chanting "Dusty! Dusty! Dusty!" in the dugout before they joined the players on the field.

Astros rookie shortstop Jeremy Peña was the World Series MVP after getting another key hit, a single to set up Alvarez's homer.

The 25-year-old star born in the Dominican Republic also won a Gold Glove award and AL Championship Series MVP — Peña is the first hitter to win those three awards in a career, and he did it all in his first season, per OptaSTATS.

Jerseys worn by Peña and Baker during the Series were headed to the Hall of Fame.

A year after watching the Atlanta Braves clinch the World Series title at Minute Maid Park, Justin Verlander and the Astros went 11-2 in the postseason and became the first team to seal the championship at home since the 2013 Boston Red Sox.

Alvarez homered for the first time since going deep in the first two games this postseason. Christian Vázquez added an RBI single later in the inning to make it 4-1.

Valdez earned his second win of this Series. He had been in the dugout only a few minutes after throwing his 93rd and final pitch while striking out nine over six innings.

But the lefty had walked off the mound with the wild-card Phillies up 1-0 on Kyle Schwarber’s homer leading off the sixth.

Schwarber, who hit his third homer in the past four games, rounded the bases waving his raised empty hand in the same motion as the fans with their towels.

But by the time Schwarber batted in the eighth, the NL's home run leader was reduced to bunting, trying for a hit to stir a dormant Phillies offense. His bunt went foul with two strikes, resulting in a strikeout.

In the sixth, Houston got two runners on base against Wheeler for the first time in the game, when Martín Maldonado was hit by a pitch, Jose Altuve grounded into a forceout and Peña singled.

Phillies manager Rob Thomson went to left-handed reliever José Alvarado to face the lefty slugger for the fourth time in the series — Alvarez had popped out twice and been hit by a pitch the first three times.

"I thought Wheels still had really good stuff. It wasn’t about that. It was just I thought the matchup was better with Alvarado on Alvarez at that time," Thomson said.

And Alvarado had allowed only three homers to lefty hitters in his six big league seasons, until his 2-1 pitch, when Alvarez crushed the 99 mph sinker.

"It’s kind of a dirty inning and I thought, I mean, going into the series it was always kind of Alvarado on Alvarez," Thomson said. "It was the sixth inning and I felt like the normal back end of the bullpen guys could get through it."

Alvarez hadn’t homered since Game 2 of the AL Division Series against Seattle, when his two-run shot in the sixth inning put them up to stay. That came after his game-ending, three-run shot in Game 1 for an 8-7 win.

Houston won an American League-best 106 games and reached its fourth World Series during a span in which it made it to the AL Championship Series six seasons in a row. The Astros made their only other World Series appearance in 2005, while still in the National League, and were swept in four games by the Chicago White Sox.

This was their third ALCS and second consecutive World Series since former Astros pitcher Mike Fiers revealed after the 2019 season, when he had gone from Houston for two years since being part of their 2017 championship, that the team had used a camera in center field to steal signs and signal hitters on which pitches to expect by banging on a garbage can.

"That will probably never go away but I think this just proves how good this team is and how good it’s been for a long time," Astros owner Jim Crane said on the field afterward.

Philadelphia was 22-29 when Joe Girardi was fired in early June and replaced by bench coach Thomson, the 59-year-old baseball lifer getting his first chance a big league manager — he was on the Yankees big league staff for 10 seasons with Girardi, and was part of their last World Series and title in 2009.

The Phillies finished the regular season 65-46 under Thomson, their 87 wins good for the sixth and final spot in the NL playoffs, on the way to their first World Series since 2009.

Phillies: In less than five months, the Phillies will be back in Texas to begin their 2023 regular season, about 250 miles away for the opener of an interleague series March 30 against the Texas Rangers.

Astros: Whether or not Baker and/or general manager James Click are back — neither is signed past this season — the World Series champs will play their 2023 season opener at home March 30 against the Chicago White Sox.