Longtime Angelenos describe the similarities and differences between the 1992 Los Angeles riots and the May 2020 unrest.

LOS ANGELES - In this episode, we speak to longtime Angelenos and explore their thoughts on the similarities and differences between the 1992 Los Angeles riots and the unrest felt across Southland in Summer 2020. 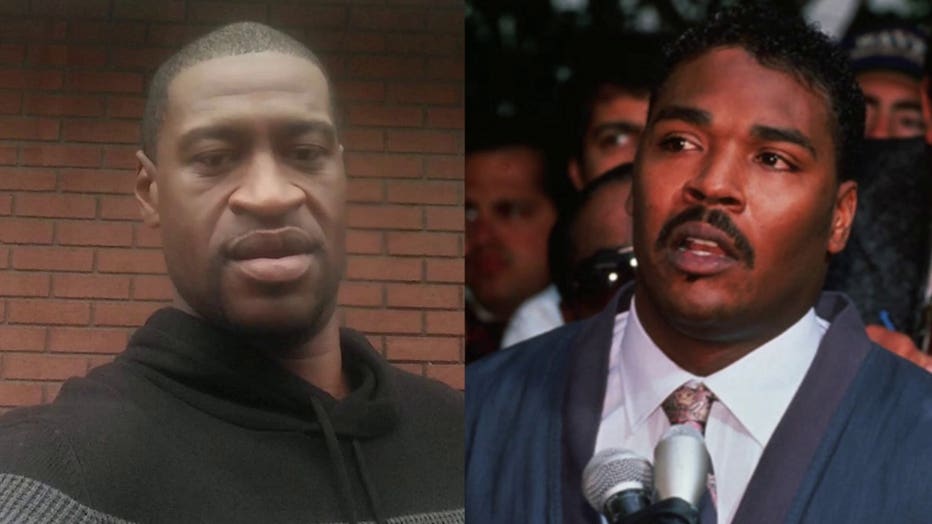 After the killing of George Floyd, FOX 11 Reporter Christina Gonzalez recounted one especially harrowing moment of coverage, one involving looters, a Good Samaritan, and a near arrest of that latter.

That story, and many others, are relived in FOX 11’s new five-part docu-series Rising Up.

On that Monday, Gonzalez had been assigned to cover protests at Van Nuys City Hall. While there, she heard word that small groups of looters had been breaking into nearby liquor stores and a Big 5 Sporting Goods, so she and her cameraman decided to follow the action.

"As we’re walking down Van Nuys, we go by a market liquor store, and there were two men outside with rather large rifles," Gonzalez recalled. "It occurred to me that these people were trying to protect the store."

Alongside those two men, Gonzalez spotted were a married couple, patrons of the store, who were remaining in place to protect it from a group of would-be looters who were intent on breaking into a nearby Gold Store.

"We’re not doing this out here in the valley," the woman, Monette Watley recalled saying to the looters. "You’re angry because of what happened to George Floyd, I understand that, I have the same anger that you have, but you’re taking your anger out on the wrong person, at the wrong people, the wrong business. These businesses had nothing to do with the death of George Floyd."

As the confrontation continued, cameras rolling the entire time, Watley, Gonzalez, and a host of bystanders began to unsuccessfully try and flag down passing patrol cars, many of which were attending to other, nearby calls. 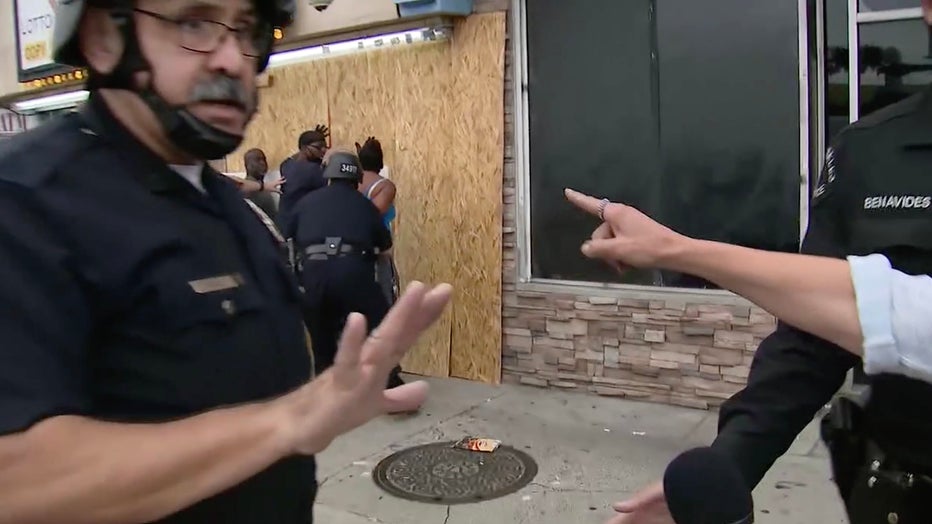 After a few minutes, police arrived on the scene.

That’s when the chaos truly began.

"I get taken between the owner and a Hispanic gentleman and thrown up against the wall," Watley recalled. "Someone called my daughter and told her, your mom is on TV, they’re going to take her to jail."

Despite being rattled, and admitting that she wishes she had been calmer in the heat of the moment, Gonzalez empathized with the situation police found themselves in.

"I can’t blame the police," Gonzalez admitted. "They don’t know the situation that they’re walking into, and I want to make that very clear."

To that point, representatives from the LAPD noted in a statement to FOX 11 that officers were responding to multiple calls of looting in the area, and that Watley fit the description of one such looting suspect. The LAPD statement also referenced the fact that after Watley was handcuffed, officers realized they had the wrong person, and released her within seconds.

"She was never cited, arrested, or transported," the statement continues. "We arrested a number of looting suspects Watley and Christina Gonzalez directed us to on Van Nuys Boulevard…. All others detained with [Watley] were immediately released as well."

Later that evening, after the dust had settled, and after a search of the surrounding area, Gonzalez was able to find and reconnect with Watley.

Standing on a sidewalk, cameras once again rolling, the two reflected on the unbelievable moments from earlier that day, as well as on Watley’s perspective having lived through the LA Riots in some 28 years earlier.

"I get it, I understand they’re tired," she said. "I’m 55… the same thing, the same injustice y’all did to us years ago, and my fathers, and my forefathers, you guys are doing to our young Black men, and our young Black women."

"That line sticks in my head," Gonzalez said of Watley’s answer. "If that doesn’t say it all, I don’t know what else does."