PONTIAC - A 13-year-old girl is being credited with saving her family when their Pontiac home caught fire.

The family of nine were asleep Thursday morning but all were lucky to get out alive because of Siyae Hunt's quick actions. Now they have little more than the shirt on their backs, and some of them didn't even get out with that.

31-year-old Jacqueline Witherspoon of Pontiac says no words or hugs are enough to thank her daughter for her quick actions.

"She really is my hero and I keep telling her that," Witherspooon said. "If she hesitated for a moment - the fire department says they don't know how anyone made it out alive."

It was around 2:00 Thursday and Witherspoon wasn't feeling well. She drove to the hospital to be checked out and got a call two hours later that the house on Wall Street was on fire.

"When I rushed home and it was up in flames and all I was worried about was my kids," Witherspoon said. (I was like) where are my babies?"

When she arrived, she found her family huddled together down the street. Siyae, her four brothers and sisters, her uncle and his wife, and their two kids. They were all there and all safe because of Siyae.

She said the alarm woke her up but fear didn't stop her, even as the fire began to spread.

"The power went off and smoke detectors and everything," Siyae said. "When I woke up it was all smokey and blurry and dark."

She woke everyone up and they all rushed out of the home. The roof collapsed as the flames spread to the house next door.

The family does not have insurance and The Red Cross is helping them out for a few days as they look for a new place to stay. Aside from each other, they have little more than the clothes they were wearing.

"We are one. We always gotta stick together at the end of the day," Witherspoon said.

The fire is believed to have been electrical and started in the garage.

There's a GoFundMe set up for the family of nine. If you want to donate, click here for more information. 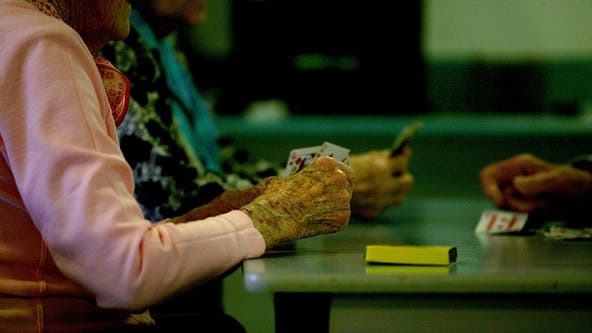