Rules are rules. Animal control officials in Los Angeles County have granted permission for a little girl to keep a unicorn at home, provided she follows strict guidelines.

LOS ANGELES - Weeks after the Los Angeles County Department of Animal Care went viral for granting a "unicorn license" to a young girl who asked if she could keep one of the animals if she were ever lucky enough to find one, the department announced that you too can get your own unicorn license.

This all started in November, when the department received a letter from 7-year-old Madeline, who asked if she could have permission to keep a unicorn in her backyard if she ever found one. Madeline met with the department several weeks later. After agreeing to several "conditions," like making sure the animal would have regular access to sunshine, "moonbeams and rainbows," and that its horn would be polished every month, among others, the department approved her license application. The letter and the department's response quickly went viral.

"Kind people sent Madeline gifts, such as a unicorn fleece blanket, unicorn stickers, and unicorn books," said Marcia Mayeda Director of Animal Care and Control in LA County. "The company that makes the Plushible unicorn generously sent Madeline a giant one that is about as big as she is. Madeline was overwhelmed and thrilled."

To further honor Madeline, the department has started "Madeline's Magical Unicorn Fund," through which contributors can receive their own pre-approved unicorn license and permanent unicorn license tag. The fund will help "support the adoption and care of unicorns and other less mystical animals," in LA County, said Mayeda, adding that "Madeline is happy that animals will be helped in her name." 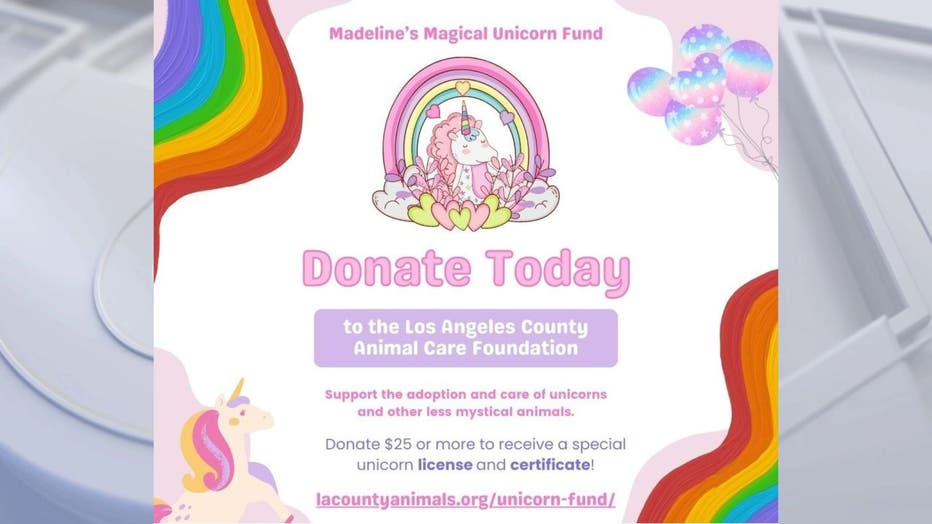 More information about how to donate and how to secure your own unicorn license can be found at lacountyanimals.org/unicorn-fund.

Why did we respond to a child, when there are so many pressing matters before our department," Mayeda asked in a press release. "Because I was Madeline, many years ago. We all were, in some form or another. I remember when I was a child and how impactful it was when a grown up took the time to respond to me and listen to my concerns. But her letter and our response went much further than this. It seemed to touch at the very core of what many people want to see in the world – innocence, compassion, and a little bit of humor."