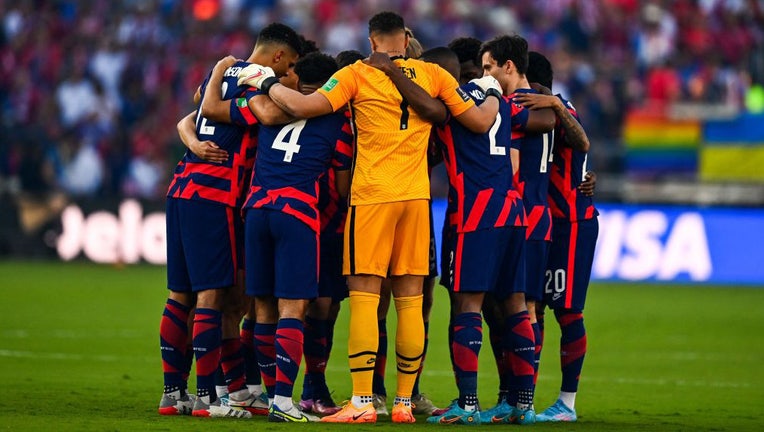 The Americans return to the World Cup following their failure to reach the 2018 tournament with what likely will be the youngest team among the 32 nations, a squad called the nation’s most talented generation yet inconsistent and unproven.

They earned the region’s final berth only on goal difference after a final-day loss.

We’re seeing key players recovering from injuries, as well. There's nothing about the preparation that should give you a lot of confidence."

After ending a streak of seven straight World Cup appearances, the United States opens Group B against Wales on Nov. 21, then plays England on Nov. 25 and finishes the first round against Iran on Nov. 29.

"If it goes well early we could be a really dangerous team in this tournament," Donovan said. "If it doesn’t, I could see it not going well at all. I don’t see too much of a middle ground just because young, inexperienced teams have the tendency to be really, really high and really good or really low."

RELATED: FBI teams up with FIFA to help protect the 2022 World Cup

The team coached by Gregg Berhalter heads to the tournament following a 2-0 loss to Japan and a 0-0 draw against Saudi Arabia, leaving the United States with one win, three losses and three draws in its last seven games against World Cup-bound nations. The Americans have been shut out six times.

"Obviously not the results that we were really hoping for going into the World Cup," United States midfielder Christian Pulisic said.

Still, given the unique timing of this World Cup in the middle of the European season, some have hope American players will step up.

"I still have a belief that this team, based on what they’ve done in big moments in the past," former United States midfielder Stu Holden said. "When the pressure is the highest and in the big, big moments, under the lights, these guys have this confidence in themselves that will I think hold them in a good stead."

Pulisic, the first American man to play in and win a Champions League final, has struggled for minutes under Chelsea coaches Thomas Tuchel and Graham Potter. Expectations have been a burden.

"It’s always when I come to the national team, it’s: How are things at Chelsea? How — what’s this, what’s that? And, yeah, it’s tough. It’s tough," Pulisic said last year. "Mentally it’s been difficult at times."

The 49-year-old Berhalter became the first person to coach the Americans after playing for them at a World Cup.
Hired in December 2018 and the brother of then-U.S. Soccer Federation chief commercial and strategy officer Jay Berhalter, he has used 91 players, giving debuts to 56. He favors a play-from-the-back 4-3-3 formation.

Just one holdover is likely from the 2014 squad, 29-year-old right back DeAndre Yedlin.

The average age of the United States team in qualifying was 23.82 — Ghana was second-youngest at 25.67 — and the average of the 31 teams that earned berths was 27.5, according to the USSF.

"That’s an accomplishment for these guys. It really is," Berhalter said.

The United States has not been this unsettled in goal since the 1980s, before the position became a backbone with Tony Meola, Kasey Keller, Brad Friedel and Tim Howard.

Matt Turner, who started in goal for eight of the 14 qualifiers and both September friendlies, is Aaron Ramsdale’s backup at Arsenal and likely will head to Qatar still awaiting his Premier League debut. Zack Steffen, largely limited to cup matches at Manchester City, was loaned to Middlesbrough, and Ethan Horvath was loaned from Nottingham Forest to Luton.

Central defense was weakened when Miles Robinson tore an Achilles tendon in May. Walker Zimmerman and Aaron Long, who started the September friendlies, were on clubs which were eliminated from the Major League Soccer playoffs on Oct. 15 and will have a layoff of more than a month heading into the opener.

Right back Sergiño Dest, unwanted by Barcelona, was loaned to AC Milan and has made just two starts since April.

Because of injuries and suspensions, Pulisic, Tyler Adams and Weston McKennie have started together only five times: a 2019 friendly against Ecuador, World Cup qualifiers against Honduras and Canada in January, and friendlies against Uruguay in June and Saudi Arabia in September.

"This is not a perfect team and I think Gregg Berhalter will be the first to say that," former United States defender Alexi Lalas said. "Ideally, you want your players playing and you want them playing well."