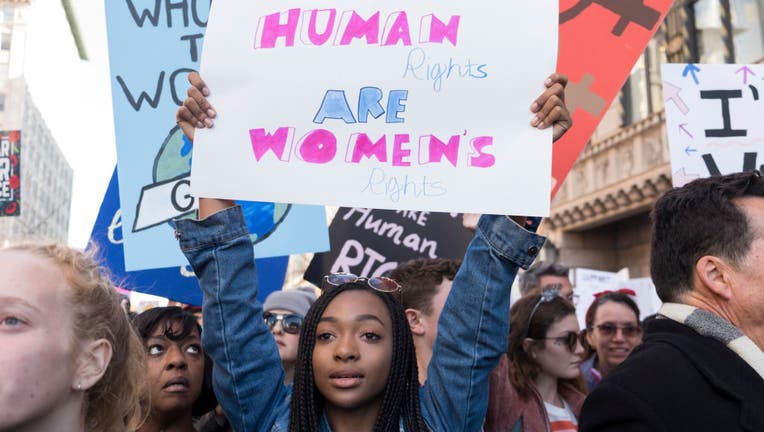 LOS ANGELES - Thousands of people took to the streets in downtown Los Angeles and other locations around the Southland Saturday to support reproductive rights, part of a nationwide series of demonstrations against Texas' near-total abortion ban.

About 20,000 people were expected to take part in the Women's March in Los Angeles, which began at 10 a.m. at Pershing Square and led to City Hall, where Rep. Karen Bass, Los Angeles County Board of Supervisors Chair Hilda Solis and Supervisor Holly Mitchell were set to speak, along with actresses Alyssa Milano and Patricia and Rosanna Arquette.

Thousands of people took to the streets in downtown Los Angeles and other locations around the Southland Saturday to support reproductive rights, part of a nationwide series of demonstrations against Texas' near-total abortion ban.

Similar gatherings took place in other parts of the Southland including:

-- Long Beach, with the group gathering at Deukmejian Courthouse and marching through downtown to Harvey Milk Park;

-- Pasadena, with the bike and car caravan group gathering at the Rose Bowl Lot I and traveling to Pasadena City Hall;

-- Irvine, with the group gathering at the corner of Alton Parkway and Culver Drive; and

-- Fountain Valley, at Mile Square Park at Brookhurst and Edinger.

The Women's March Foundation was holding its official march in Washington D.C., with more than 600 "sister marches" planned nationally.

The event will be the fifth Women's March, with this year focusing on abortion rights following a Texas ban on abortion after six weeks of pregnancy, when many women aren't aware they're pregnant.

The law -- which does not provide exceptions for cases of rape or incest -- allows private citizens to sue anyone who helps a woman obtain an abortion after six weeks, including the clinic or a person who drives the woman to the clinic.

"When the Supreme Court rejected an emergency request to block Texas's abortion ban, they effectively took the next step towards overturning Roe v. Wade. Simply put: We are witnessing the most dire threat to abortion access in our lifetime," the Women's March states on its website.

"That's why we're marching in every single state and in our nation's capital Washington, DC -- on Oct. 2 before the Supreme Court reconvenes. We need to send an unmistakable message about our fierce opposition to restricting abortion access and overturning Roe v. Wade before it's too late."

The first Women's March took place in 2017 on the day after President Donald Trump was inaugurated, becoming one of the largest public demonstrations in U.S. history. The Washington Post's analysis of the 2017 Women's March estimated that single-day marches drew between 3.267 million and 5.246 million people in the U.S. Local estimates found that about 750,000 people attended the Los Angeles march in 2017.

More information and a complete list of events is available at womensmarch.com.