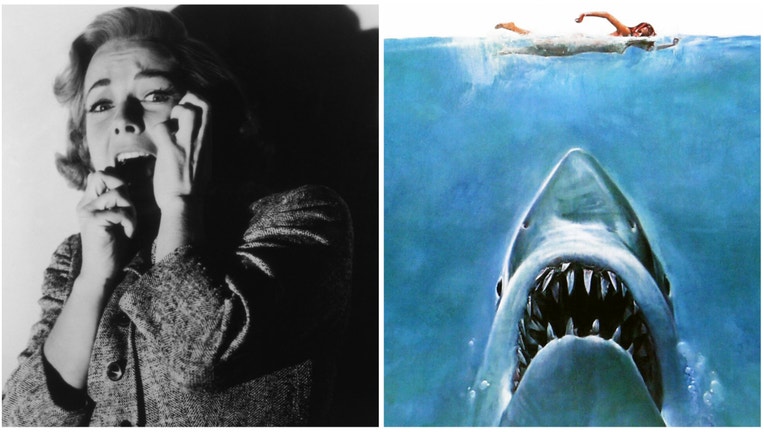 CHICAGO - A great movie theme sticks with its audience long after the credits have rolled. Whether it’s those two ominous notes from "Jaws," the menacing rhythms of Darth Vader’s "Imperial March" or the dissonant shrieks of the score for "Psycho," such musical moments can easily put down stakes in our minds and set up camp for years to come.

But why do these scores make such an impression on us? And how do they go about awakening fear, excitement or awe in the viewer? To help answer these questions, FOX Television Stations enlisted the help of James Miller, a licensed psychotherapist and piano composer who often uses music as a major component of his therapeutic practice. He’s long studied the effects of music on the human psyche and understands what the right track or musical mood can do for (or to) a person’s state of mind.

WATCH FREE ON TUBI: Legendary concert documentary "The Last Waltz" — get the app

"Every sound is a form of music," Miller explains; whether those sounds are percussive, come from string instruments or are made by our voices (which technically qualify as wind instruments), we encounter music everywhere. And our response to those sounds seems to be linked to tempo (the speed at which music is played) and whether or not the rate is above or below 80 beats per minute.

If the tempo is faster than 80 bpm — especially if the music in question uses more instruments or a bigger sound — the body produces adrenaline and the heart rate increases. A tempo below 80 bpm lends a feeling of peacefulness or ease, a sense heightened if the instrumentation is less dense and the musicians play the notes legato (smoothly, with little interruption).

The same principles apply to film music, and the experience conjured by the sounds is enhanced by what the viewer sees. "The music is going to set the tone, whether through the instrumentality or the meter," Miller notes. And the more senses you use to experience something, the more vivid your experience (and the memories you make) will be.

RELATED: Screamworthy: A ‘Hellraiser’ fan on the pins and outs of Hulu’s horror remake

In the case of film music, one often associates those sounds with specific experiences of the characters on screen.

With that framework in mind, we asked Miller about some of the most iconic and recognizable themes in cinematic history to see, in his professional opinion, why these tracks affect audiences so much — and why they endure for years, if not decades, after we’ve finished our popcorn and headed for the exits.

MILLER: There are major and minor keys to music, of course. But to know what’s a major or minor key, you have to be able to hear the third note in the key. What’s cool about "Jaws," though, is that all you hear is the first two notes — you don’t know whether it’ll be a major or minor key. That creates this subconscious "wait, what’s happening?" feeling; our body’s used to hearing more music, and the theme leaves us in suspense.

Also, the theme starts at a slow pace with those two notes, then goes faster and faster and faster. You’ve already created anxiety with the two notes, but the faster tempo also increases your fear and panic. That’s why everybody gets nervous around that theme! The other thing is Williams’ use of strings: to hazard a pun, they pull on your heartstrings and viscerally affect a person. And it’s played on a cello at first, so you don’t get the full package of what to expect musically. You have to fill in the blanks with your fear and anxiety, and that’s why it works so well.

WATCH FREE ON TUBI: "Shark Side of the Moon" — get the app

MILLER: This one’s really interesting, especially since it’s not an original composition but based on a piece of classical music, Richard Strauss’ "Thus Spake Zarathustra." That first expansive bass note stretches out for a good six or seven measures; when you hear it, it creates such an expanse, an eerieness and vastness because it’s at such a low level. When the musical frequency is that low, it exudes a feeling of uncertainty and the unknown. By contrast, we register higher frequencies more coherently because it’s usually the range at which we speak.

RELATED: Screamworthy: Dive into the depths of ‘The Descent’

Then you hear the trumpets. Historically, trumpets are used as a primary instrument in times of victory and championship, so you get that feeling. After that, Strauss takes that same chord progression and elevates it to a higher key, and it keeps building to convey a sense of majesty, of the possibilities of space exploration.

And the shot accompanying it, with the planets coming out of eclipse, you feel like you’re coming over the horizon, the sun filling the sky. That one works quite well because it creates that feeling of something greater than ourselves.

MILLER: Oh my gosh, I think everyone knows that theme. Especially when it bursts from that black screen with those screeching strings. It’s a startling thing that creates so much anxiety. It’s effective because there’s no build; it goes right into the full aspect of the composition; you’re immediately immersed in it. It’s like getting a bucket of cold water in the face.
As I said, music creates the tone for a film from the beginning, and here you’re steeped in so much anxiety. Without that score, no matter how good the movie would be, it wouldn’t be as powerful.

WATCH FREE ON TUBI: Jame Lee Curtis in the horror classics "Prom Night" and "Terror Train" — get the app

As it recurs throughout the movie, Hitchcock would create a sense that you’d hear the music playing every time something was wrong. But when Norman comes in, he switches it up and doesn’t play that theme. It creates this sense of confusion in the viewer, keeping us off guard since now we don’t know when something bad will happen. That’s what makes it so great: he initially slams us with this theme, then keeps us guessing for the rest of the runtime.

WATCH FREE ON TUBI: Alfred Hitchcock’s "Dial M for Murder" — get the app

MILLER: As we know, the premise of that movie involves dreams within dreams, which bears out in the score. That initial theme starts so low and quiet that you have to lean forward to determine what you’re even hearing. Then, like waking from a dream, you’re drawn in, and suddenly, the music gets louder. If you think of this conceptually, as a musician, you’re wondering whether you’re being pulled in more to the music organically, or is the music itself rising in volume.

That creates this space where you’re moving towards the music, whether mentally or physically in your seat. And the louder it gets, the more it draws you in, almost hypnotically. And I love how Zimmer also deconstructs these ideas at the end, like waking up from a dream: We’re stuck at that level from the beginning, and the music pulls away from us. It’s a wonderful concept, where the dynamics of the music itself create a beautiful way to draw the viewer into the world of the film.

MILLER: What I like about this theme is that Williams took the first major and fifth major chords, which are the primary chords of any major key, and kept playing them repeatedly with certain inversions. So every time you’d see Indiana Jones, you’d hear that majesty, that awesomeness, that adventure. And that repetition allows the viewer to associate that music with the exciting spirit of Indiana Jones, repeatedly creating that little bit of dopamine. Because we want to be just like him when we watch those movies.

That sprightly motif is a good way to impress that sense of adventure. The repetition of that theme so often through the movie indoctrinates the audience, in a way, into investing in Indy and his journeys.