The new PPE shortages come amid a spike in coronavirus cases and hospitalizations in several U.S. states.

Pence, speaking at a White House Coronavirus Task Force briefing on July 8, said PPE supplies remain “very strong,” but the Trump administration will be encouraging health care workers “to use some of the best practices” to “preserve and reuse” face masks and other protective equipment.

Pence claimed rates of positive coronavirus tests in the hard-hit Sun Belt states of Arizona, Florida and Texas were “flattening” and called for Americans to “keep doing what you’re doing.”

But contrary to Pence’s claims, daily rates of newly confirmed cases and hospitalizations in Texas quadrupled soon after Gov. Greg Abbott green-lighted one of the country’s earliest and most aggressive re-openings in May.

A week later, figures released by the Arizona Department of Health Services showed a record 3,421 people being treated, filling up nearly half the available hospital beds statewide. Intensive care units were caring for 879 patients, with 570 of them on ventilators to help them breathe.

And in Florida, the biggest hospital in the hardest-hit county, Miami’s Jackson Health System, reported last week that it scaled back elective surgeries and other procedures as it and others around the state braced for an influx of COVID-19 victims.

The Florida Department of Health reported another 9,989 cases since Tuesday, bringing the state’s total number of cases to a staggering 223,783. The death toll in Florida climbed to 3,889 on July 8.

More COVID-19 deaths were reported in Florida and Texas over the span of a month than total deaths caused by hurricanes over a span of 20 years, a stark reminder that the pandemic is not over.

In contrast to Pence’s statements, the head of the White House task force said that Americans in states that have seen a recent spike in cases need to do more to clamp down on gatherings in order to stem spread of the virus.

Dr. Deborah Birx said that in addition to closures of bars, ceasing indoor dining and wearing face coverings, Americans in hot spots should stop holding gatherings in their homes.

Pence’s urging of health care workers to reuse PPE is not new. Personal protective gear was in dangerously short supply during the early weeks of the coronavirus crisis in the U.S., and it is now running low again while the virus resumes its rapid spread and the number of hospitalized patients climbs.

A national nursing union is alarmed that gear still has to be reused. A doctors’ association warned that physicians’ offices are closed because they cannot get masks and other supplies. And Democratic members of Congress are pushing the Trump administration to devise a national strategy to acquire and distribute gear in anticipation of the crisis worsening into the fall. 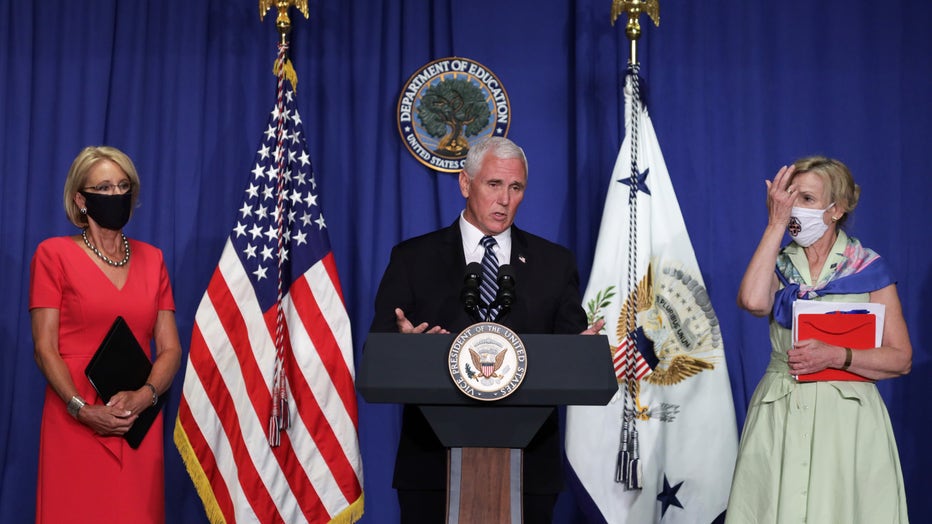 “We’re five months into this and there are still shortages of gowns, hair covers, shoe covers, masks, N95 masks,” said Deborah Burger, president of National Nurses United (NNU), who cited results from a survey of the union's members. "They’re being doled out, and we’re still being told to reuse them.”

An NNU survey conducted in May found that a majority of respondents reported having to reuse PPE intended for one-time use and reported a perceived extreme lack of regard for RN and patient safety by their employers.

One-third of the nurses who participated in the survey said they were expected by their employer to use their own sick leave, vacation, or paid time off if they were to contract COVID-19.

National Nurses United, the largest union for registered nurses in the United States, released the survey on May 20 of over 23,000 nurses, many of whom cited a “complete disregard for worker and public health on the part of health care employers and the government.”

Even an initiative by the federal government aimed at distributing reusable cotton face masks to various organizations, groups and businesses in an attempt to slow the spread of the coronavirus has run out of its supply.

Project: America Strong was created with the goal of “distributing reusable cotton face coverings to critical infrastructure sectors, companies, healthcare facilities, and faith-based and community organizations across the country to help slow the spread of COVID-19,” according to its U.S. Department of Health & Human Services website.

But according to the website, it appears the initiative has run through its inventory. The website featured a message on July 1 that read, “The demand for the face coverings has exceeded supply. As a result, we are no longer accepting new requests.”

Adding that face masks are currently more widely available from private vendors while also linking to the U.S. Centers for Disease Control and Prevention’s website containing instructions on how to make your own mask, HHS said, “We are currently assessing requests on hand and prioritizing delivery to support populations most susceptible to the disease.”

An HHS spokesperson confirmed that the agency is currently not taking any new requests for facial coverings and that the program was “part of a multi-prong approach to re-open American economic activity while continuing to limit the spread of COVID-19.”

Last month, the U.S. Department of Veterans Affairs acknowledged its current COVID-19 supplies may not be enough to handle a second wave of the deadly virus.

Dr. Richard Stone, the top health official at the VA, said at the height of the pandemic so far, its 170 medical centers were going through 250,000 N95 masks per day — a “daunting amount.”

Now, the VA has about a 30-day supply of gear, including masks and gowns, but it really needs a 60-day supply, he said, partly to address growing demands as the VA moves to fully reopen its medical centers due to the easing of stay-at-home orders nationwide.

To handle a possible second wave of COVID-19, it would need a six-month supply.

“A future pandemic wave may test all of us in our preparation,” Stone told the Senate Veterans Affairs Committee.

In the face of ongoing shortages, 2020 presidential hopeful and former Vice President Joe Biden is promising  to shift production of medical equipment and other key pandemic-fighting products “back to U.S. soil," creating jobs and bolstering a domestic supply chain he says has been exposed as inadequate and vulnerable by the coronavirus outbreak.

The presumptive Democratic presidential nominee's campaign released a plan July 7 to reinforce stockpiles of a “range of critical products on which the U.S. is dangerously dependent on foreign suppliers" in places like China and Russia. That includes medical equipment and pharmaceuticals, but also energy and grid resilience technologies, semiconductors and key electronics, as well as telecommunications infrastructure and raw materials.

Biden has long criticized President Donald Trump's administration for failing to press more private companies into production of ventilators and other critical medical and protective equipment during the virus outbreak under the Defense Production Act. The Republican president has countered that his use of the authority has been effective enough to save lives by “removing obstacles in the supply chain.”

The Biden plan released Tuesday promises to rely more heavily on the Defense Production Act while seeking to harness federal purchasing power to improve manufacturing capacity for products deemed vital to national security. It also includes an emphasis on increasing long-term, domestic pharmaceutical production, citing the Food and Drug Administration in reporting that more than 70% of active pharmaceutical ingredient facilities that currently supply the U.S. market are located abroad.