LOS ANGELES - It’s perhaps the most emotional moment from the Leukemia and Lymphoma Society's Light the Night event in Century City. FOX 11'S Amanda Salas holds up a white lantern signifying that she's a cancer survivor!

"Beating cancer is in our blood! Wooh!"

Amanda recently rang the bell marking the end of her chemo. She's been very open about her battle with non-Hodgkin’s lymphoma. She's led several fundraisers including a pancake breakfast at a fire station in Sherman Oaks.

She calls her supporters Amanda's Army; they've raised the most of any team here-- more than $41,000.

"Sergeant Salas is really proud of her army. They have left, right, left all month long and we've really gotten the support and the love," exclaimed Salas during the Light the Night event. 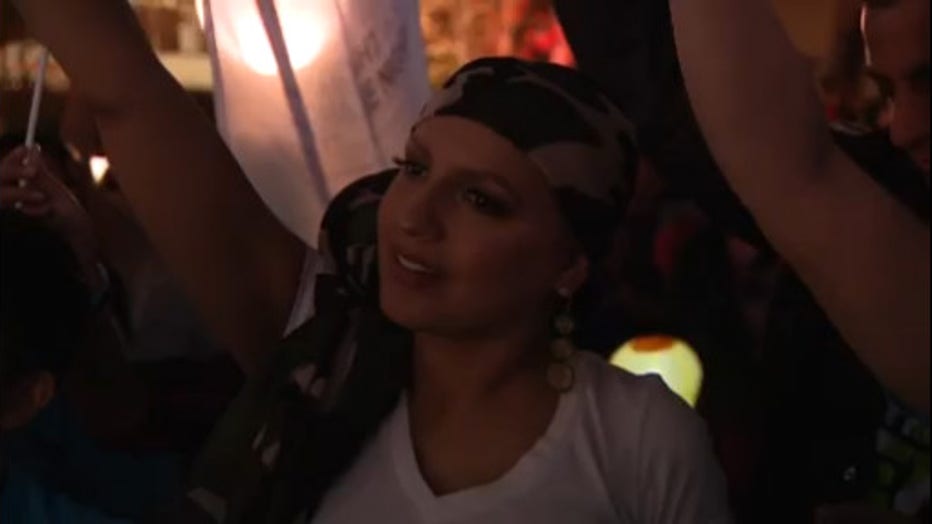 Almost all FOX 11 employees attended Light the Night and are a big part of her army.

But the MVP of this team is Amanda's mom, Anne Marie, who essentially moved in with Amanda to take care of her.

"Elex, there are no words to describe this night. It is just so amazing," stated Anne Marie Salas.

FOX11’s Elex Michaelson was honored to emcee the event.

“I made a promise to God if he let me beat this, I would pay it forward and I would help someone in need,” Salas shouted while talking to hundreds at the event.

Light the Night raises more than $1 million locally and more than $70 million nationally for cancer research and advocacy.

Shannon Sullivan is executive director of the Leukemia and Lymphoma Society of Southern California.

“What's special about this evening is it’s all about community,” Sullivan said.

“I'm here for my daughter, in remembrance of her. It means the world to me to be surrounded by friends and to recognize she's not forgotten,” Flynn said.

Red lanterns symbolize supporters of those battling cancer and Christian Espinal is holding a white survivor’s lantern for the first time. He reached out to Amanda via social media after seeing her journey.

“Every time I feel bad, she messages me and makes me feel that I don't have to be alone in the situation,” Espinal stated.