OLYMPIA, Wash. - Washington and Oregon will drop masking requirements for schools and most public places on March 12, the states jointly announced.

"With declining case rates and hospitalizations across the West, California, Oregon and Washington are moving together to update their masking guidance," the governors said in a statement. There are more than 7.5 million school-age children across the three states.

The new guidance will make face coverings a recommendation rather than a requirement at most indoor places in California starting March 1 and at schools on March 12, regardless of vaccination status. In Washington and Oregon, all the requirements will lift on March 12.

Seattle Public Schools announced on March 9 that the district would also be dropping its mask mandate starting March 14.

King, Snohomish and Pierce counties all said they would end local indoor mask orders at the same time as Washington state.

Federal mask requirements will still apply in high-risk indoor settings such as public transportation, airports and taxis. The Centers for Disease Control and Prevention is developing guidance that will ease the nationwide mask mandate for public transit next month, according to a U.S. official, but the existing face covering requirement will be extended through April 18.

"We’ve continued to monitor data from our state Department of Health, and have determined we are able to adjust the timing of our statewide mask requirement," Inslee said in a statement. "While this represents another step forward for Washingtonians, we must still be mindful that many within our communities remain vulnerable. Many businesses and families will continue choosing to wear masks, because we’ve learned how effective they are at keeping one another safe. As we transition to this next phase, we will continue to move forward together carefully and cautiously." 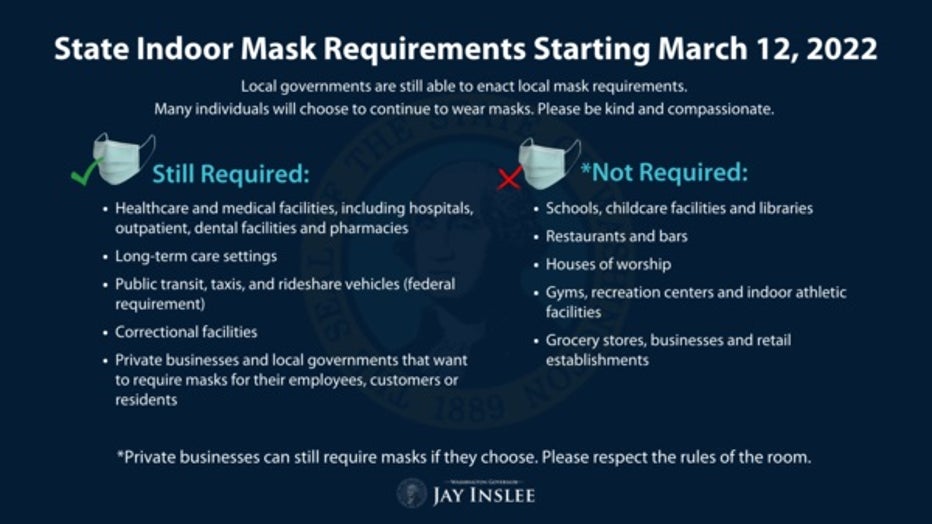 The only change to Washington's previous announcement is moving the date for ending most masking requirements from March 21 to March 12, Inslee's office said.

Seattle's Climate Pledge Arena told FOX 13 News that starting March 1, it will no longer require proof of vaccine or a negative test to attend Seattle Kraken hockey games. However, select concerts may require vaccine verification if the artist or tour stipulates it.

The Centers for Disease Control and Prevention released new guidance on mask-wearing on Feb. 25, and it suggested that the majority of Washingtonians can go maskless right now.

Gov. Jay Inslee previously said he would keep the indoor mask requirement in effect until March 21.

Most of Washington can go maskless, according to CDC

However, following the CDC announcement, Inslee's office said, "We have not had a chance to review the new guidance. Once that has happened, there will be a broader discussion with the governor’s office and the Department of Health about its implications for our state."

Using a series of metrics based on a community’s hospital capacity and the rate of new COVID-19 hospitalizations, the CDC came up with a simple-to-understand color code system for each county in the country.

Orange is a high potential for healthcare system strain and a high level of severe disease.  The CDC is also suggesting everyone in an orange county wears a mask in public indoor settings including schools.

The CDC says people may choose to wear a mask at any time but those with symptoms, a positive test or exposure to COVID should wear a mask.

Okanogan, Chelan, Douglas, Grant, Pierce, Cowlitz, Wahkiakum, Jefferson and Clallam have all been labeled as orange by the CDC.

Sixty percent of the state’s 39 counties have a majority of Republican voters. In many of those areas, people have not been following the governor’s mask mandates for some time.

Wilcox says the governor talks about following the science to make policy decisions. He says he should follow the advice of the scientists at the CDC.

"We have to assume he is following the science and I think it’s time to tell people in the state, at least for now, all of this stress is over," says Wilcox.

One of the factors the governor has set up as a key metric to lifting the indoor mask requirement is the seven-day average of new COVID hospitalizations per 100,000 people.

The CDC is still advising that people, including schoolchildren, wear masks where the risk of COVID-19 is high. The new recommendations don't change the requirement to wear masks on public transportation.

The milestone, two years in the making, comes as much of the country relaxes public health orders, including school mask mandates, in an effort to restore normalcy and boost economic recovery. The changes reflect a growing sense that the virus is not going away and Americans need to learn to live with it. New York Gov. Kathy Hochul, a Democrat, announced Sunday that the state’s masking requirements in schools would be lifted by March 2. New Jersey, Delaware, Massachusetts and others recently made similar adjustments to ease restrictions for schools.

The announcements signal a turning point that is poignant in its timing, coming almost exactly two years after American cities began shutting down to prevent COVID-19′s spread. California was the first state to announce a shutdown with stay-at-home orders in March 2020, followed soon after by other states.

"Two years ago today, we identified Oregon’s first case of COVID-19," Oregon Gov. Kate Brown said in the statement. "On the West Coast our communities and economies are linked. Together, as we continue to recover from the Omicron surge, we will build resiliency and prepare for the next variant and the next pandemic."

Earlier this month, California became the first state to formally shift to an endemic approach to the coronavirus with Gov. Gavin Newsom’s announcement of a plan that emphasizes prevention and quick reaction to outbreaks over mandated masking and business shutdowns.

Newsom has come under growing pressure from Republicans and other critics to ease the school mandate, which has increasingly become a polarizing issue among parents in California.

While many parents still support wearing masks in schools, others have questioned why it’s necessary when they are no longer required to do so in supermarkets and elsewhere. On Feb. 15 California ended an indoor mask requirement for vaccinated people, but at that time left the rule in place for the unvaccinated and for schoolchildren.

Starting Tuesday in California, masks will no longer be required but "strongly recommended" for unvaccinated individuals in most indoor settings. The same shift will apply to K-12 schools and child care facilities starting March 12, the statement said.

The powerful California Teachers Association said it expected a mixed reaction to the announcement at schools across the country’s most populous state.

"Simply put, while some students are ready to immediately remove their masks, others remain very afraid," CTA President E. Toby Boyd said in a statement. The union has more than 300,000 members. "Change is never easy, and today’s announcement is bound to disrupt and destabilize school communities."

A handful of California school districts have already dropped mask mandates for students in recent weeks in open defiance of the state mandate.