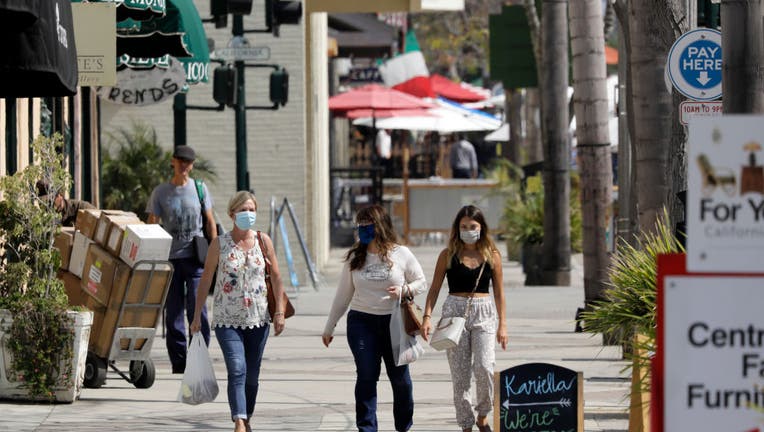 VENTURA, CA - OCTOBER 07: Pedestrians walk along Main Street in downtown Ventura on Wednesday, Oct. 7, 2020. Data released by the California Department of Public Health on Tuesday confirmed that Ventura County has moved into the less restrictive red

Some of the other counties included some in the Central Valley that saw major case spikes over the summer, but the state’s top health official warned that upcoming Halloween celebrations pose a risk for renewed spread.

Dr. Mark Ghaly, the state health secretary, said no counties moved backwards in California’s color-coded, four-tiered system for reopening, but Riverside was on the verge of reverting to the most restrictive purple tier. The county of about 2.5 million residents has asked for a review of its data and will stay in the red tier until the state makes a decision on its status later this week.

“Moving back a tier is important,” Ghaly said. “We don’t want to do it without a significant degree of conversation and understanding.”

Riverside County Public Health Officer Dr. Cameron Kaiser said the county hopes to persuade the state that it can maintain its current status while still slowing the spread of the virus. A slip back to the purple tier would adversely affect small businesses like restaurants and gyms, which could be forced to shut down indoor operations again, the county said in a statement.

Two San Francisco Bay Area counties, Alameda and Santa Clara, will advance to the less-restrictive orange tier, which allows for increased capacity at restaurants, movie theaters and houses of worship — all with modifications to require face coverings.

The lifting of some restrictions in counties that have shown improvement comes as California sees a continued drop in COVID-19 cases. The seven-day positivity rate was down to 2.7%, Ghaly said. The number of hospitalizations is about 2,225 — a significant drop from a peak of around 7,000 over the summer, he said.

Ghaly said overall trends are moving in the right direction, thanks in part to Californians’ increased willingness to wear masks and avoid large gatherings.

“The more that that becomes widespread around the community, we’re going to see these numbers stabilize and come down,” Ghaly said.

But he added “we’re not out of the woods, and we’re seeing a number of increases across the country, and across the world in terms of cases, hospitalizations, and deaths.”

Officials are urging families to skip trick-or-treating this Halloween and instead have costume contests and pumpkin carvings online.

“The whole act of going door-to-door in groups ringing doorbells, digging into buckets of delicious candy, create a risk of spreading COVID-19,” Ghaly said. But he stressed that it was a recommendation, not a rule, and trick-or-treaters will not see any enforcement.

California on Friday night also eased restrictions to allow up to three households to socialize outdoors, an expansion of rules aimed at people tempted to have even larger gatherings around Halloween, Thanksgiving and end-of-year holidays.

Meanwhile Tuesday, Fresno County stayed in the red tier and four other counties in the central part of the state — Kern, Colusa, Sutter and Stanislaus — advanced from purple to red. Those improvements were particularly gratifying after those counties experienced worrying trends just months ago.

“It’s great news to see some of the Central Valley counties continue to move forward with their reductions in transmission,” Ghaly said.

The state is moving more slowly than the reopening last spring that brought with it a dramatic spike in cases, hospitalizations and deaths. California, the most populous state, leads the nation with more than 852,000 confirmed cases and has the third-highest number of deaths at about 16,500, according to state data.

For most people, the new coronavirus causes mild or moderate symptoms, such as fever and cough that clear up in two to three weeks. For some, especially older adults and people with existing health problems, it can cause more severe illness, including pneumonia and death.\