While the Uvalde, Texas police department and local school district police have cooperated with state Department of Public Safety investigators into the massacre that killed 19 children and two teachers at an elementary school and the law enforcement response, the chief of the school police has not responded to a request for a follow-up interview.

Local authorities have come under pressure since a Friday press conference in which Steven McCraw, the head of the Texas Department of Public Safety, said the delayed police response to the mass shooting was "the wrong decision." 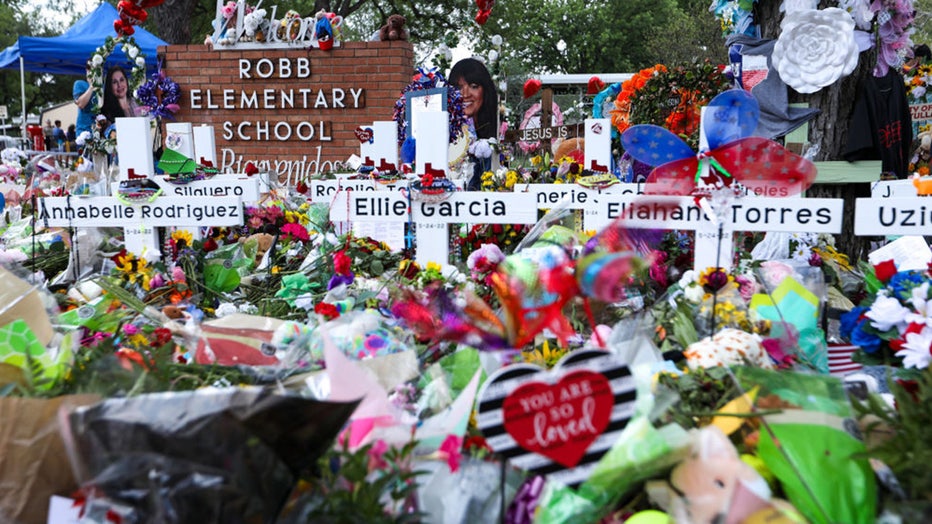 FILE - People visit a memorial for the 19 children and two adults killed on May 24th during a mass shooting at Robb Elementary School on May 30, 2022 in Uvalde, Texas.

"The Uvalde Police Department and Uvalde CISD Police have been cooperating with investigators," the statement said. "The chief of the Uvalde CISD Police provided an initial interview but has not responded to a request for a followup interview with the Texas Rangers that was made two days ago."

Arredondo reportedly made the decision to not immediately confront suspected shooter Salvador Ramos, 18, at Robb Elementary School during his rampage last week. Authorities waited in a school hallway for nearly 50 minutes before breaching a classroom door.

McCraw said that Arredondo thought the situation had transitioned from an active shooter to a barricaded subject, and that they had time to wait for tactical equipment and keys to unlock the classroom's door.

The police response as well as the flow of inaccurate information by law enforcement in the days after have generated criticism from parents of the victims as well as officials who had praised authorities immediately afterward.

Lt. Gov. Patrick told Fox News on Saturday that law enforcement's choice not to immediately confront the shooter was a "bad decision, and that decision cost lives."

"No one mentioned the fact that there was this 45 minute-to-an-hour hold by the chief of the police of the school district while there were still shots being fired," Patrick said.

"Local law enforcement has not made any public comments about the specifics of the investigation into the incident or [misled] anyone," McLaughlin said in an emailed statement to Fox News Digital on Monday.

"Statements by Lt. Governor Dan Patrick that he was ‘not told the truth’ are not true. All statements and comments made to date about the ongoing investigation are being handled by DPS/Texas Rangers."

The police advocacy group, The Combined Law Enforcement Associations of Texas, or CLEAT, is calling for an independent investigation and encourages members to cooperate with investigators.

"There has been a great deal of false and misleading information in the aftermath of this tragedy," a statement read. "or this reason, we believe that a strong, independent investigation by the U. S. Department of Justice with assistance from the FBI will discover what really happened, thus helping agencies everywhere to understand how best to stop a similar compounded tragedy from happening again."