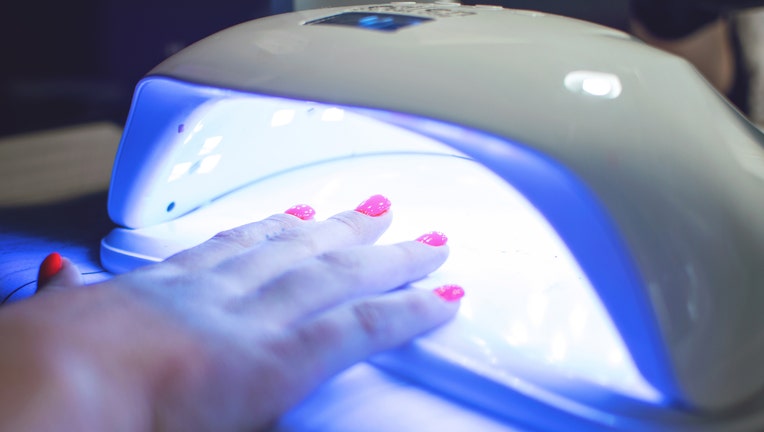 Stock photo of a hand with red nails in the lamp for manicure. via Getty Images

UV nail polish drying machines are a common accessory to manicures, but a new study shows they pose more of a health risk than previously considered – and include the potential for being cancerous.

The machines are most commonly used for gel manicures, which use a type of gel-based polish that needs special light to "cure."

Researchers at the University of California San Diego found that even one session under the lamp’s UV light causes cell death — and that chronic use was especially damaging and brought about cancer-causing mutations.

"The researchers found that the use of these UV emitting devices for just one 20-minute session led to between 20 and 30 percent cell death, while three consecutive 20-minute exposures caused between 65 and 70 percent of the exposed cells to die," UC San Diego Today reported.

Furthermore, researchers found DNA damage in the still-living cells and observed mutations that looked similar to those seen in humans who have skin cancer.

The study’s findings were published earlier this week in Nature Communications.

Tanning beds, another popular cosmetic device that uses UV light, have already been proven to be carcinogenic. Researchers note that nail polish drying lamps use a different spectrum of UV light than tanning beds and have not been as thoroughly studied.

One of the study’s authors, Ludmil Alexandrov, who is also a professor of bioengineering as well as cellular and molecular medicine at UC San Diego, said the idea for the research came to him when he read a magazine article about a young beauty contestant who was diagnosed with a rare form of skin cancer on her finger.

"I thought that was odd, so we began looking into it, and noticed a number of reports in medical journals saying that people who get gel manicures very frequently – like pageant contestants and estheticians – are reporting cases of very rare cancers in the fingers, suggesting that this may be something that causes this type of cancer," said Alexandrov.

Researchers caution that more, long-term observation is needed before stating conclusively that these machines lead to an increased risk of skin cancer.

For now, researchers say the new information concludes that using the lamps is riskier than previously believed, and that further study is needed to know just how risky.