Peter Chin-Hong, MD, a professor in the UCSF Health Division of Infectious Diseases, speaks with LiveNOW's Andrew Craft about tri-demic concerns regarding COVID-19, RSV and the flu. Dr. Chin-Hong also speaks about the shortage of children's medications across the U.S., and what parents can do if they are in need of medicine that they cannot find.

WASHINGTON (AP) - U.S. military forces around the world will no longer be required to get the COVID-19 vaccine, after the mandate was lifted under an $858 billion defense spending bill passed by Congress and signed into law Friday by President Joe Biden.

The department has 30 days to work out the details for rescinding the mandate. The Pentagon said Friday that in the meantime the military services would pause any personnel actions, such as discharging troops who refused the shot, and all troops would still be encouraged to get vaccinated and boosted.

Biden had opposed the Republican-backed provision, agreeing with Defense Secretary Lloyd Austin that lifting the mandate was not in the best interests of the military, according to White House officials. But he ultimately accepted GOP demands in order to win passage of the legislation.

The contentious political issue, which has divided America, forced more than 8,400 troops out of the military for refusing to obey a lawful order when they declined to get the vaccine. Thousands of others have sought religious and medical exemptions.

The new law effectively ends those exemption requests, but questions remain about whether any limited restrictions may continue for troops on specific missions or assigned to areas of the world where vaccination is still required.

Austin, who instituted the mandate last August after the Pfizer vaccine was approved by the Food and Drug Administration and as the coronavirus pandemic raged, was staunch in his desire to maintain it insisting the vaccine was necessary to protect the health of the force. And he and other defense leaders argued that for decades troops, particularly those deployed overseas, have been required to get as many as 17 different vaccines. No other vaccine mandates were affected by the new law.

But Congress agreed to rescind the mandate, with opponents reluctantly saying that perhaps it had already succeeded in getting the bulk of the force vaccinated. Roughly 99% of active-duty troops in the Navy, Air Force and Marine Corps had gotten the vaccine, and 98% of the Army. The Guard and Reserve rates are lower, but generally are more than 90%.

After signing the defense bill on Friday, Biden said in a statement that certain provisions "raise concerns," but overall it "provides vital benefits and enhances access to justice for military personnel and their families, and includes critical authorities to support our country’s national defense, foreign affairs, and homeland security."

The bill includes about $45 billion more for defense programs than Biden had requested and roughly 10% more than last year’s bill as lawmakers looked to account for inflation and boost the nation’s military competitiveness with China and Russia. It includes a 4.6% pay raise for servicemembers and the Defense Department’s civilian workforce. 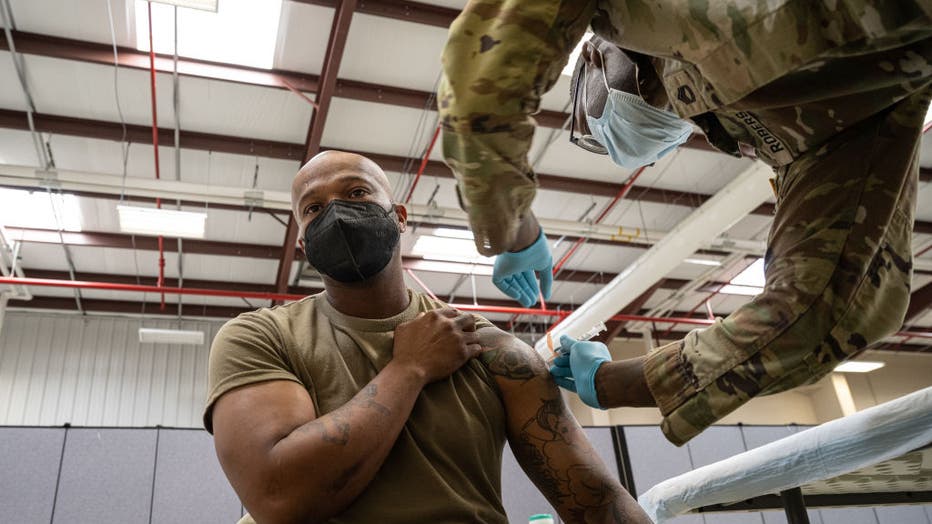 According to U.S. officials, the department will take at least some of the next 30 days to work out the details of rescinding the vaccine mandate and decide what specific orders will come from Austin and what, if any, flexibility he will leave to service secretaries and chiefs.

Defense officials familiar with the ongoing discussions said there have been high-level meetings on the issue with some spirited discussions, and that service leaders have made it clear that they want clear, specific guidance and for everyone to implement the new directive the same way.

The officials, who spoke on condition of anonymity to discuss internal deliberations, said the department is reviewing legal and medical advice as they figure out how to mitigate any potential health risks in military missions.

Austin, however, could leave some decisions to the services -- including whether they can require vaccines in some circumstances, such as certain deployments overseas. In recent public comments, Navy Secretary Carlos Del Toro suggested that rescinding the vaccine mandate could divide the service into two classes of people: those who can deploy and those who can’t.

Military officials vividly recall the overwhelming crisis of the USS Theodore Roosevelt, the Navy aircraft carrier that was knocked out of duty and sidelined in Guam for 10 weeks in early 2020 as the emerging virus swept through the ship. More than 1,000 crew members eventually became infected, and one sailor died.

Military leaders worry that if troops begin to refuse the vaccine in large numbers, similar outbreaks could occur. The risk is particularly high on small ships or submarines where service members are jammed into close quarters for weeks or months at a time, or on critical combat missions, such as those involving special operations forces that deploy in small teams.

What appears clear is that the department won’t be forced to bring back service members who refused the vaccine and were discharged for failure to obey an order. An amendment to require their reinstatement with back pay failed to pass.

According to data compiled by the military as of early December, the Marine Corps leads the services with 3,717 Marines discharged. There have been 2,041 discharged from the Navy, 1,841 from the Army and 834 from the Air Force. The Air Force data includes the Space Force.

What’s not clear is if the services, who are facing recruiting challenges, will want to allow some service members to return, if they still meet all necessary fitness and other requirements.

Lawmakers argued that ending the mandate would help with recruiting. Defense officials have pushed back by saying that while it may help a bit, a department survey done during the first nine months of this year found that a large majority said the mandate did not change the likelihood they would consider enlisting.