Two men were caught on surveillance video killing and mutilating a cat outside a Pomona business. Police released video of the incident in hopes the public can recognize the suspects.

LOS ANGELES - Police are looking for two men who were caught on video killing and mutilating a stray cat in Pomona.

The video is dark, grainy, and disturbing. Two men stop their vehicle in front of a Pomona business at 560 Union Avenue and shoot one of the cats in the parking lot… killing it.

The pair then jump over the fence and walk to the animal, which had stopped flailing by then. One of the men take out some kind of sharp object and proceeds to cut it open, while the other one seems to use his cellphone to record it.

Store owners found the mutilated animal the next morning and called Pomona Police and the Inland Valley Humane Society.

Investigators released surveillance video of the men in hopes the public can recognize them.

"We’ve never had anything like this happen, it’s horrible," said Collin Lee, who explained the small family business has been at that location for years. 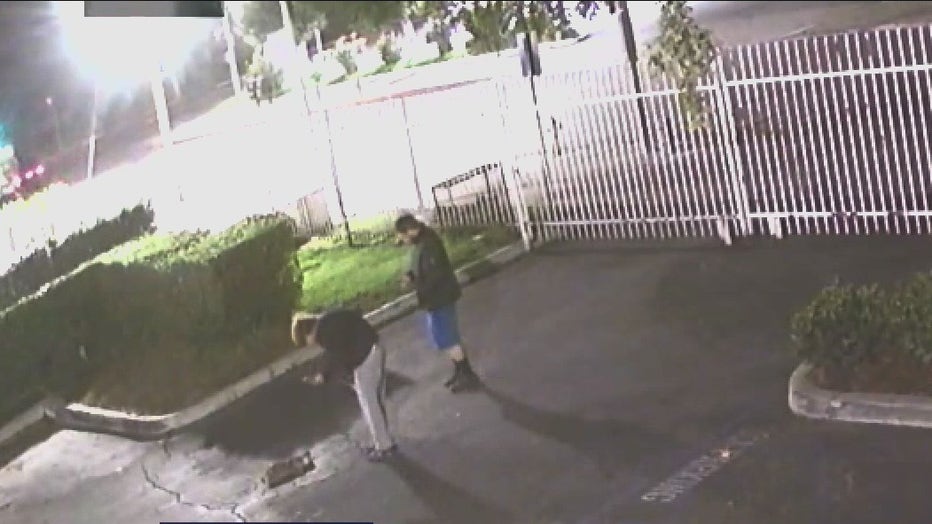 Employees at CFR Patio feed the feral cats in the area, and have taken some home "but we can’t take every one of them, so we try to take care of them here as much as we can".

Some of the animals are pretty friendly, including Scruffy, the one that was killed. Someone was getting their home ready to take her with them.

The humane society has taken the cat's body as evidence. They are looking over security video from other businesses in the area to helping the investigation.

Anyone who recognizes the vehicle or the two men are urged to contact the Inland Valley Humane Society and S.P.C.A. at 909-623-9777. They also have an after hours emergency number, usually reserved for injured animal response, at 909-594-9858.