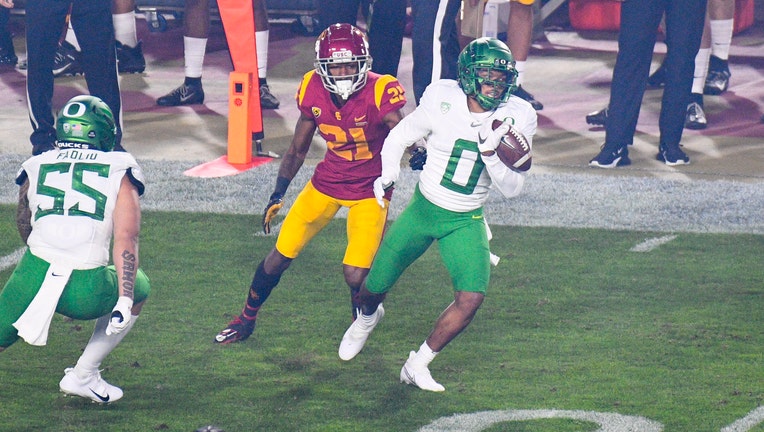 USC quarterback Kedon Slovis and the Trojans offense had multiple chances to complete a fourth-quarter comeback, but the sophomore signal-caller threw three interceptions in the loss.

The Trojans, who captured the Pac-12 South division title, fell behind early after quarterback Kedon Slovis was picked off by Oregon's defensive back Deommodore Lenoir in USC's first drive of the game. Following the interception, the Ducks scored after a quick, 3-play drive to take a 7-0 lead.

Later in the first quarter, Slovis threw another interception, this time to Oregon's defensive back Jamal Hill. The Ducks, again, capitalized on USC's turnover by scoring another touchdown to take a 14-0 lead.

With a minute left in the first quarter, Trojans wide receiver Amon-Ra St. Brown hauled in a 47-yard touchdown pass from Slovis to finally put USC on board.

Near the half-way point of the second quarter, Oregon tight end DJ Johnson scored on a 16-yard touchdown pass from quarterback Tyler Shough to extend the Ducks' lead.

Following Oregon's scoring drive, Slovis led a 12-play, 80-yard drive, capped off by a 1-yard touchdown run by Markese Stepp to cut the Ducks' lead to 21-14.

Oregon punched a ticket to Friday's conference title game after north division champs Washington pulled out from the game due to a COVID-19 outbreak. The Ducks enter Friday's game with a 3-2 record.

The pandemic canceled Oregon's northwest rivalry game against the 3-1 Huskies.