The lawsuit claims that Clinton defamed Gabbard when she called her a Russian asset.

NEW YORK - Democratic presidential candidate Tulsi Gabbard filed a lawsuit against Hillary Clinton on Wednesday, claiming the 2016 nominee defamed her when she called her a "Russian asset" during an October podcast interview.

"Clinton lied about her perceived rival Tulsi Gabbard," the lawsuit, filed in U.S. district court in New York, read. "She did so publicly, unambiguously, and with obvious malicious intent. Tulsi has been harmed by Clinton’s lies — and American democracy has suffered as well."

In October, Clinton said that an unnamed Democratic presidential candidate was "the favorite of the Russians."

"I'm not making any predictions, but I think they've got their eye on somebody who is currently in the Democratic primary and are grooming her to be the third-party candidate," Clinton said, speaking on a podcast with David Plouffe, a former adviser to President Obama.

Although she never named Gabbard, a four-term congresswoman from Hawaii, there were just five women running for president at the time: Gabbard, Elizabeth Warren, Kamala Harris, Amy Klobuchar, Marianne Williamson. 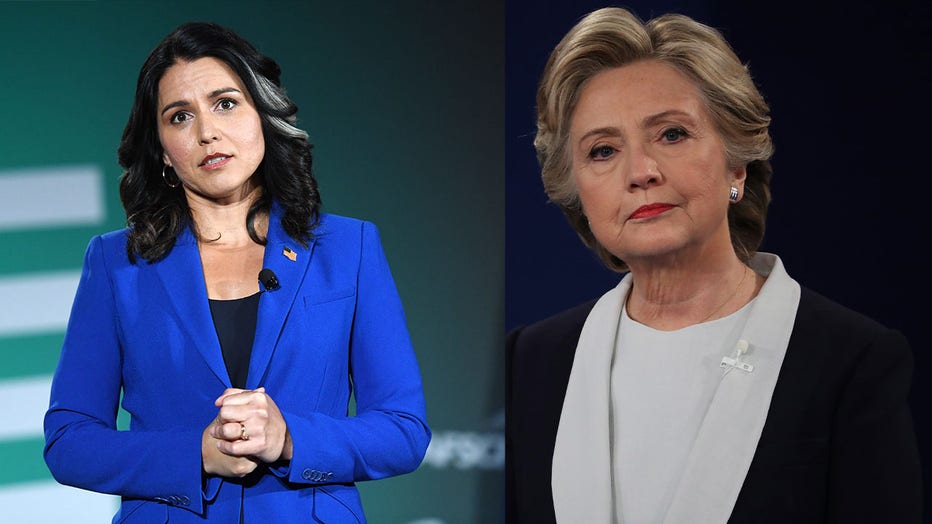 When a CNN reporter asked Clinton's spokesperson, Nick Merril, whether Gabbard, who has served in the Army National Guard, was the candidate she was referring to, he said: "If the nesting doll fits," a reference to Russian nesting dolls.

Gabbard's suit claimed she suffered "significant actual damages, personally and professionally, that are estimated to exceed $50 million — and continue to this day."

Clinton's remarks at the time ignited a political firestorm, evoking responses in defense of Gabbard from both President Trump and fellow Democratic presidential hopeful Bernie Sanders. Clinton has not responded publicly to the suit and did not immediately respond to a FOX Business request for comment.

Gabbard's suit suggests that Clinton targeted her with a false accusation for "retribution" over her endorsement of Sanders, Clinton's rival in the Democratic primary, in 2016. (Sanders eventually endorsed Clinton for president in July 2016).

"Tulsi was told that the Clinton team would never forget this," the suit says.

According to an aggregate of polls, Gabbard is currently in ninth nationally. She did not qualify for the December or January presidential debates.

Get updatess to this story on FoxBusiness.com.