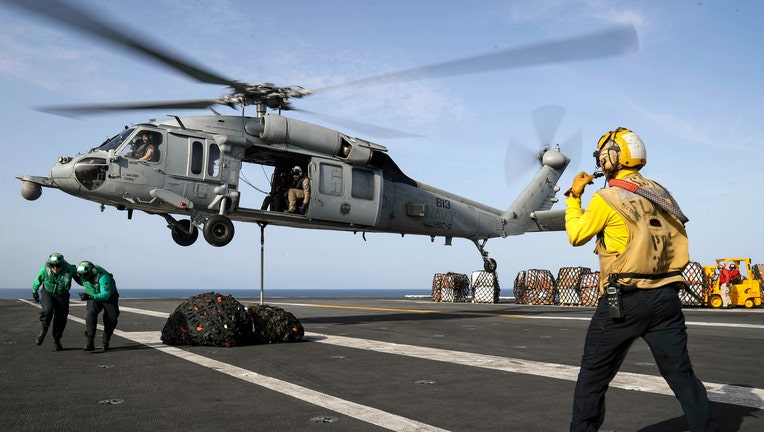 "If Iran wants to fight, that will be the official end of Iran," he tweeted. "Never threaten the United States again!"Iranian officials say the country is not looking for war. Trump had seemed to soften his tone after the U.S. recently sent warships and bombers to the region to counter an alleged, unexplained threat from Iran. On Thursday, when asked if the U.S. and Iran were headed toward armed conflict, he answered: "I hope not."

The U.S. Navy says it has conducted exercises in the Arabian Sea with an aircraft carrier strike group ordered to the Persian Gulf to counter an alleged, unspecified threat from Iran.

The Navy said Sunday the exercises and training were conducted with the USS Abraham Lincoln aircraft carrier strike group in coordination with the U.S. Marine Corps, highlighting U.S. "lethality and agility to respond to threat," as well as to deter conflict and preserve U.S. strategic interests.

Also taking part in exercises were the Kearsarge Amphibious Ready Group and the 22nd Marine Expeditionary Unit, both deployed to the U.S. Fifth Fleet area of operations in the Persian Gulf.

The Navy says the exercises, conducted Friday and Saturday, included air-to-air training and steaming in formation and maneuvering.