Large U.S. states that have issued stay at home orders due to coronavirus

Across the country, states are combating the spread of the novel coronavirus by issuing orders for residents to stay at home.

WASHINGTON (AP) - President Donald Trump said Monday that he wants to reopen the country for business in weeks, not months, and he claimed, without evidence, that continued closures could result in more deaths than the coronavirus pandemic.

"We can’t have the cure be worse than the problem," Trump told reporters at a press briefing, echoing a midnight Sunday tweet. “We have to open our country because that causes problems that, in my opinion, could be far bigger problems."

Trump acknowledged there were trade-offs, “there's no question about that," but claimed that, if closures stretch on for months, there would be “probably more death from that than anything that we're talking about with respect to the virus.”

The comments were further evidence that Trump has grown impatient with the pandemic, even before it has reached its expected peak. In recent days, tensions have been rising between those who argue the country needs to get back up and running to prevent a deep economic depression, and medical experts who warn that, unless more extreme action is taken, the human cost will be catastrophic.

Health experts have made clear that unless Americans continue to dramatically limit social interaction — staying home from work and isolating themselves — the number of infections will overwhelm the health care system, as it has in parts of Italy, leading to many more deaths. While the worst outbreaks are concentrated in certain parts of the country, such as New York, experts warn that the highly infectious disease is certain to spread.

But with the economic impact now snapping into focus with millions out of work, businesses shuttered and the markets in free fall — all undermining Trump's reelection message — the chorus of backlash is growing louder.

“We can't shut in the economy. The economic cost to individuals is just too great,” Larry Kudlow, Trump's top economic adviser, said in an interview Monday on Fox News Channel. “The president is right. The cure can't be worse than the disease, and we're going to have to make some difficult trade-offs.”

It's an opinion that has been echoed by others in the White House, some Republicans in Congress and on Fox, where host Steve Hilton delivered a monologue Sunday night that appeared to have, at least partially, inspired Trump's tweet.

“You know that famous phrase, the cure is worse than the disease? That is exactly the territory we're hurtling towards," Hilton told his viewers, describing the economic, social and human impact of the shutdown as an “even bigger crisis" than the virus.

“You think it's just the coronavirus that kills people? This total economic shutdown will kill people,” he said, pointing to growing poverty and despair.

The White House, which for the last two weeks has largely allowed doctors to lead the administration's response, already seemed to be shifting in that direction.

“I'm not looking at months, I can tell you right now," Trump said Monday, adding that America will soon be back open for business. He said, though, that states could continue to enforce stricter measures.

Even as Trump tweeted that he would be waiting until the end of the current 15-day period of recommended closures and self-isolation to make any decisions, the Centers for Disease Control and Prevention was exploring new guidance making it possible for people working in "critical infrastructure" jobs who have been exposed to the virus to return to work faster “by wearing a mask for a certain period of time,” Vice President Mike Pence said.

It's a change in tone that is drawing criticism from public health experts, who suggested Trump risks making a dangerous mistake if he sets up a conflict between public health and the nation’s economic well-being, given how unlikely it is that the threat posed by the virus will subside in another week.

If the U.S. stops social distancing too soon, “you will have more deaths and more dives in the stock market,” warned Lawrence Gostin of Georgetown University, a lawyer with extensive public health expertise.

And the outbreak could come surging back once people return to their normal routines of commuting, working, dining out and socializing — further stressing the economy. 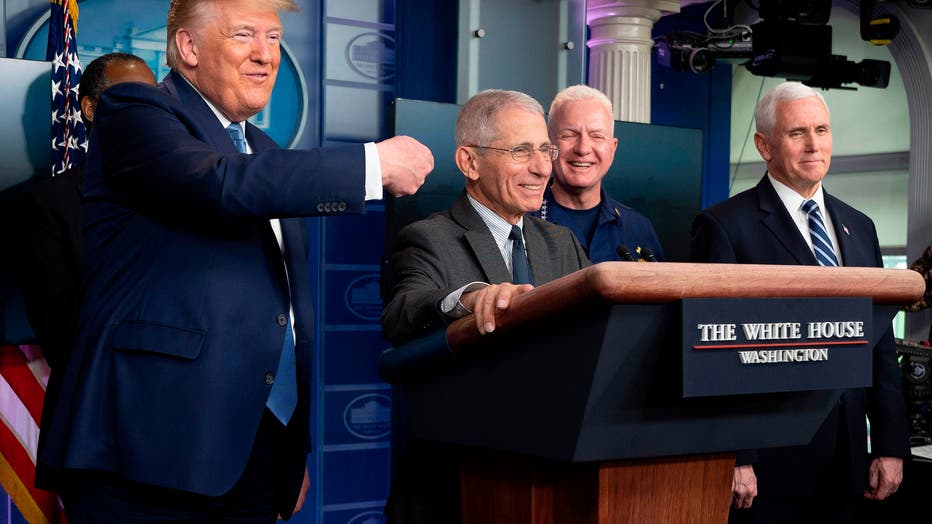 FILE -US President Donald Trump (L) gestures as National Institute of Allergy and Infectious Diseases Director, Dr. Anthony Fauci, speaks during the daily briefing on the novel coronavirus, COVID-19, at the White House on March 21, 2020, in Washingto (Photo by JIM WATSON/AFP via Getty Images)

John Auerbach, president of the nonpartisan Trust for America’s Health, which works with governments at all levels to improve preparedness for public health emergencies, said widespread illness and death also have a powerful economic impact that’s impossible to ignore or play down.

“If you don’t flatten the curve and minimize those who are getting infected, the amount of sickness will cripple business,” said Auerbach.

Even Republican Sen. Lindsey Graham of South Carolina, a close Trump ally, urged Trump to stick with the advice of public health officials.

“There is no functioning economy unless we control the virus,” he warned on Twitter. “Try running an economy with major hospitals overflowing, doctors and nurses forced to stop treating some because they can’t help all, and every moment of gut-wrenching medical chaos being played out in our living rooms, on TV, on social media, and shown all around the world.”

But Stephen Moore, a former Trump economic adviser, said it's time now “to start thinking about what kind of dramatic costs to society are we absorbing from the shutdown," including tens of millions unemployed and potential spikes in drug overdoses and suicides.

He said he has been urging his former colleagues to selectively open the economy in ways that minimize the public health risk with more testing and, for instance, taking people's temperature in public places, as they are now doing in other countries.

“There’s no good solutions here. There’s just bad solutions," Moore conceded. “And to me, the worst solution is to just grind our economy to a halt.”

Other economists warned that if Americans return to work too soon, there could be recurring outbreaks that would only worsen a recession. But if the period of isolation continues for too long, there will be a steep cost in trying to restart and sustain economic growth.

Joe Brusuelas, chief economist at the consultancy RSM, said lifting restrictions after 15 days would be “potentially a profound policy mistake" because it could lead to a second or third wave of outbreaks that would do even more harm to economic growth.

“We got one shot to get this all right,” Brusuelas said, noting that Trump has a great deal at stake personally, given the upcoming election in November. “The last thing one would want to do from an economic policy perspective is to elevate one's electoral interests above that of the economy or, most importantly, public health.”

Analysts at Morgan Stanley estimated Monday that the economy will shrink at a record-breaking annualized pace of 30% in the second quarter. The unemployment rate would surge to 12.8% — the highest level ever in data that go back to the 1940s. But this forecast assumes the outbreak peaks in late April, after which there would be fewer reasons to restrict economic activity, and a sharp rebound would begin in the June-August quarter, leading to solid growth in 2021.

Austan Goolsbee, an economist at the University of Chicago and a former adviser to President Barack Obama, says there is no real tension between containing the outbreak and preserving the U.S. economy. He has repeatedly emphasized that halting the outbreak is needed so that growth can resume as companies feel comfortable hiring and consumers ramp up spending.

“Anything that slows the spread of the virus is by far the best thing to restore the economy,” Goolsbee wrote on Twitter.

For most people, the coronavirus causes only mild or moderate symptoms, such as fever and cough. For some, especially older adults and people with existing health problems, it can cause more severe illness, including pneumonia. Worldwide, more than 375,000 cases have been reported, and while most people recover in weeks, more than 16,000 have died from the virus.