President Donald Trump's campaign manager Brad Parscale reportedly deleted the tweet and replaced it with the same text but with another photo of Air Force One flying above a sparser crowd this year.

DAYTONA BEACH, Fla. - President Donald Trump’s campaign manager Brad Parscale reportedly tweeted, then deleted a 2004 picture of Air Force One at Daytona 500 appearing to claim it was the president’s plane at the race held on Sunday.

The 2004 photo showed a large, packed crowd when former President George W. Bush attended the racing event on Feb. 15 that year. Bush appeared at the race also during his reelection year.

“.@realDonaldTrump won the #Daytona500 before the race even started,” Parscale reportedly tweeted on Sunday, with the 2004 photo. 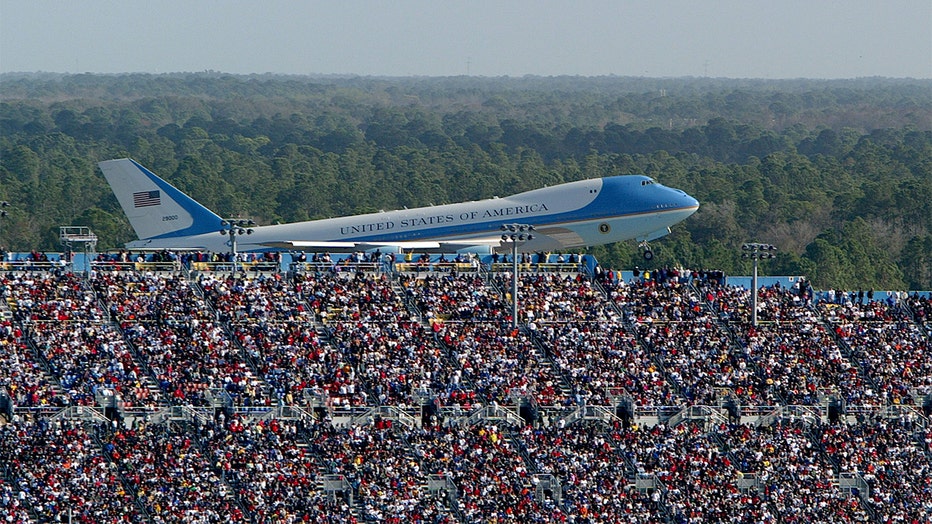 Air Force One takes off with US President Geore W. Bush aboard after attending the NASCAR Nextel Cup Daytona 500 on Feb. 15, 2004 at Daytona International Speedway in Daytona Beach, Florida. (Photo by Jonathan Ferrey/Getty Images)

Twitter users pointed out that the photo is dated. One of the users was Steve Herman, the White House bureau chief of Voice of America News, who tweeted that “the photo is from the George W. Bush presidency.”

Shortly after, Parscale deleted the tweet and replaced it with the same text but with another photo of Air Force One flying above a sparser crowd this year.

"I have a lot of talented colleagues photographing the Daytona 500 this year," Ferrey told CNN. "I am unfortunately not there today, but apparently I won the Daytona 500 photography before the race even started."

The Trump campaign did not immediately respond to a request for comment.

This is not the first instance of social media users noting alleged discrepancies in photos and messages that the Trump administration and campaign has shared online. Documents released in 2018 revealed that a government photographer edited official pictures of Trump’s inauguration to make the crowd size appear larger after the president personally intervened, the Guardian reported.

The files appeared to show that then White House press secretary Sean Spicer was “closely involved” in the effort to obtain more favorable photos.

“This was the largest audience to ever witness an inauguration – period,” Spicer eventually stated, albeit falsely, in a 2017 press briefing.

A spokeswoman for Spicer did not respond to a request for comment to the Guardian at the time.

On Sunday, Trump became the second president to ever attend the Daytona 500.

Following a recitation of the opening command, “Gentleman, start your engines,'' Trump got into his black limousine for a ceremonial spin around Daytona International Speedway.

Given the honor of grand marshal for the race, Trump gave thousands of fans a flyover of Air Force One and then rode onto the track in the presidential motorcade as the audience roared with delight. The motorcade took roughly a quarter lap before pulling aside to an infield staging area.