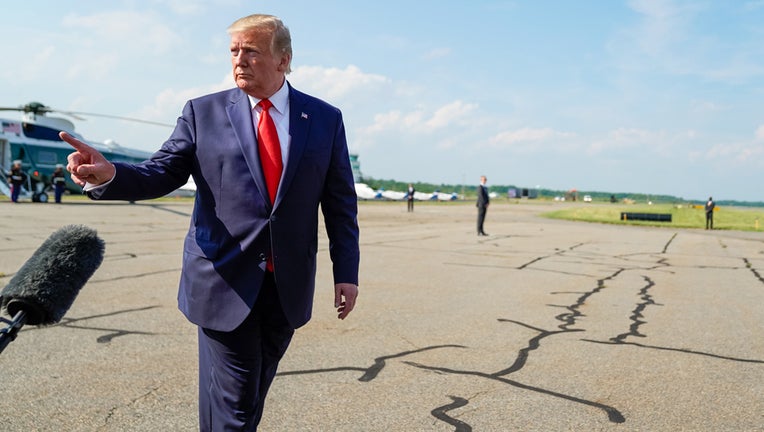 WASHINGTON (AP) -- President Donald Trump announced on Thursday that he is dropping his bid to include a citizenship question on the 2020 census.

Trump will pursue other avenues for demanding citizenship information after the Supreme Court blocked his census efforts.

Before Thursday's news conference, a senior administration official, speaking on condition of anonymity to preview the plans, said the president would be announcing new executive action as part of the effort but did not elaborate. Officials were still scrambling to finalize language in the hours after Trump's tweet.

Trump said last week that he was "very seriously" considering an executive order to try to force the citizenship question's inclusion, despite the fact that the government has already begun the lengthy and expensive process of printing the census questionnaire without it.

Any action to get past the Supreme Court ruling would likely draw an immediate legal challenge.

The congressional aide, as well as the current and former administration officials all spoke on condition of anonymity to discuss Trump's thinking in advance of a formal announcement.

Commerce's American Community Survey, which polls 3.5 million U.S. households every year, already includes questions about respondents' citizenship, so it is unclear what Trump has in mind.

Critics had warned that including the citizenship question on the census for the first time since 1950 would discourage participation, not only by those living in the country illegally but also by citizens who fear that participating will expose noncitizen family members to repercussions.

Keeping the prospect of adding the question alive could in itself scare some away from participating, while showing Trump's base that he is fighting for the issue.

Trump's 2016 campaign was animated by his pledge to crack down on illegal immigration, and he has tied the citizenship question to that issue, insisting the U.S. must know who is living here.

An executive order, by itself, would not override court rulings blocking the question, though it could give administration lawyers a new basis on which to try to convince federal courts the question passes muster.

Trump's administration has faced numerous roadblocks to adding the question, beginning with the ruling by the Supreme Court temporarily barring its inclusion on the grounds that the government's justification was insufficient. A federal judge on Wednesday also rejected the Justice Department's plan to replace the legal team fighting for inclusion, a day after another federal judge in Manhattan issued a similar ruling, saying the government can't replace nine lawyers so late in the dispute without satisfactorily explaining why.

Paul Clement, the Bush administration's top Supreme Court lawyer from 2004 to 2008, voiced doubt about whether the Supreme Court ultimately would sign off on any new efforts.

He said it's "a difficult question under the best of circumstances," but made even more difficult by the court's rejection of the Commerce Department's initial rationale for the question and a June 30 deadline cited repeatedly by the administration.

"I think that's a very different and much more difficult case," Clement said while speaking on a Wednesday panel.

Refusing to concede, Trump has insisted his administration push forward, suggesting last week that officials might be able to add an addendum to the questionnaire with the question after it's already printed. He has also toyed with the idea of halting the constitutionally mandated survey while the legal fight ensues.

Trump has offered several explanations for why he believes the question is necessary to include in the once-a-decade population count that determines the allocation of seats in the House of Representatives for the next 10 years and the distribution of some $675 billion in federal spending.

"You need it for Congress, for districting. You need it for appropriations. Where are the funds going? How many people are there? Are they citizens? Are they not citizens? You need it for many reasons," he told reporters last week, despite the fact that congressional districts are based on total population, regardless of residents' national origin or immigration status.

If immigrants are undercounted, Democrats fear that would pull money and political power away from Democratic-led cities where immigrants tend to cluster, and shift it to whiter, rural areas where Republicans do well.

Senate Democratic Leader Chuck Schumer on Thursday called Trump's efforts "outrageous" and accused him of pushing the question "to intimidate minorities, particularly Latinos, from answering the census so that it undercounts those communities and Republicans can redraw congressional districts to their advantage."

"He thinks he can just issue executive orders and go around the Congress, go around established law and try to bully the courts," Schumer said from the Senate floor. He predicted the effort would be thwarted by the courts.

House Democrats next week will vote on holding Attorney General William Barr and Commerce Secretary Wilbur Ross in contempt for their failure to comply with congressional subpoenas investigating the issue.

Thomas Homan, the former acting director of Immigration and Customs Enforcement and a Trump ally, has argued in recent interviews that Democrats oppose the question because, if more people living in the country illegally are counted in the census, more seats will be allocated to Democratic states, resulting in more Electoral College votes.

Alarmed by last week's change of course by the administration, the plaintiffs in the New York census citizenship case already have asked U.S. District Judge Jesse Furman to permanently block the administration from adding the question to the 2020 census. Furman has set a July 23 hearing on the request.