SACRAMENTO, Calif. - Since California adopted the nation’s first ban on single-use plastic shopping bags in 2014, most grocery stores have turned to thicker, reusable plastic bags that are supposed to be recyclable.

But Attorney General Rob Bonta is now investigating whether the bags are truly recyclable as required by law.

"We’ve all been to the store and forgotten to bring our reusable bags," Bonta said recently. "At least the plastic bags we buy at the register for 10 cents have those ‘chasing arrows’ that say they are 100% recyclable, right? Perhaps wrong."

He asked six bag manufacturers to back up their claims that the bags can be recycled and threatened legal action that could include banning the bags temporarily or issuing multimillion-dollar fines.

His office declined to say last week how many of the companies responded, citing an ongoing investigation. The American Chemistry Council, a plastics industry group, said that manufacturers disagree with Bonta’s characterization.

Other states, including New York, New Jersey and Oregon, have followed California in banning single-use plastic bags. Beyond California, only a handful of states require that stores take back plastic bags for recycling, with Maine first adopting such a law in 1991, according to the National Conference of State Legislatures. 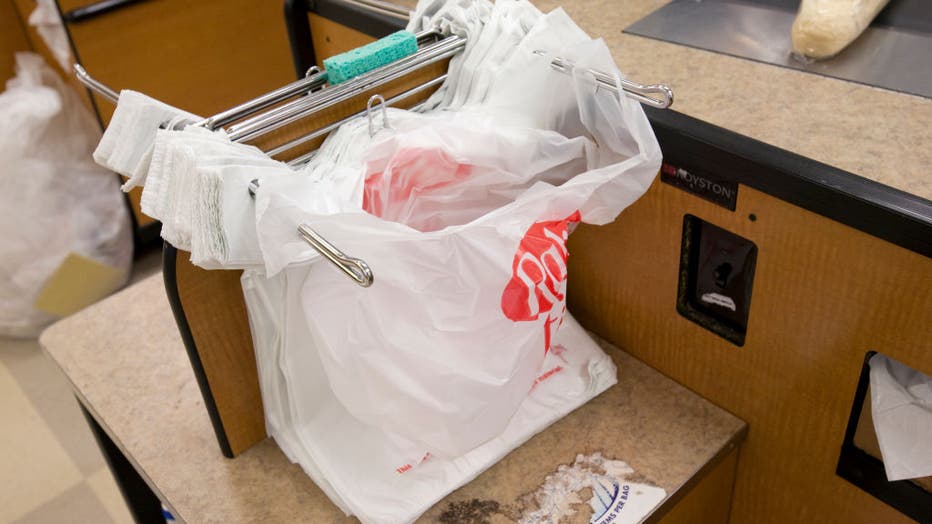 Plastic bags in supermarket. (Photo by: Education Images/Citizens of the Planet/Universal Images Group via Getty Images)

Policy experts and advocates estimate that just 6% of plastics are recycled in the United States, with the remaining burned, trashed or littered. More plastic bags ended up in California landfills in 2021 compared with 2018, according to data from the state’s recycling department.

Consumers are supposed to be able to return their plastic bags to grocery stores and other retailers. But many removed their bag recycling bins during the early days of the pandemic, fearing contamination.

For the system to work, retailers must collect the bags and sell them back to manufacturers for use in making new bags that must include 40% recycled content and be reusable at least 125 times. Murray suspects that most are reused once to hold other trash.

"That’s not meeting the standard and it may be time to phase these bags out," he said.

As of now, makers of the bags get to self-certify to the state that their bags can be recycled. But Bonta said that requires a comprehensive system to collect, process and sell the used bags, none of which exist. Putting the bags in most curbside recycling bins interferes with recycling other products by clogging equipment and increasing the risk of worker injury, he said.

Plastic bags and similar products are "a top form of contamination in curbside recycling bins," California’s Statewide Commission on Recycling Markets and Curbside Recycling wrote in a 2021 report.

Bonta asked six manufacturers — Novolex, Revolution, Inteplast, Advance Polybag, Metro Polybag and Papier-Mettler — to prove their bags can be recycled in California. His office hasn’t said if they all responded, citing an "active and ongoing investigation."

Revolution Chief Executive Sean Whiteley said the company has been recycling more than 300 million pounds of plastic material annually for decades and is "confident in our own sustainability and compliance record."

He noted lawmakers publicly introduced the single-use bag ban legislation in 2014 at one of the company’s Southern California subsidiaries.

"At our core, we are an environmental recycling company that also makes sustainable plastic solutions," he said in a statement.

Novolex said it is "committed to complying with all state laws and regulations." The company responded to Bonta’s request but declined to share its full response with The Associated Press, a spokesman said.

Novolex’s bags have been certified as eligible for recycling by an independent laboratory and, therefore, must be marked that way, the company said in a statement.

The other four companies did not respond to multiple emailed requests.

Manufacturers are "aggressively working so that all plastic packaging that is manufactured is remade into new plastics," said Joshua Baca, vice president of plastics at the American Chemistry Council.

It’s not Bonta’s first plastics-related clash with industry. Earlier this year he subpoenaed ExxonMobil as part of what he called a first-of-its-kind broader investigation into the petroleum industry and the proliferation of plastic waste.