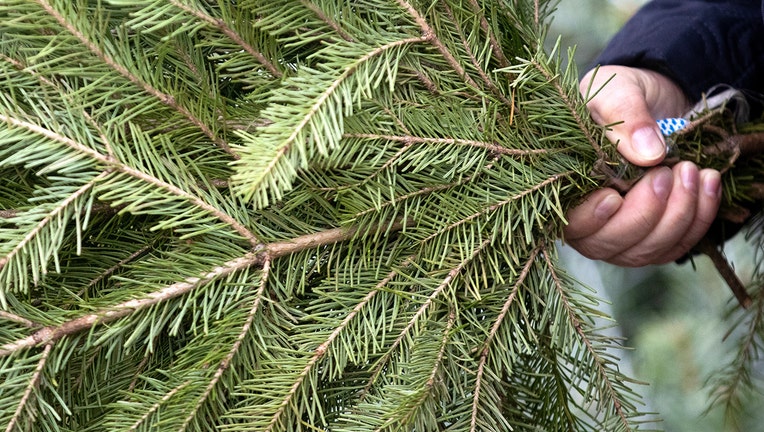 FILE: A man holds a fir tree branch. Old Christmas trees are being collected by a Texas man who is transforming them into canes for veterans. (Sergei BobylevTASS via Getty Images)

COPPERAS COVER, Texas - A central Texas man was overwhelmed by the response after he put out a call asking his local community to donate their leftover Christmas trees to him instead of throwing them out so that he could turn them into canes for veterans in need.

Jaime Willis, the owner of Canes for Veterans Central Texas, says that he has received about 500 Christmas trees so far and still expects another 500 before the holiday season is over — all of which will be transformed into walking canes for veterans that are given out free of charge.

A veteran himself, Willis said that he first started using a cane in 2016, but he hated the one provided for him through Veterans Affairs.

Searching on Facebook for an alternative, Willis came across the group Free Canes for Veterans. It’s run by Oscar De Vere Morris, who, at the time, was making 500 canes and said he couldn’t add Willis to his list of recipients. Instead, he offered his insights to Willis and passed on the knowledge of how to make canes.

“The next thing I knew I had made my first cane,” said Willis. “That’s when I started Canes for Veterans Central Texas.”

Willis said that it can take anywhere from one day to a full week to make a cane, depending on how decorated it is.

"The whole process, it's just done off donations. I make the canes myself. Everything's done out of pocket," he told KXXV.

So many people responded to Willis’s request for donated Christmas trees that he has even had to politely turn some of them away, though he thanks anyone interested for their kindness.

As he works to transform the hundreds of donated Christmas trees into canes that will support our nation’s veterans, Willis will be needing plenty of woodworking supplies, such as grinder discs, sandpaper, polyurethane and paintbrushes. Anyone who wishes to contribute to his cause is welcome to make a donation for supplies to Willis’s GoFundMe.