NEW YORK - Pop superstar Taylor Swift was among the honorees and speakers at New York University's commencement exercises on Wednesday.

Swift smiled and waved to the cheering crowd as she walked around the infield of Yankee Stadium in her cap and gown.

Eleven-time Grammy winner Swift, who has a home in Manhattan's TriBeCa neighborhood, received an honorary Doctor of Fine Arts. The degree is her first.

"You are a role model around the world," the school announced as she was awarded the degree to loud cheers and applause.

Taylor Swift was the star of NYU commencement

Swift then spoke to the crowd.

"Let me just say that I'm elated to be here," Swift said.  "Welcome to New York. It's been waiting for you."

Swift joked that she is not "the type of doctor you want around in an emergency."

Taylor Swift is given a degree

She also gave some ‘life hacks’ to the graduating class.

"Life can be heavy especially if you try to carry it all at once," Swift said. "You can't carry all things."

The class of 2022 is being honored in one ceremony, while the classes of 2020 and 2021 will be honored after their own in-person graduation services were canceled due to the coronavirus pandemic.

When announcing her appearance at the graduation, NYU said in a news release: "Ms. Swift is one of the most prolific and celebrated artists of her generation. She is the only female artist in history to win the music industry’s highest honor, the Grammy Award for Album of the Year, three times." 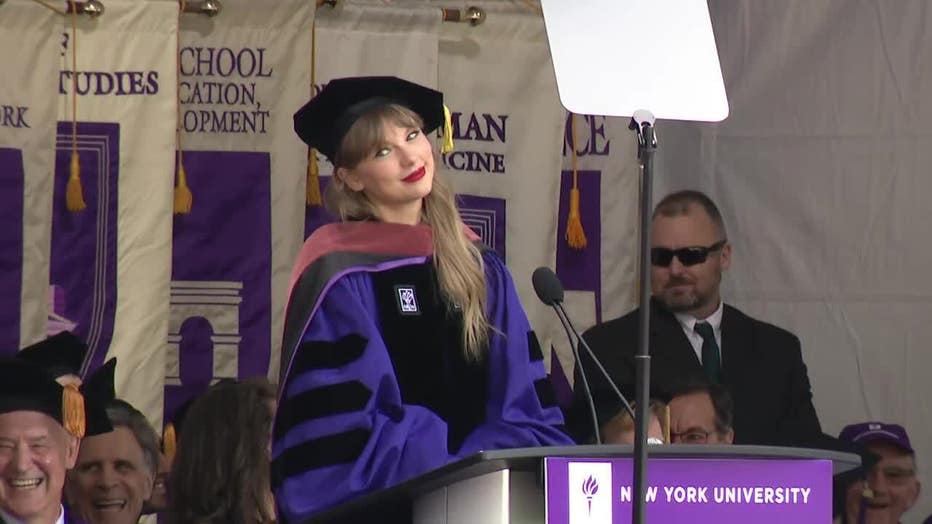 Swift was being joined by disability rights activist Judith Heumann who was to address the graduates at the 2020-2021 combined ceremony. Honorary degree recipients also include Lonnie Bunch III, Susan Hockfield, Jill Lepore, and Félix Matos Rodríguez.