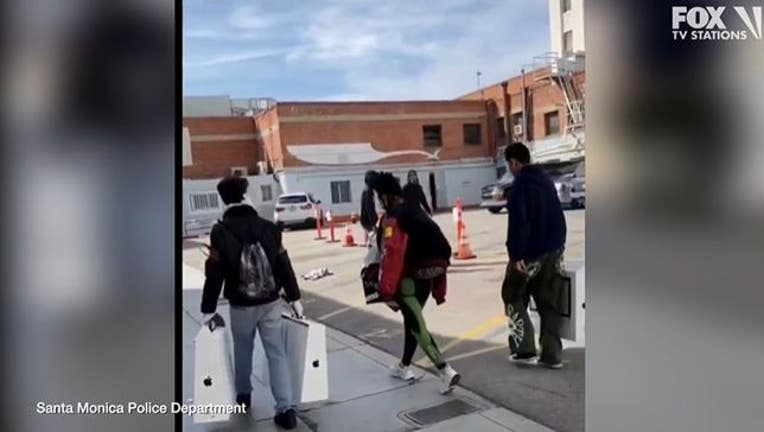 SANTA MONICA, Calif. - Three teenagers have been arrested for allegedly looting and setting the  popular Sake House in Santa Monica on fire.

Police say the incident occurred on May 31st, while several protests were happening throughout the city and county of Los Angeles.

On July 1st, the Santa Monica Police Department and Alcohol Tobacco and Firearms (ATF) served search and arrest warrants in West Hills and Chatsworth to follow up on an arson case.

Police say they were seen setting fire to the Sake House and looting at REI, Brandy Melville, Vons, Magicopolis, Salon Viva, Wasteland and the Shoe Palace.

RELATED: Reward offered for info leading to arrest of suspects who burned down Sake House in Santa Monica

They looted clothes, computers, backpacks, a bicycle and grocery items. Police say evidence was recovered during the search warrants.

A criminal complaint charges Tillmon with one count of arson, a felony offense that carries a mandatory minimum of five years in federal prison and a maximum sentence of 20 years.

According to the affidavit in support of the criminal complaint, security video from the restaurant shows Tillmon removing "a red tube-shaped object from his jacket, which he placed behind the reception desk area of the restaurant before walking away. Within seconds of that action, smoke and fire appeared from the area.''

Investigators with the Santa Monica Fire Department determined that the fire was caused by the red object that Tillmon allegedly placed in the restaurant, which is at the corner of Santa Monica Boulevard and Fourth Street.

Tillmon was also linked to the fire when investigators uncovered a video showing his white Ford Explorer parking next to the Sake House four minutes before the fire started and then reversing across the street soon after the fire started, according to the affidavit.

That same video allegedly shows the Explorer parking about 500 feet away from the Sake House, and Tillmon exiting the vehicle and looting a nearby business, according to the U.S. Attorney's Office.