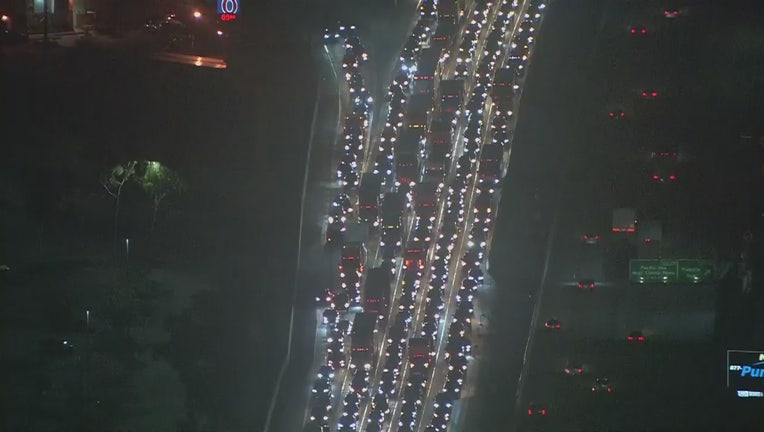 BALDWIN PARK, Calif. - A motorist was killed Wednesday morning in a three-vehicle crash on the 10 Freeway in Baldwin Park, and another driver was arrested for allegedly driving while impaired, authorities said.

The crash occurred about 4 a.m. on the westbound 10 Freeway west of Francisquito Avenue, the California Highway Patrol reported.

A 55-year-old man from Montclair in San Bernardino County, who was driving a 1993 Nissan pickup truck, died at the  scene, according to the CHP.

His name was withheld, pending notification of his relatives.

Ana Guillen, 57, of West Covina, who was driving a 2016 Hyundai Santa Fe SUV, was arrested on suspicion of "driving under the influence of alcohol and drugs," the CHP reported. Guillen, who was not injured, was taken to a hospital for a mental health evaluation, the CHP reported.

Luis Uribe, 37, of Covina, who was driving a 2018 Honda Accord, was hospitalized for treatment of a fractured back.

According to a CHP statement, Guillen was driving her Hyundai in the No. 5 lane "either at a slow speed or had come to a stop ... (and) the right side of the Nissan sideswiped the left rear of the Hyundai."

"The Nissan spun out of control and came to a stop facing in a northerly direction, straddling the middle lanes," the CHP said. "Mr. Uribe ... attempted to avoid the Nissan. However, the front end of the Honda collided with the right front side of the Nissan pickup."

It's unknown if the Nissan driver ``was standing outside or sitting inside of his vehicle,'' according to the CHP. ``As a result from the second collision, (the Nissan driver) sustained fatal injuries.''

Anyone with information on the case was urged to call the CHP Baldwin Park Area office at 626-338-1164.