Student loan payments were scheduled to resume May 1 after being halted since early in the pandemic. But following calls from Democrats in Congress, the White House plans to give borrowers additional time to prepare for payments.

WASHINGTON - The Biden administration plans to freeze federal student loan payments through Aug. 31, extending a moratorium that has allowed millions of Americans to postpone payments during the coronavirus pandemic, according to an administration official familiar with the White House's decision-making.

Student loan payments were scheduled to resume on May 1 after being halted since early in the pandemic. But following calls from Democrats in Congress, the White House plans to give borrowers additional time to prepare for payments.

The action applies to more than 43 million Americans who owe a combined $1.6 trillion in student debt held by the federal government, according to the latest data from the Education Department. That includes more than 7 million borrowers who have defaulted on student loans, meaning they are at least 270 days late on payments.

Borrowers will not be asked to make payments until after Aug. 31, and interest rates are expected to remain at 0% during that period.

The extension was first reported Tuesday by Bloomberg.

What is the Public Service Loan Forgiveness program?

The Public Service Loan Forgiveness program began in 2007 as a reward for college students who go into public service but has been criticized for its complex requirements in the past.

Democrats on education panels in the House and Senate recently urged President Joe Biden to extend the moratorium through the end of the year, citing continued economic upheaval.

"It is ruining lives and holding people back," she said in a statement last month. "Borrowers are struggling with rising costs, struggling to get their feet back under them after public health and economic crises, and struggling with a broken student loan system — and all this is felt especially hard by borrowers of color."

Murray called on the Biden administration to lift all borrowers out of default to provide a "fresh start" following the pandemic.

The decision is being made amid rising concern that large numbers of Americans would quickly fall behind if payments restarted in May.

In March, the St. Louis Federal Reserve Bank warned that resuming loan payments could place a heavy burden on borrowers who faced financial hardship during the pandemic. It said the impact would be hardest on Black families, who are more likely to rely on student loans to pay for college. 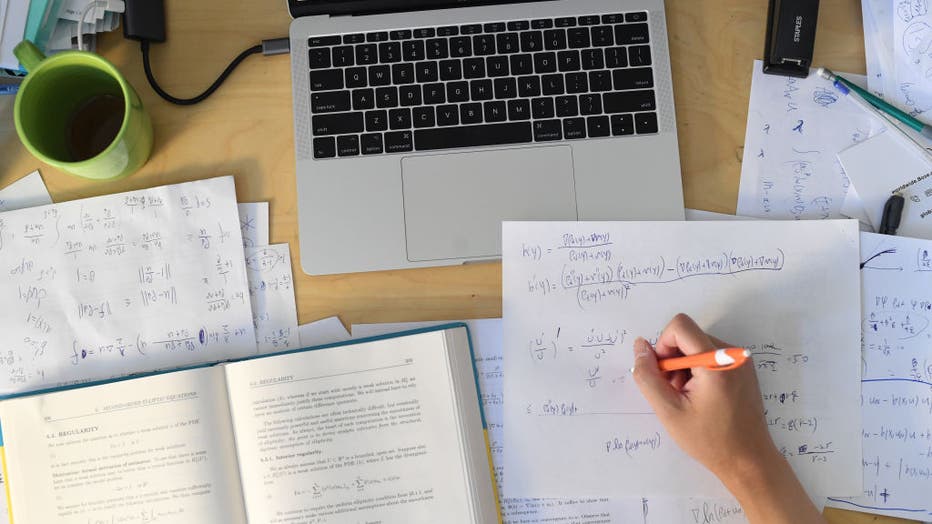 FILE IMAGE - A study sits at a desk in a file image taken on June 14, 2021, in Boulder, Colorado. (Photo by RJ Sangosti/MediaNews Group/The Denver Post via Getty Images)

"Serious delinquency rates for student debt could snap back from historic lows to their previous highs in which 10% or more of the debt was past due," the bank said.

It remains in question whether Biden will pursue widespread debt forgiveness to reduce the nation’s student debt. Some Democrats in Congress have pressed Biden to use executive action to cancel $50,000 for all student loan borrowers, saying it would jumpstart the economy and help Black Americans who on average face higher levels of student debt.

Last year, Biden asked the Education and Justice departments to review the legality of widespread debt cancellation, but no decision has been announced. Biden previously said he supports canceling up to $10,000, but he argued it should be done through congressional action.